Rubio said it would be a "crime against humanity" to not let US aid flow into Venezuela. A fierce supporter of acting President Juan Guaido, he has been a central architect of White House policy toward Nicolas Maduro. 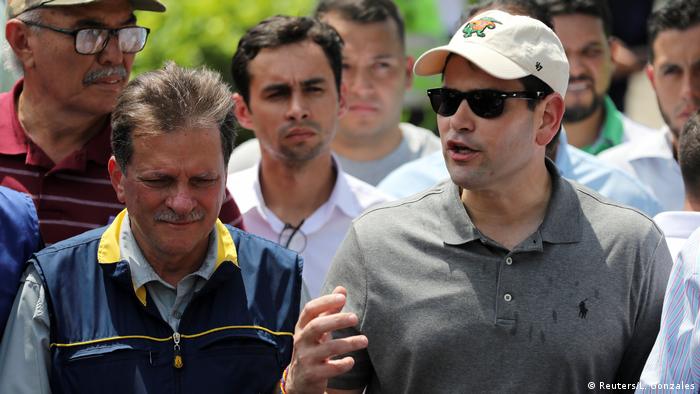 US Senator Marco Rubio on Sunday traveled to the Colombian city of Cucuta, the border city now serving as a distribution point for US aid as part of interim President Juan Guaido's push to bring humanitarian assistance to the economically crippled nation.

Guaido wants the aid to flow into the country from Colombia, Brazil and Curacao and has said he would provide details of his plan on Monday. Acting President Nicolas Maduro has so far staunchly refused to accept the humanitarian assistance.

Rubio led a US delegation in Cucuta to inspect US aid on the ground and to send a strong message to the Maduro regime. The Florida senator traveled with Carlos Trujillo, the US ambassador to the Organization of American States, and US Representative Mario Diaz-Balart, whose congressional district in Florida is home to a burgeoning Venezuelan exile community.

"One thing is to see human suffering, another is to see it up close and personal and to meet the people and hear their stories," Rubio said. "What is happening in Venezuela is a man-made crisis of epic proportions," he emphasized.

Rubio has been a harsh critic of the Venezuelan government throughout his political career. He frequently refers to Maduro as a "dictator" and has long supported the Venezuelan opposition movement, tying their struggle to that of Cuban exiles fighting the regime of Fidel Castro.

That tough stance in support of democratic transitions for Cuba and Venezuela has won him the support of a critical exile community voting base in Miami, where he himself was born to Cuban parents. The senator is said to have played a significant role in convincing the Trump administration to confront Maduro, having been in frequent contact with the White House on the issue since the president was inaugurated in 2017.

Rubio: Refusal of aid would be 'a crime'

On Sunday, Rubio visited a distribution center for US aid, where he said that if soldiers loyal to socialist President Maduro were to block the entry of food, it would amount to a "crime against humanity." Speaking in Spanish, the senator said that soldiers who block aid would spend "the rest of their lives hiding from justice."

During his tour of Cucuta, Senator Rubio also visited the actual border point where containers and overturned trucks had allegedly been placed by the Maduro regime in an effort to block deliveries into Venezuela.

"Those containers behind us were put there by a terrorist, criminal regime. It isn't going to work. Food and medicine will reach the people of Venezuela," Rubio tweeted.

So far, three US military cargo planes delivered several dozen tons of food assistance to Cucuta on Saturday, and one more aircraft is set to land in Curacao, a Dutch island off the coast of Venezuela, on Tuesday.

Another aid collection point for Brazilian aid will also open on Monday at the border, Guaido's team said.

Nicolas Maduro has rejected the aid push, saying that it represents "crumbs" and that the US was sending "rotten and contaminated food." The embattled president has blamed shortages of food and medicine on US sanctions.

More than 3 million people have fled Venezuela in recent years. And many companies have moved away, as well. But Thilo Schmitz, a German-Venezuelan businessman, remains optimistic that better days are around the corner. (15.02.2019)

The United States and Russia are odds over the power struggle unfolding in Venezuela. As the two traditional rivals vie for influence, China has been quietly growing its footprint in the region, says Alexander Busch. (13.02.2019)