Recent violence in Venezuela has steeled US resolve to support Juan Guaido, US Vice President Mike Pence has said while meeting the interim president in Bogota. The EU has rejected the idea of a military intervention. 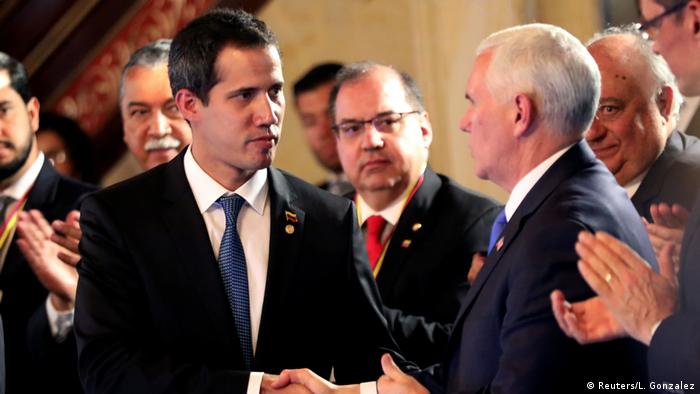 Washington will impose new sanctions against officials in Nicolas Maduro's government, US Vice President Mike Pence has said in Colombia at a summit of the Lima Groupregional bloc.

Pence praised Maduro's rival, interim President Juan Guaido, after meeting with him in Bogota, saying he admired the 35-year-old's "courage" in taking a stand against the "dictatorship" of his socialist opponent. Pence also relayed a message from President Donald Trump, telling Guaido "we are with you 100 percent."

The US and key Western nations have recognized Guaido as interim president of the socialist-ruled country, which remains controlled by Maduro.

Guaido, who defied a government travel ban to go to Colombia in an attempt to force desperately needed humanitarian aid into his country, has vowed to return to Venezuela "this week." The effort might be complicated by a Supreme Court ruling last month that barred him from leaving the country.

Colombian Foreign Minister Carlos Holmes Trujillo said the opposition leader and his family faced "serious and credible" threats to their lives, and warned that if they were to materialize, a forceful international response would follow.

Pence said Monday that the weekend's deadly violence in Venezuela, which saw troops loyal to Maduro fire tear gas and buckshot at activists trying to deliver aid, had only boosted the US resolve in supporting Guaido.

He called on members of the Lima Group to follow the US in freezing assets of Venezuela's oil company PDVSA.

In a televised speech, the vice president urged the "good people of Venezuela" to seek their "freedom."

Aid blockade a 'crime against humanity'

The Lima Group, comprised of over a dozen Latin American countries and Canada, held the meeting in Bogota to explore new ways of pressuring Maduro to step down. Guaido told reporters that Maduro's regime was "usurping power."

"Indulging the usurpation of power would be a threat to all of America," he said.

Lima Group members urged the International Criminal Court to declare Maduro's refusal to allow in humanitarian aid a "crime against humanity," and called on the UN to join the international effort to solve the crisis.

In the Bogota summit's statement, the group said it was not advocating for a military solution. "The transition to democracy must be conducted peacefully by Venezuelans within the framework of the constitution and international law, supported by political and diplomatic measures, without the use of force," the document said.

Earlier Monday, the EU rejected the use of force against Maduro.

"What is explicitly quite clear, from our point of view, is that we need a peaceful political and democratic and Venezuelan-owned resolution of this crisis," she added.

Read more: Who has the military support in Venezuela?

China has also stated its opposition to "intervention by external forces in the internal affairs of Venezuela."

Beijing "opposes using the so-called humanitarian aid to serve political ends and stir up instability and even turmoil in Venezuela and its neighborhood, which is not in the interests of any party," foreign spokesman Lu Kang told reporters.