A group of countries from the Americas says it will scale down diplomatic relations with Venezuela after what it described as an illegitimate presidential election. The 14 states have pledged to recall their ambassadors. 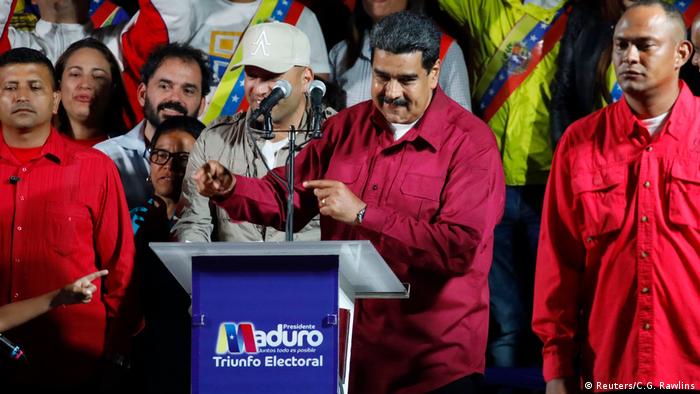 The Lima Group of Latin American countries plus Canada said in a scathing statement on Monday that it did not recognize the result of Venezuela's presidential election and urged a swift response.

Socialist leader Nicolas Maduro was re-elected for another six-year term on Sunday in a highly controversial vote that was boycotted by the opposition and condemned internationally.

In its statement, the 14 Lima Group nations vowed to recall their ambassadors and summon Venezuelan envoys stationed in their capitals, saying the vote failed to meet "international standards for a free, fair and transparent democratic process."

The bloc also voiced alarm over the "serious humanitarian situation" and announced plans to hold a meeting in Peru next month to respond to the Venezuelan refugee crisis.

It also urged international financial bodies to block new loans to the Venezuelan government and called on authorities in each of their countries to alert the financial sector to the risks of doing business with Caracas.

According to official election results, Maduro won with nearly 68 percent of the vote, well ahead of his closest challenger, Henri Falcon, who finished on 21 percent.

The statement from Lima adds to growing international pressure on Maduro in the wake of the weekend vote. US State Department officials called it a "sham" and repeated threats to impose sanctions on Venezuela's crippled oil sector.

Venezuela's prolonged economic crisis has led to widespread food and medicine shortages, violent unrest and the exodus of more than a million people over the past two years.

Critics accuse Maduro of gross mismanagement and attempting to stifle dissent, but the socialist leader says his country is the victim of an "economic war" waged by the United States.

Read more: The Summit of the Americas warns Venezuela

About a third of voters had cast their ballots by mid-morning, according to the government. With the main opposition boycotting the vote, President Nicolas Maduro is expected to win. (20.05.2018)