The World Food Program director called on the US and other nations to provide financial assistance to Colombia. NGOs have tried to help Venezuelans directly, but President Maduro has repeatedly refused humanitarian aid. 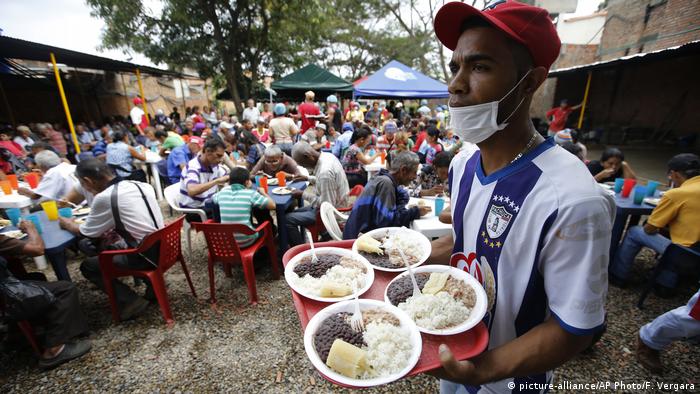 The World Food Program director, David Beasley, urged the international community on Tuesday to help Colombia handle the humanitarian "catastrophe" that is unfolding at the border with neighboring Venezuela.

Beasley delivered the warning after a two-day visit to the Colombian border city of Cucuta, where he gathered testimony from Venezuelans who had crossed the border.

"I asked, 'Why are you here?', and the answer people gave me was, 'We don't have any food.' And they said, 'Even if we had money, there's no food,'" Beasley recounted. "I don't think people around the world realize how bad the situation is and how much worse it could very well be," the WFP director said.

"This could turn into an absolute disaster in unprecedented proportions for the Western Hemisphere," Beasley warned.

The Venezuelan exodus has sparked alarm across Latin American nations. It is estimated that as many as 3 to 4 million Venezuelans have emigrated, with several hundred thousand in 2017 alone. The bulk of these migrants in 2017 have fled to neighboring Colombia. The Colombian Ministry of Defense, Luis Carlos Villegas, said that there were approximately 700 thousand Venezuelan immigrants registered in the country.

While Beasley said Venezuela's humanitarian crisis was not being driven by an armed conflict, he also warned that the crisis could worsen. He pointed to the example of Syria, a country with a smaller population than Venezuela, which began with a minor food emergency and now has 6 million people a day that need UN food assistance.

As hyperinflation and widespread shortages of food and medicine batter Venezuela, the UN has offered to assist the South American nation directly. Yet, President Nicolas Maduro has repeatedly rejected offers of humanitarian aid, claiming that these are veiled attempts by the US and others to destabilize his government.

Now the WPF director is urging the US and other nations to provide financial assistance to Colombia. The food NGO already has an established presence in Colombia, where it had helped feed those displaced by the country's half-century guerrilla conflict and it is currently working with the government to help meet its malnourishment eradication goal by 2030.

Beasley stressed the importance of shielding Colombia from the adverse effects that Venezuela's crisis could bring. "Colombia has made so much progress in the past many years with peace and the last thing it needs now is for all that success to be undone," he said.

On Saturday, the UN Refugee Agency asked countries in the region to share the burden of the Venezuelan refugee tide and appealed for countries to allow them in and provide them the necessary protections.