US troop drawdown from Sahel puts pressure on Europe | World | Breaking news and perspectives from around the globe | DW | 31.01.2020

US troop drawdown from Sahel puts pressure on Europe 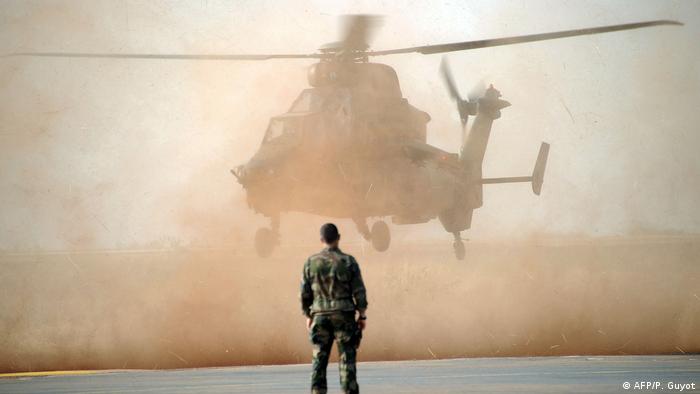 US Defense Secretary Mark Esper said Thursday the move is part of a global pivot designed to refocus more military resources towards China.

While Esper underlined that the US would not "totally withdraw forces from Africa," the head of US Africa Command (AFRICOM) Stephen Townsend warned an abrupt end to support for France against militants in the Sahel would "not go in a good direction."

The area has seen the most rapid increase in violent extremist activity across the continent, according to the Africa Center for Strategic Studies.

Although it is still unclear what shape the review may take, Kamel Ben Younes, president of the Tunisian Ibn Rushd Institute for Arab and Africa Studies, told DW that a new strategy to reassign troops away from conflicts in the west is likely.

"It won't be a complete departure of American or NATO forces but a redeployment … moving from areas of conflict and high risk like Somalia and Mali to safer places like Djibouti," Younes said, as Trump tries to shore up public opinion ahead of elections in November.

Read more: US reduces troops in Africa, focuses on training rather than combat

While the US currently has 4,000 personnel stationed at its only permanent African base in Djibouti in the east, it has more than 1,100 troops in the west. But after the 2017 deaths of four US soldiers in Niger, American lawmakers were alarmed they had so many troops at risk in a conflict they knew little about.

In December, The New York Times reported a recently-completed, $110 million (€99 million) drone base in Niger may also be abandoned.

However, Charles Gurdon, managing director of the risk consultancy group Menas Associates, told DW that while the US may be pulling its special forces out of the region, it will not abandon drone operations against militants in Libya and, more recently, Mali.

"The US considers the Sahel as France's domain and certainly Europe's problem, and therefore it wants as little to do with it as possible," Gurdon said. But "counterterrorism remains the American priority and that's why, having spent so much on the drone base in the north of Niger, that isn't going to change."

AFRICOM head Stephen Townsend acknowledged US drones were better equipped than those of France, whose more than 4,500 troops lead contingents from the G5 countries of Mauritania, Mali, Burkina Faso, Niger and Chad in efforts against militant radicals in the area. But US airlift and refueling support for Operation Barkhane is estimated to cost around $45 million, roles Townsend said other European countries "can and should" take on.

While any drawdown will be "damaging" said Gurdon, it comes at a time when violent extremism is rising and European support flagging.

In Burkina Faso, Mali and Niger, attacks have doubled year-on-year since 2015, resulting in around 2,600 fatalities in 2019, according to the Pentagon-linked Africa Center for Strategic Studies.

Such figures have prompted French domestic public opinion to question the effectiveness of the mission, after a helicopter accident in November killed 13 soldiers. Numerous experts have suggested that mere military intervention has done little in addressing core social and political issues in those countries.

Public opinion in several countries across the Sahel is also turning against France's role in propping up ineffective governments.

At a conference earlier this month, France pledged a further 220 troops while French and West African leaders agreed to new measures including a group of European special forces called "Takuba."

But further commitments from countries such as Germany, which has 1,100 troops in Mali as part of a UN mission, have seemed less likely, after it twice rejected joining Takuba last year.

That may be changing, as German Defense Minister Annegret Kramp-Karrenbauer pledged last year to boost defense spending over the next decade. Wolfgang Schäuble, Germany's parliamentary president, then said this week that Germany needed to take more responsibility in military affairs and not simply shirk international security obligations due to its aversion to repeating the militaristic horrors of its past.

"When France asks us to do more about the security situation in Mali, our responses do not trigger enthusiasm in Paris," Schäuble said. "The lessons from Auschwitz cannot be an argument for not taking on a permanent commitment."