Will new measures to fight terrorism in the Sahel region be enough? | Europe | News and current affairs from around the continent | DW | 13.01.2020

Will new measures to fight terrorism in the Sahel region be enough? 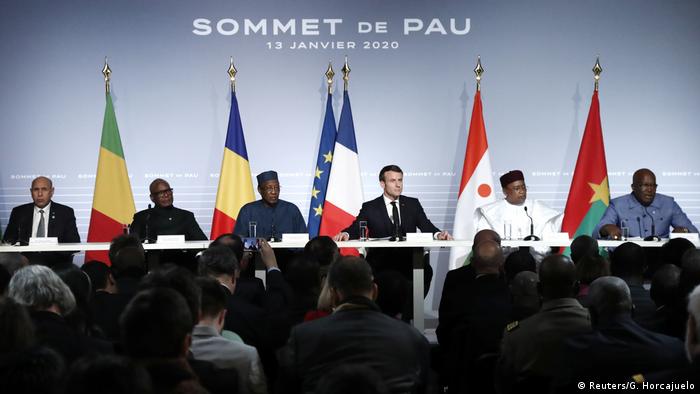 The message was unequivocal. "We need rapid results because what's at stake is the credibility of every country present here — we need to show that we are capable of facing this challenge," said Roch Marc Christian Kabore, president of Burkina Faso and current head of the G5 Sahel initiative.

He was speaking at a special summit organized in the picturesque town of Pau, in southern France, 85 kilometers (50 miles) from the Spanish border, next to the snowy Pyrenees.

The G5 Sahel countries — Mali, Burkina Faso, Niger, Chad and Mauritania — had been invited by French President Emmanuel Macron to announce new measures to reinforce their fight against terrorism in the region.

The security situation seems to be getting more dire by the day as the number of attacks rises. Between January and November last year, more than 1,500 civilians were killed and 1 million people were displaced — twice as many as the year before, according to the UN. The latest attack in the city of Chinegodar in western Niger on January 9 cost the lives of 89 soldiers. Seventy-seven terrorists were also killed.

France and the G5 Sahel countries thus announced that a common command structure would be established to coordinate between the 4,500-strong French force Barkhane, present in the region since 2014, and the joint 5,000-strong G5 Sahel army. France will boost the number of French soldiers by 220 troops. A new task force, called Takuba, will be created to bring in special forces from other European countries — on top of those already providing logistical support, such as the UK, Denmark and Germany.

General Dominique Trinquand, a military consultant and the former head of the French military mission to the UN, called the measures good news. "We need to coordinate better between the different forces in the region — especially as the security situation is deteriorating so drastically. Although I'm still waiting to see how this common structure will really work," he told DW.

Trinquand believes the Sahel region should be one of the main the focuses in the fight against terrorism — not only for France. "There is a real danger that terrorists could establish a new Islamic state, a caliphate — the Sahel could become the new Syria," he said, adding that Islamist fighters could then be sent from there to Europe to commit terrorist attacks.

The summit's joint statement also reconfirmed the Sahel states' "wish to pursue the military engagement with France in the Sahel region and the will to boost the presence of international troops by their side" — something Macron had insisted on as he had asked the heads of state to put an end to the "ambiguity regarding anti-French resentment."

Seven years after France first sent troops to Mali to fight Islamists, the backlash against the presence of the foreign troops seems to be growing. The number of anti-French demonstrations has increased in the Sahel region, particularly in Mali. With the rising number of casualties, people increasingly feel the military operation is futile. 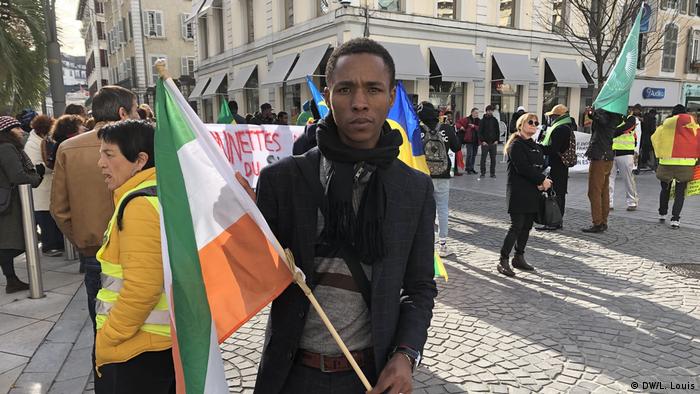 Among the protesters: Abdoulaye Adouwal from Niger wants French forces to leave

'It's our job to take care of our own countries'

A small gathering of about 50 young Africans just 600 meters away from the castle on the day of the summit illustrated that pushback.

"African puppets in the service of the French system — listen to your own people or clear off," one banner read. "It's our job to take care of our own countries," a man yelled into a microphone as protesters clapped.

Like most of the demonstrators, Abdoulaye Adouwal had traveled from the French capital, Paris, to Pau. The 24-year-old from Niger is training as a nurse and told DW he wanted the French force to leave.

"Our heads of state have brought in foreign armies who they said would secure our countries," he claimed. "But they arrived and the attacks just keep happening. It would be better if they just trained our own youth to become soldiers so that we could secure our own countries."

William Assanvo, a senior researcher at the Institute for Security Studies in Ivory Coast, understands that frustration. However, he believes that without the French presence, the situation would be even worse. "The G5 countries can't do without France — they need the military support," he argued.

And yet, the Assanvo was somewhat skeptical over the outcome of the summit. "These measures are nothing new under the sun and don't tackle the underlying reasons for the rise in terrorism — especially poor governance," he said. "Many young people join local terrorist groups because there is either no police force in their region or the police force goes rogue. Joining a local militia is the only way to keep safe. If we really want to root out terrorism in the region, we need to improve these countries' police, justice and governance system."

General Trinquand added to that another underlying issue that needed to be addressed: economics. "The number of people living in these countries has skyrocketed — in Burkina Faso, it has quadrupled to 20 million people within a few decades," he said. "But there are almost no jobs for young people other than joining the militia, which pays rather well."

Both Barkhane and G5 do include some economic development programs. France has also pledged to up to €7 billion ($7.8 billion) per year for development aid in 2022, with most of it going to African countries. The summit's joint statement also mentions a commitment to re-establish the rule of law. But so far, few concrete results have materialized.

A question mark over the French presence

Without a more thorough rethink of the strategy against terrorism in the region, the question mark over the French troop presence could thus continue to grow.

Dominique Moisi, founding member of the French Institute for International Relations and special advisor for geopolitics, argues that question mark has already reached France itself. "The shadow of a doubt has emerged amongst the French elite about the sense of purpose of the operation in the Sahel region, given its lack of effectiveness," he told DW. "More and more people are wondering if France shouldn't rethink its priorities and rather concentrate on more urgent challenges, such as a stronger Asia, Iran and Turkey."