US to redirect Central America aid to Venezuela's Juan Guaido

In a USAID memo, Donald Trump's administration said that funds would go to paying salaries of Juan Guaido's interim government, local NGO's and the promotion of independent media. 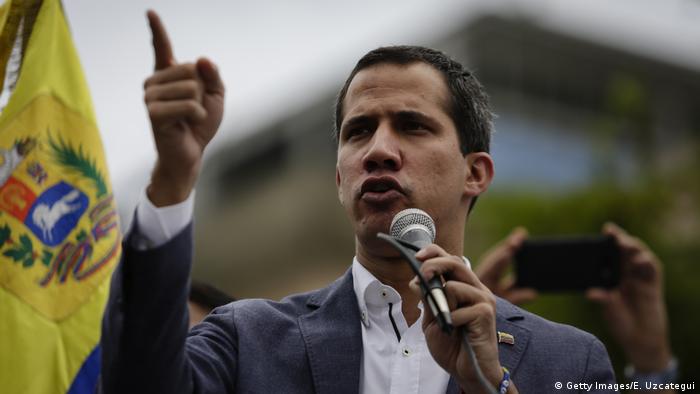 The US is planning to divert nearly $42 million (€37 million) from development funding for Guatemala and Honduras to Venezuela's opposition, according to an internal memo obtained by the Los Angeles Times and other news agencies on Wednesday.

The move comes just months after the Trump administration announced it would be ending aid to Guatemala, Honduras and El Salvador, the three countries at the center of the current migration wave to the US.

Trump blamed the three Central American nations for not doing enough to stop their citizens from migrating to the United States.

In the memo, USAID, the government's international development agency, said the "deviation” of the money was "necessary due to unforeseen events and exceptional circumstances.”

The US and more than 50 other countries have recognized Venezuela's opposition leader Juan Guaido as interim president of Venezuela and supported his cause to dislodge Nicolas Maduro from power.

Despite the pressure, the leftist president has managed to remain in power, enjoying the support of the country's armed forces.

USAID stressed in the memo that Venezuela's political crisis was "a significant, exigent event in the US national interest" that required the diverted funds.

A portion of the money would finance Guaido directly. The memo said the funds could cover the "interim government staff salaries or stipends, work-related travel and other costs necessary to ensure full deployment of a transparent financial management system and other activities necessary for a democratic transition."

Some $2 million will go to support diplomatic efforts by Guaido's supporters as they negotiate with the Maduro regime, and $7.5 million will be dispensed to support independent media with the goal of providing Venezuelans with "unbiased and unfiltered sources of news and information," the memo said.

Neither the US State Department nor Juan Guaido's interim government has commented on the USAID memo.

Nothing for Venezuelan refugees

While the Trump administration has been a strong opponent of Mauro's regime and highlighted the humanitarian crisis in the country, it also signaled on Wednesday that it would not grant protection to Venezuelans seeking refuge in the US.

In a response to a request by Democratic Senator Dick Durbin, the US Citizens and Immigration Services said it was not planning on adding Venezuela to the list of countries eligible for its Temporary Protected Status (TPS) program, which would allow citizens from that country stay in the US until the situation at home improves.

The TPS program has already been discontinued to migrants from other countries by the Trump administration.  Without TPS, some 250,000 Venezuelans who are currently in the US would face deportation.

"President Trump cannot do both. He cannot warn Americans that Venezuela is such a dangerous place that they should not travel there, and then tell the Venezuelans in the United States that they are forced to return," Senators Dick Durbin and Bob Menendez said in a written statement.

There will be further talks to end to Venezuela's stalemate, negotiators have said. For years, the president's adversaries have been wary of lengthy dialogue, insisting that he has used talks to stall for time. (12.07.2019)

A UN report has detailed the extrajudicial executions of thousands of young men by special forces. The report says that the death squads are carrying out President Maduro's strategy for neutralizing political opponents. (04.07.2019)

Two members of Venezuelan opposition leader Juan Guaido's security team have been arrested for allegedly trying to sell guns. There is no indication that the arrest will affect ongoing negotiations with the government. (14.07.2019)