Two members of Venezuelan opposition leader Juan Guaido's security team have been arrested for allegedly trying to sell guns. There is no indication that the arrest will affect ongoing negotiations with the government. 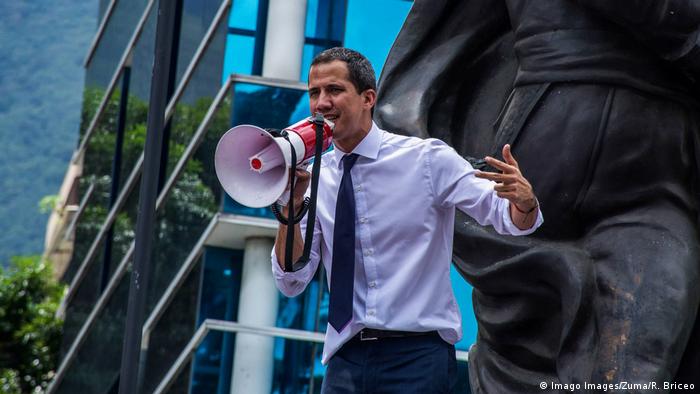 The men were detained for reportedly planning to sell four guns that are allegedly state property and were used during Guaido's failed coup in late April. Guado said that they were taken into custody while they were providing security for his family as he was travelling.

The arrest comes as the Venezuelan government, led by embattled President Nicolas Maduro, is holding talks with the opposition to end a political conflict amid an economic collapse and a humanitarian crisis.

Venezuelan Information Minister Jorge Rodriguez said in a televised statement that the alleged attempt to sell weapons while negotiating with the government was a sign of deceit from the opposition.

In a Tweet, Guaido accused the Maduro government of being behind the arrests and said that government authorities had planted weapons on the men in order to frame them.

During a speech in the western state of Trujillo on Saturday, Guaido said that the opposition was fighting against a "dictatorship."

Last week, the two sides held several days of talks and more negotiations are planned. The opposition said it hopes the discussions mediated by Norway will lead to Maduro stepping down and fresh elections.

Guaido claims that Maduro's reelection was a fraud and tried to convince the military to oust Maduro in April. He is backed by the United States and is recognized by more than 50 countries as Venezuela's interim president.

The US has sanctioned dozens of Venezuelan officials and Maduro supporters while cutting off the country's vital oil exports. Maduro's government has nevertheless clung to power thanks to the continued support of the military.

The UN estimates that more than 3 million migrantsand refugees have left Venezuela since 2016, due to the lack of access to food, health care and basic services.

wmr/amp (AP, dpa)
Every evening, DW's editors send out a selection of the day's hard news and quality feature journalism. You can sign up to receive it directly here.