A UN report has detailed the extrajudicial executions of thousands of young men by special forces. The report says that the death squads are carrying out President Maduro's strategy for neutralizing political opponents. 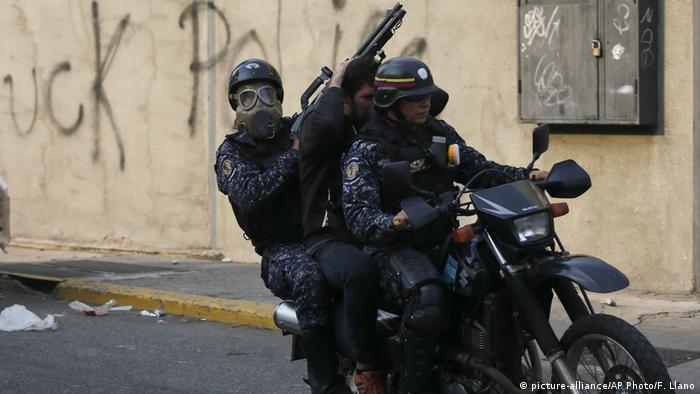 Venezuelan security forces have been sending death squads to commit extrajudicial killings of young men, according to a United Nations report released on Thursday. The crime scenes are then staged to make it look like the victims were resisting arrest.

Caracas has said that about 5,287 people died last year when they refused to be detained by officers, and that this has been the case for a further 1,569 through the middle of May this year. However, the UN report suggests that many of these deaths were actually extrajudicial executions.

The report relays the accounts of 20 families, who say that masked men dressed in black from the Special Actions Forces (FAES) arrived at their homes in black vehicles without license plates. They then broke into their houses, assaulted the women and girls and stole belongings.

"They would separate young men from other family members before shooting them," the report said.

"In every case, witnesses reported how FAES manipulated the crime scene and evidence. They would plant arms and drugs and fire their weapons against the walls or in the air to suggest a confrontation and to show the victim had 'resisted authority.'"

According to the report, the deaths were an integral part of President Nicolas Maduro's campaign of "neutralizing, repressing and criminalizing political opponents and people critical of the government."

Venezuela said the report "privileges negative testimonies to the extreme, while hiding or minimizing measures adopted to advance human rights." It added that the research was "not objective or impartial."

Maduro's government went on to call the document "openly biased" for not also addressing visits to hospitals, jails, and medicine and food distribution centers by UN observers.

"There are countless inaccuracies, errors, facts taken out of context and false assertions," the government said.

Venezuela has been gripped for years by a humanitarian and political crisis, brought on by Maduro's economic policies, power grabs, and declining oil revenues. Maduro has blamed the crisis on US sanctions aimed at forcing Maduro to resign.

Expelled from Venezuela in March for greeting opposition leader and interim president Juan Guaido at the airport, German Ambassador Daniel Kriener has been given permission by Caracas to return. (02.07.2019)