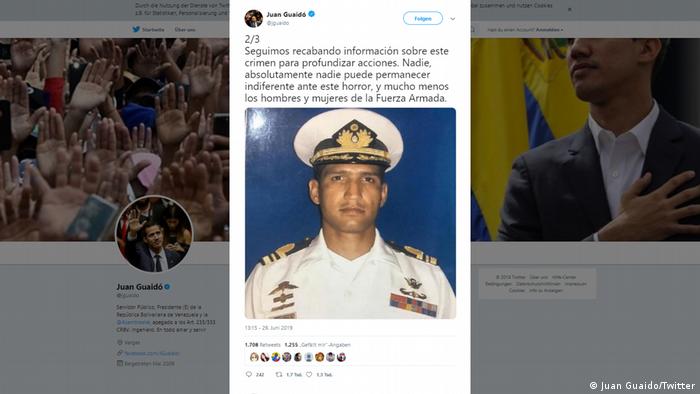 The United States and other countries in the Americas have accused Venezuelan President Nicolas Maduro of torturing and killing a dissident naval officer.

"The United States condemns the killing and torture" of Rafael Acosta Arevalo, the US State Department said. The officer "died in the custody of Maduro's thugs," spokeswoman Morgan Ortagus said.

Acosta, who was arrested on terrorism charges on June 21, reportedly died in hospital on Saturday. Shortly before his death, he appeared in court with visible signs of torture.

The Lima Group, which includes 11 Latin American countries and Canada, called on the United Nations to investigate what they called his "assassination." The bloc also criticized Venezuela's history of arbitrary arrests and torture under President Nicolas Maduro.

The leader of the Venezuelan opposition and self-declared interim president, Juan Guaido, said the officer had been "brutally tortured" in what he described as an "abominable crime."

The European Union also called for an independent probe. "His death cannot go unnoticed nor unpunished," it said.

Venezuela has been in a severe political and economic crisis for years. Millions of fled the country to escape shortages of food and medicines.

The United States, Lima Group and several countries in the European Union, including Germany, recognized Juan Guaido as Venezuela's rightful leader after he declared himself interim president in January. Since then, Guaido has tried to convince the army to turn against Maduro.