The US Treasury Department has passed sanctions on Nicolas Ernesto Maduro Guerra for serving his father's "illegitimate regime." The US said it would continue to target members of Maduro's inner circle with sanctions. 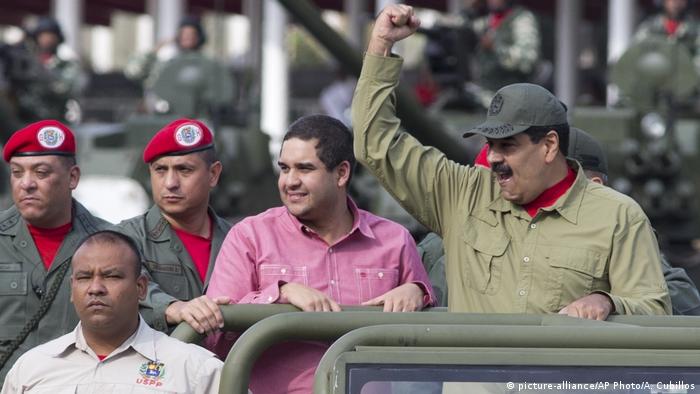 The US imposed sanctions on the son of embattled Venezuelan President Nicolas Maduro, the Treasury Department said Friday. The sanctions freeze any assets in the United States owned by 29-year-old Nicolas Ernesto Maduro Guerra.

The US has been leading efforts to oust Maduro since his re-election in 2018, which Washington considers illegitimate. It is the latest move from the US to increase pressure on family members of top officials supporting the socialist leader.

He added that Maduro "relies on his son and others close to his authoritarian regime to maintain a stranglehold on the economy and suppress the people of Venezuela."

The US accused Maduro's son of being involved in propaganda and censorship, profiting from Venezuelan mines and helping pressure the military to keep humanitarian aid out of the country.

"Maduro's regime was built on fraudulent elections, and his inner circle lives in luxury off the proceeds of corruption while the Venezuelan people suffer,” said Mnuchin.

The US supports Venezuelan opposition leader Juan Guaido, who has failed to oust Maduro despite declaring himself Venezuela's rightful president.

Maduro's ensuing hold on power has bankrupted the country and caused one of the worst refugee crises to ever hit Latin America, as Venezuelan's flee to country due to lack of food and basic services.

In targeting Maduro's son, the Treasury Department said he was part of the Constituent Assembly, a body the US said Maduro had set up to consolidate his power by "rewriting the Venezuelan constitution and dissolving institutions."

It added that the Constituent Assembly, which rivals the opposition-controlled National Assembly, was "created through an undemocratic process instigated by Maduro's government to subvert the will of the Venezuelan people."

Guaido is the leader of the National Assembly. He is recognized by the US and more than 50 other countries as Venezuela's acting president.

The US has already sanctioned more than 100 top Venezuelan government officials and other Maduro insiders accused of corruption, human rights violations and drug trafficking.

Europeans turn back clocks for daylight saving, perhaps for last time 31m ago

Lee Kun-Hee, the force behind Samsung's rise, dies at 78 2h ago

Who is Maryam Nawaz, the face of Pakistan's anti-government movement? 5h ago