Both US President Joe Biden and Mexican President Lopez Obrador have stressed the need to maintain good relations, but admitted the countries haven't always been "perfect neighbors." 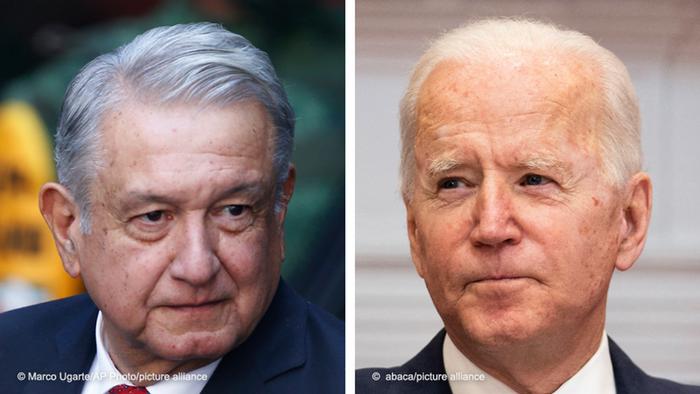 US President Joe Biden and Mexican President Lopez Obrador discussed COVID vaccines, immigration, and the US-Mexico relationship during a call on Monday.

Both Biden and Obrador said it was important to maintain good relations with one another.

"This is what I know, the United States and Mexico are stronger when we stand together," said Biden at the beginning of the call.

Biden on migration to the US

Coming into the meeting, the US was reporting a new surge of undocumented migrants attempting to cross the US-Mexico border. Biden said he wants to take a softer approach to immigration compared to former President Donald Trump, who demanded Mexico pay for a wall across the more than 3,000 km (1,860 mile) border.

"We haven’t been perfect neighbors to each other," said Biden during the call.

Obrador said he was thankful that Biden was "willing to maintain good relations for the good of our people in North America."

Undocumented immigrants in the US

US: Immigrants hope for a better future

Obrador had agreed with Trump to stop the flow of migrants attempting to cross into the US. Despite several other disagreements, Trump called his Mexican counterpart a "friend" and "great president" during one of his final presidential speeches.

Biden has supported a bill to give legal status and a path to citizenship for an estimated 11 million people illegally living in the US. He also supported efforts to allow hundreds of thousands of people who illegally entered the US as children to stay in the country.

No update on COVID-19 vaccines

Obrador was expected to ask the US to share some of its COVID-19 vaccines with his country.

"We want to have an answer about a request we made," said Obrador hours before speaking with Biden, who confirmed that they would discuss the issue at the beginning of the meeting.

But an official statement following the meeting's conclusion did not mention vaccine distribution.

Prior to the meeting, White House press secretary Jen Psaki said the US administration's focus "is on ensuring that every American is vaccinated. And once we accomplish that objective, we're happy to discuss further steps."

In the statement that followed Monday's meeting, both the US and Mexico agreed to work on economic developments in impoverished areas in southern Mexico and Central America, where most of the migrants entering the US come from.

Both Biden and Obrador also agreed to work together on climate change and boost economic cooperation, according to the statement.