At US border, locals push back against Donald Trump′s wall | Americas | North and South American news impacting on Europe | DW | 22.02.2020 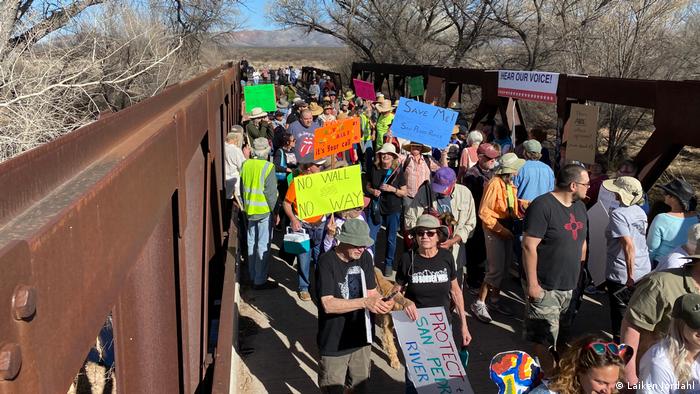 It's midday in Organ Pipe Cactus National Monument. As the sun beats down, saguaro cacti throw little shade over this part of the Sonoran Desert, where summer temperatures regularly top 37 degrees Celsius (99 degrees Fahrenheit). Today though a very narrow segment of the park is getting a little more shade. It's accompanied by the incessant whine of construction vehicles.

President Donald Trump's major campaign promise is taking shape — a rusty, nine-meter tall mix of concrete and steel. As of January 31, 185 kilometers (115 miles) of new wall had been built, according to the US Customs and Border Protection Agency. Depending on terrain, the new barrier costs about $12.5 million per kilometer. It's growing longer by the hour as contractors use mobile cranes to lift the bollards into place.

For Kevin Dahl of the National Parks Conservation Association, the wall is upsetting. He's been coming here since the 1970s. At Quitobaquito Springs, a small wetland meters from the border, the siren of a steamroller preparing earth keeps interrupting him.

"This is a desert oasis where people have lived for millennia and it's protected by the park service. They're destroying an archaeological site. There are people buried here," he says.

Dahl fears the damage to the area's unique desert ecology is irreversible.

"Desert animals have to roam far to get water. The flow of genes, the interaction between the animals, which is really important for maintaining a healthy population, will be completely stopped by this wall," says Dahl. 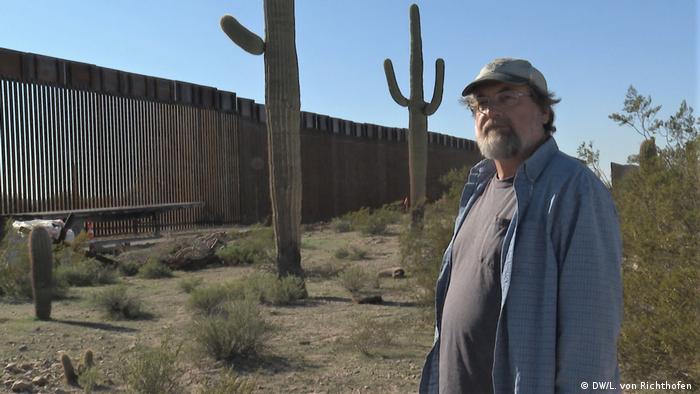 "Drug cartels know how to go under, through and on top of walls. They've done it forever."

Protests on the rise

Arizona, a historically conservative state, voted for Trump in the 2016 general election. But construction of the new border wall has been met with rising opposition. At a demonstration in Cochise County, over a thousand gather at the San Pedro River bridge, which crosses the last free flowing river in the American Southwest. Demonstrators are concerned border-wall contractors will build a solid barrier across the river, effectively cutting it off.

"The border patrol and Department of Homeland Security have not reached out to any citizens or local governments to tell them what is going on," says protester and local resident Tricia Gerodette.

"In Texas there is a huge fight about private land on the border, and the government is attempting to take that land," she adds. 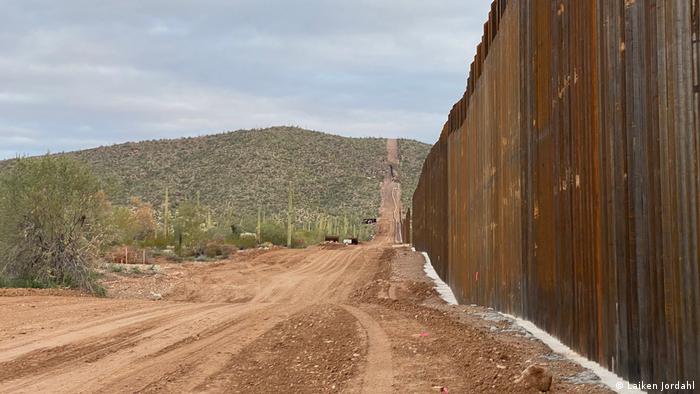 A newly completed section of the border wall

Laiken Jordahl of the Center for Biological Diversity, an environmental protection group based in Tucson, believes the Trump administration is pulling out all the stops to get the wall done.

"They have waived more than 41 environmental and cultural resource protection laws to build this wall," he said.

Jordahl has been closely documenting the wall's progress in Arizona for months. Part of the problem, he says, is that the wall's construction is inappropriate for the terrain.

"It's actually pretty easy to climb over those things. I've done it myself!" Jordahl says.

After the protesters have left the road, a red pickup truck pulls up. The driver leans out the window and yells "God bless Donald Trump. God bless America. God bless legal immigration!" before speeding off.

Not everyone is against the wall. The Trump administration has said the wall will stop migrants and drug smugglers using remote areas to enter the United States illegally. 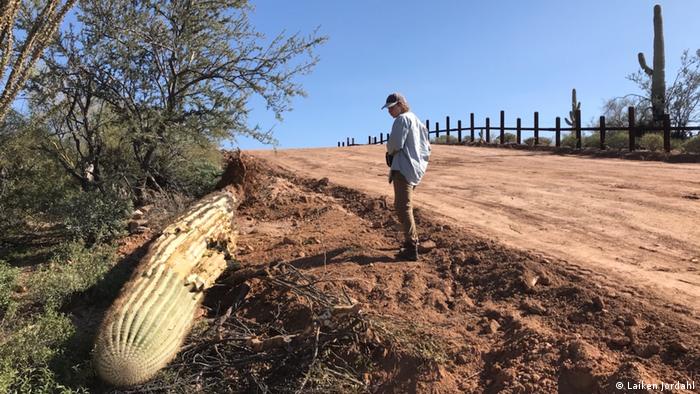 A saguaro cactus felled to make way for the border wall

Another local man, wearing a "Make America Great Again" baseball cap as he walks his dogs, says that recently a migrant woman died of exhaustion under the bridge across the San Pedro after crossing the border from Mexico.

"There used to be a little memorial there," he says.

"I'm glad they are building wall," he adds, reasoning that it will at least stop migrants crossing and dying in the desert on the US side.

To avoid being caught by the border patrol, migrants try to cross the US-Mexico border through the remote areas of Organ Pipe Cactus National Park and the neighboring Tohono O'odham Reservation. Once in the US, the Ajo corridor stretches before them. The area is so remote, dry and hazardous that even experienced hikers cannot make the trek that many migrants attempt. It has a reputation for being the most deadly migrant route in the American Southwest. Conservative estimates of the death toll reach 100 people per year in this area alone, but that does not stop migrants from trying. 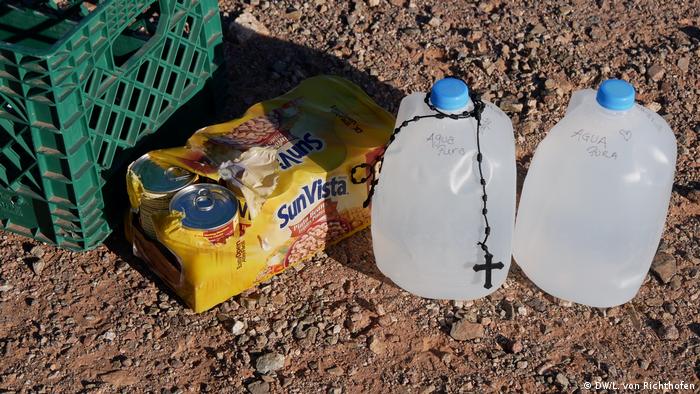 A typical food drop: cans of nutritious beans, a few gallons of water and a rosary

"Recently one of our search-and-rescue groups found a Guatemalan man with a broken leg. Even so, he said his situation was better than what he faced back home," explains Maria Singleton, who volunteers for the Ajo Samaritans. The humanitarian group drops water and essential supplies in the desert along known migrant trails, so that migrants do not succumb to thirst, starvation or heat exhaustion. As wall construction grinds on, it pushes migrants to take even greater risks.

"I don't think the border wall is going to have an effect on stopping people from trying to cross. It'll just make it even more dangerous," Singleton says.

"They're going to get here"

Driving out of Organ Pipe, Dahl points through the window of his pickup truck. In the shade of the wall, border patrol officers stand guard next to four people they have detained. They look like a family.

"People who want to work, they're going to get here. And if it's not through this desert, it's going to be through the ports of entry," Dahl says.

The dust kicked up by construction hangs in the air. Heavy earth-moving vehicles whine through the saguaro groves. And panel by panel, the new border wall grows longer, with no end in sight.

For many Hondurans, the dream of a better life outweighs the danger of journeying north to the US. They flee poverty, desperation and corruption, and keep their families afloat by sending money from their new homes. (28.06.2019)

As Cuban authorities work to restore power to the country's population of 11 million, Hurricane Ian has now strengthened into an 'extremely dangerous' Category 4 storm.