Plains Indians and conservationists are reintroducing the iconic American buffalo to public lands and reservations, a century after the creature's decline. 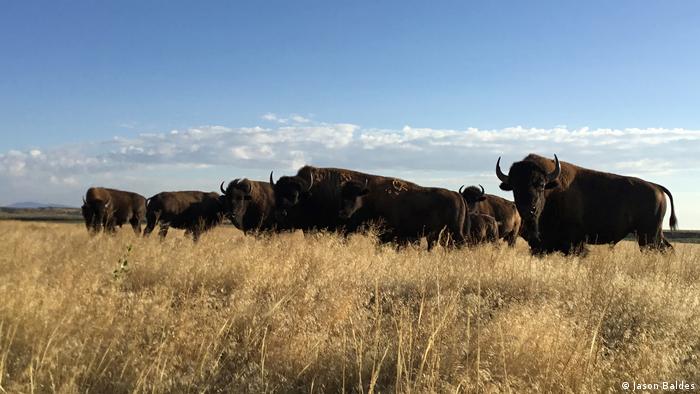 The American bison is a mighty creature to behold. Covered in thick dark brown fur, the massive bovines can grow to be more than two meters tall and weigh over a ton. At one time, more than 60 million of them thundered across the grasslands of North America from Arctic Alaska all the way south to the Gulf of Mexico.

It is hardly surprising the animals — also commonly known as buffalo — were an essential part of these ecosystems and vital to the survival of many Native American peoples that lived alongside them.

All that changed during the 1800s when European settlers systematically hunted and slaughtered the massive herds, almost annihilating the species. By 1889, only 541 bison were left.

"We virtually wiped out the bison and much of it had to do with westward expansion and with atrocities committed against Native Americans," said Chamois Andersen, a spokesperson for the conservation organization Defenders of Wildlife.

Now the descendants of those Native Americans are helping bring back these symbols of the American West by giving them a new home on the reservations of America's Plains Indians.

Read more: Rewilding — UK's most talented architects are not human

One of those descendants is Jason Baldes from the Eastern Shoshone tribe. He's also the executive director of the Wind River Advocacy Center in Fort Washakie, Wyoming. His ancestors' lives were closely linked to the large mammals.

"Rather than shop at the mall, the buffalo was our Walmart," Baldes said — referring to the giant US retail chain.

Romania: Return of the European bison

Plains Indians — Native Americans who lived on the grassland plains stretching along the middle and western parts of Canada and the United States — relied on every part of the animal for survival — from food, to clothing and shelter.

Baldes thinks the loss of the bison herds was almost as devastating to his people as the forced relocation onto reservations by the US government, largely in the 19th century.

"Their return is a blessing," he said.

Since the late 19th century, the bison population in the US has slowly recovered to about 500,000 — most of them raised as livestock for food.  Today, the animals mostly live in national parks and a reserves. They have few other places to go.

By returning them to Native American lands, they have the chance to expand their habitat once more. For Baldes, these efforts aren't just about wildlife conservation. They also offer an opportunity to reconnect to a way of life that was extinguished over a century ago.

Baldes is in charge of the bison recovery efforts on the Wind River Reservation. He looks after a small herd of wild bison on 300 acres (121 hectares) of pasture in the heart of the 2.4 million acre reservation.

He started back in 2016 with 10 bison. That number has grown to 28 animals. The ultimate goal is to provide a sustainable habitat for a much larger herd on 400,000 acres of suitable land, allowing the bison to be managed as a wild species, rather than as captive livestock. 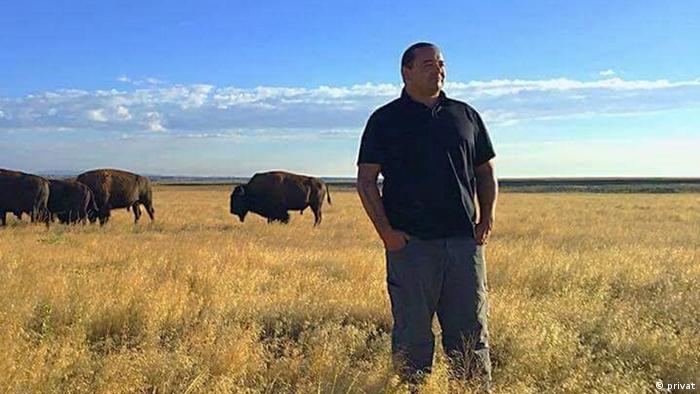 Bison versus the US

Baldes's small herd is descended from wild, genetically pure buffalo rescued from near-extinction in Yellowstone National Park. At present, around 3000 bison live there.

As of 2019, about 20,000 buffalo live on one million acres of public and tribal land in the US, where they are kept for ceremonial, food, and conservation purposes.  It's been the culmination of a long struggle, according to Baldes.

"There are powerful ranching interests in Montana, Idaho and Wyoming opposed to buffalo recovery efforts," he said.

That's partly because there is a risk that roaming buffalo could carry brucellosis. Bison initially contracted the infectious disease after coming into contact with non-native domestic cattle. While it has largely been eradicated among livestock, it persists among some wild bison. The disease seems to have only a marginal impact on the wild animals, but can be devastating to cattle populations.

Part of the Yellowstone herd is culled each year to prevent overgrazing and keep the population stable, so animals don't stray from the park.

In the past, wildlife advocates have sued government agencies to prevent the slaughter of Yellowstone's buffalo. And if animals do wander out of the park, they've insisted they be relocated to buffalo reserves after they've been quarantined and deemed healthy. 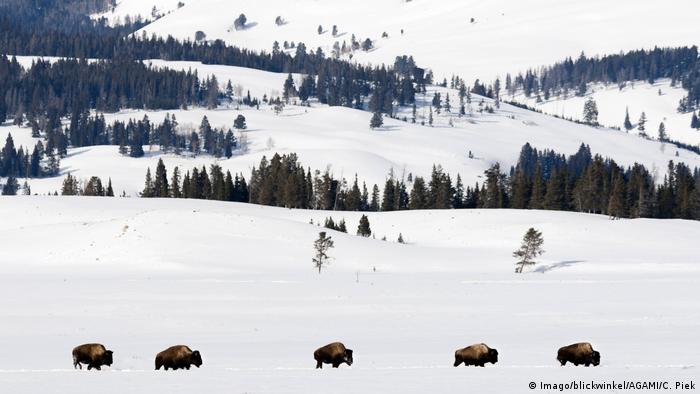 American bison once thundered across the grasslands from Alaska to Texas. Only small populations like this one in Yellowstone are left today

These legal steps led to the successful transfer of Yellowstone's buffalo to the Fort Belknap and Fort Peck Reservations in Montana. In 2018, the park's officials also announced the creation of a new program to capture and quarantine excess buffalo with the aim of establishing disease-free herds across the nation. These herds could help restore a disappearing habitat.

Roughly 170 million acres of tall grasslands existed on the US Great Plains during the 1800s. Around four percent remains intact.

"It's really a threatened environment," said Andersen from Defenders of Wildlife. Conservationists hope to return the bison to at least part of that land.

For them, the symbolism and the significance of buffalo conservation is important, because their presence not only stirs the imagination of a distant past, but also quite literally shapes the landscape.

The grass-munching, mud-wallowing beasts also create habitats for other native species like prairie dogs to thrive. Their shaggy fur coats disperse the seeds of native plants and their plentiful urine and feces fertilize the grasslands.

If all goes to plan, conservationists hope the bison can resume their role as regulators of the prairie.

The Carpathian buffalo was once a popular livestock breed in the Ukraine. But it's fallen out of favor and its numbers have dwindled. Why is one German agronomist trying to bring it back into vogue? (06.02.2017)

Plans by Poland's government to allow the hunting of a limited number of wild bison, which proponents say are threatened by illness, have caused outrage among environmentalists. (09.01.2017)