US Green Party: 'There's more at stake than getting rid of Trump'

With left-leaning voters fearing a second Trump term, the US Green Party is facing calls from Democrats to drop out of the race. The party's presidential nominee, Howie Hawkins, tells DW he won't do it. 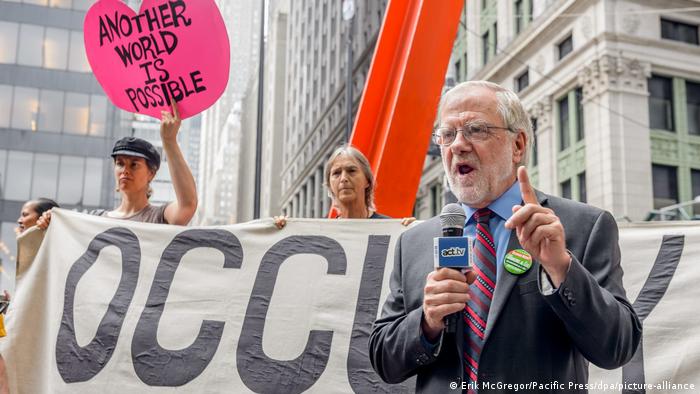 Howie Hawkins knows he will not be the next president of the United States. But he is running anyway as the nominee of the US Green Party for a simple reason: He believes neither major political party has real solutions to what ails the country and the planet.

"When we go to fight on climate issues or affordable housing issues or for universal health care," Hawkins told DW, "we're fighting the Democrats as much as the Republicans."

Few national polls include third parties on their surveys, but those that do are showing around 1% support for Hawkins. The other third party with notable support, the Libertarian Party, is polling at around 4%.

Read more: A polarized US portrayed in 'Divided We Stand'

"It's a very difficult year for third parties," said Lee Drutman, author of the book Breaking the Two-Party Doom Loop: The Case for Multiparty Democracy in America. "It's seen as such an incredibly high-stakes election where both Biden supporters and Trump supporters feel incredibly passionate."

The Democratic Party has fought to keep the Green Party off the ballot in several states, and was successful in Pennsylvania and Wisconsin. DW contacted the Democratic National Committee for comment, but did not receive a response.

In the past, the Green Party has received enthusiastic endorsements from prominent left-wing activists and celebrities including actress Susan Sarandon, filmmaker Michael Moore and musicians Eddie Vedder and Patti Smith.

But this year, the party reports a lack of big-name backing. "I have lots of prominent progressives and environmentalists calling me personally to plead with me to say 'Vote for Biden' in the close states," said Hawkins. "But I'm the nominee of the Green Party."

Read more: Trump and Biden: Little room for climate change in US election

Many on the US left consider the Green Party to be a "spoiler" in the election — a party that could attract left-wing voters away from Democratic presidential nominee Joe Biden, ultimately handing a second term to Donald Trump.

"I understand that," said Hawkins. "But there's a lot more at stake than just getting rid of Trump." 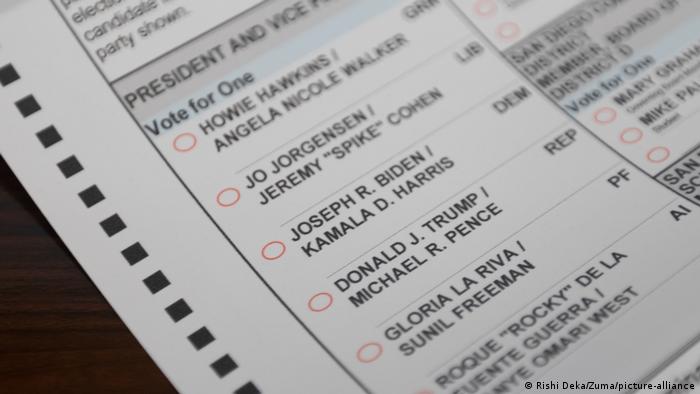 Howie Hawkins is on the ballot in many states, but has been overshadowed by Donald Trump and Joe Biden

Despite the virtual impossibility of a victory, Hawkins believes his campaign could force Biden to the left for fear of losing votes to the Green Party.

"The historic role of third parties in the United States is to bring issues to the fore that are not being addressed," said Hawkins. "It's an old tradition going back to the Liberty Party, which put the question of slavery into the elections back in the 1840s."

One issue that Hawkins hopes to press the Democrats on is urgent climate action. "Trump calls climate change a hoax," he said. "But the Biden climate plan acts as if it's a hoax."

Hawkins is considered by many to be the first US politician to include a Green New Deal in his platform when he ran for governor of New York in 2010. That piece of legislation, which would create a federally funded jobs program to wean the country off fossil fuels, is now championed by the left wing of the Democratic Party.

"The things we're proposing are popular with the American people," said Hawkins. He pointed to government-funded universal health care and the Green New Deal, two policy proposals supported by a majority of Americans. "So it's just a problem in our electoral system."

Tied down by a two-party system

Hawkins blames that not on voters or his party, but on the US electoral system. "It's a winner-take-all, two-party system," he said. "It's in the political culture."

Nothing in the US Constitution prescribes a limit on the number of political parties. But because candidates must only receive a plurality of votes — more than any other candidate in the race — this deters candidates from competing with each other if their platforms are similar.

Drutman argues that the system is outdated. "The US is a very old democracy, and in 1787, there weren't a lot of voting systems around," Drutman told DW. "A lot of the modern systems of proportional representation were invented in the mid to late 19th century, even in the early 20th century, and a lot of countries adopted them. But in the US, things kind of just stayed the same."

Hawkins believes the US won't become a multiparty democracy until the electoral system is reformed. The Green Party has advocated for proportional representation in the US Congress, much like the German parliamentary model. It has also called for ranked-choice voting for single-seat elections.

In the meantime, the Green Party is focusing on running candidates in cities, counties and states where they actually do have a chance to win. He points out that the Republicans used this strategy to create their party in the 1850s.

"They built it from the bottom up," said Hawkins. "And that's what we've got to do."