One person, one vote: It's the law of the land in the United States. But voting advocacy groups argue that isn't the case for minorities — and say Georgia is a case in point this election cycle. 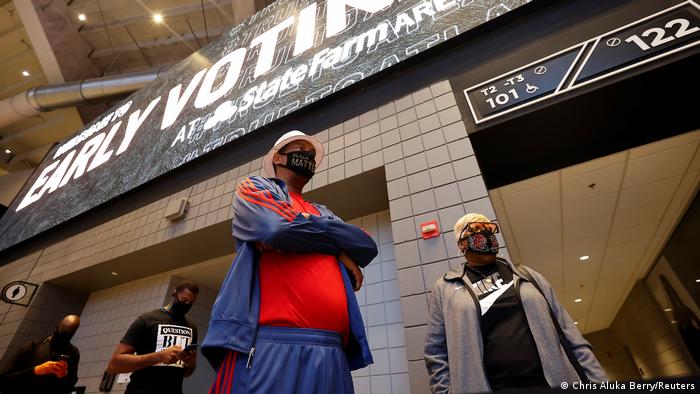 The images have beamed around the world: As a record number of Americans vote early in this year's presidential election, tens of thousands of people in states like Virginia, Texas and Georgia have been braving long lines and waiting several hours to cast their ballots. The images have sparked bewilderment and hand-wringing from Europe to Asia.

For many voters, however, the waits were to be expected. In a deeply polarized nation, the significance of casting a ballot in this year's election appears to be one of the few things Americans can agree upon.

On a humid afternoon last week in a suburb just north of Atlanta, an African American woman waited patiently in a portable chair outfitted with an overhead panel to ward off the midday sun. She had been waiting five hours. "It is a very, very important election," she told DW. "So many things are going on in the world and I think a lot of people are willing to make their voices heard."

Yet there is a bitter battle being waged over whose voice gets to be heard, and Georgia has become a central arena. Over the last decade, Democrats and voting advocate groups have clashed with Republican officials over what a free and fair election looks like.

Voting rights organizations like Fair Fight and Common Cause say the dramatically long lines in the state's early voting are an example of voter suppression: erecting barriers to vote that affect certain groups of the population. 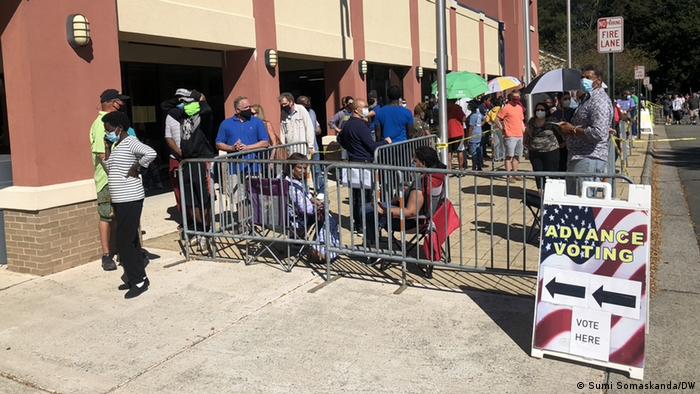 A report by Stanford political scientist Jonathan Rodden, using data compiled by Georgia Public Broadcasting and investigative journalism group ProPublica, revealed that in polling places where more than 90% of active registered voters were minorities, the average minimum waiting time was 51 minutes; in districts where more than 90% of registered voters were white, the average fell to six minutes.

"Georgia keeps doubling down on trying to stop Black people from voting as well as stopping Hispanics and Asian Americans," Carol Anderson, professor of African American Studies at Emory University and author of One Person, No Vote: How Voter Suppression is Destroying Our Democracy, told DW, pointing out that all three groups overwhelmingly vote Democrat. 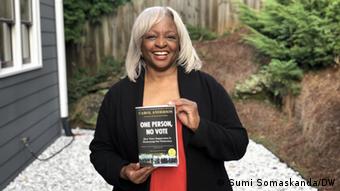 "It's a legacy of knowing that this system in place is not designed to honor and embrace your right to vote, but is systematically working through different ways to stop it," she said.

For Republicans, however, the long waits are the result of pandemic measures like physical distancing, and poor planning.

"This idea that there's voter suppression going on today is just a myth — a narrative myth created by certain folks to explain why they lose elections," Hans von Spakovsky, a senior legal fellow at the conservative Heritage Foundation and Republican lawyer, told DW. "There are long lines because people are making the mistake of voting early rather than voting on election day when there are many more polling places open."

Still, in recent years, 10% of polling locations have been closed across Georgia, according to ProPublica. And in a state with a long history of racial discrimination, such steps have raised concerns. 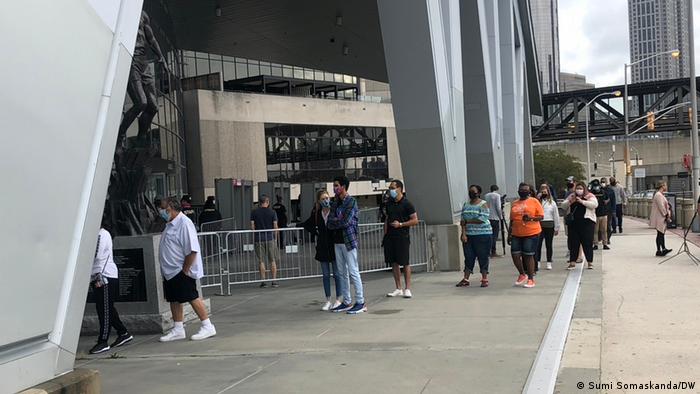 In the late 19th century and the first half of the 20th, African Americans across the South were subjected to Jim Crow laws,  which enforced racial segregation. African Americans were physically blocked from voting through violence and intimidation, and legally thwarted with poll taxes and impossible literacy tests, where they were required to recite passages of the Constitution or guess how many bubbles are in a bar of soap.

The Voting Rights Act of 1965 upended those practices and required states with a history of racial discrimination to get the federal government's approval before introducing any changes to election laws.

In 2013, the Supreme Court overturned that provision of the legislation, paving the way for states to act independently.

The Brennan Center for Justice, a nonprofit public policy institute,shows that several states have moved to tighten voter identification requirements, purge inactive voters from rolls and consolidate polling stations. Ostensibly, these measures are meant to ensure that nobody votes illegally.

According to Anderson, however, these new measures unfairly target Black and immigrant communities: Purges have ended up erasing legitimate voters from voter rolls; fewer polling places have made it harder for poorer Americans to get to a voting precinct; and stricter voter ID requirements are a barrier for the millions of Americans who don't have government-issued identification.

"That's part of the subtle nasty genius of voter ID requirements, is that it looks reasonable," she said. "But it's not reasonable and it's built on a foundation of lies. The lie is massive rampant voter fraud." 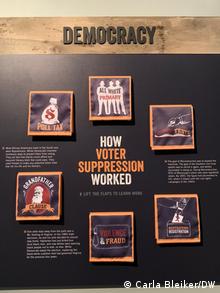 The Atlanta History Center showcases an exhibit on voter suppression

Voter fraud — the practice of ineligible voters casting a ballot, or voting more than once — has indeed become a rallying cry for many Republicans. President Donald Trump has repeatedly claimed, without proof, that universal mail-in voting creates widespread fraud.

In September, Georgia's secretary of state announced the state had identified 1,000 cases of people casting their ballots twice in the presidential primary in June.

By its own count, the Heritage Foundation lists only around 1,300 proven cases of fraud out of more than a billion votes cast over the last few decades. And a recent investigation by US public broadcaster PBS and Columbia Journalism Investigations revealed that many of those cases weren't actually fraud.

Hans von Spakovsky, who has been a leading conservative voice in putting voter fraud on the agenda for the Republican Party, insists these are just the tip of the iceberg, pointing to a different study from the Public Interest Legal Foundation indicating there were 140,000 cases of voter fraud in 2016 and 2018.

"There are many cases of fraud that election officials should be investigating but aren't doing anything about," he said.

Federal election officials continue to reject claims of systemic fraud in US elections. And the skyrocketing turnout so far this year underscores the importance of encouraging more Americans to cast their ballots in the little time left.

"There are problems with telling voters that their experience is going to be difficult. That they might be intimidated at the polls that voter fraud is widespread. All of those things aren't true," David Becker, executive director of the nonpartisan Center for Election Innovation and Research, told DW.

"It's really important for American voters and those who are viewing from abroad to understand that it's very likely that if they go vote they're going to find it's an easy process."

A previous version of this article incorrectly stated the name of the executive director of the Center for Election Innovation and Research. This has now been corrected. DW apologizes for the error.

This article was updated on October 22 to provide additional information about a recent investigation by PBS and Columbia Journalism Investigations.

US election: What happens if there is no winner on election night?

With increased mail-in voting and deep political division, the US election results could take longer than usual to confirm. DW explains the scenarios that could follow election day.