′They don′t want us here′: Native Americans struggle to vote in US election | Americas | North and South American news impacting on Europe | DW | 27.09.2020

'They don't want us here': Native Americans struggle to vote in US election

Many members of the Oglala Lakota tribe on South Dakota's Pine Ridge reservation live in abject poverty. The system is stacked against them — even when it comes to basic rights like voting in the presidential election. 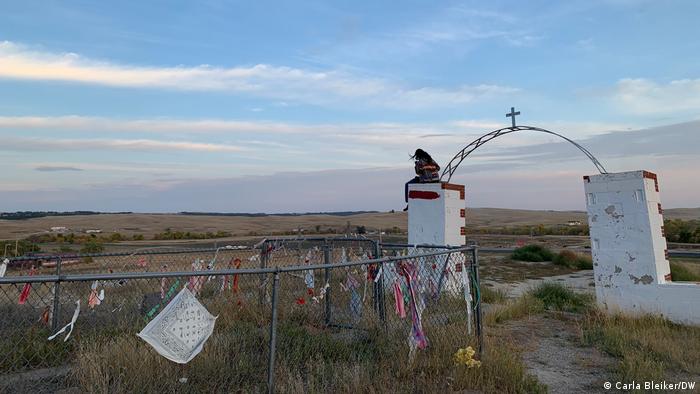 When you drive down one of the dirt roads on the Pine Ridge reservation in South Dakota, then stop the car and get out, all you hear is: Silence. Maybe there's a bird chirping, or the wind blowing through the golden prairie grass. The scene is so serene, it feels almost otherworldly.

But the reservation of the Oglala Lakota tribe has very real problems. The unemployment rate among the almost 20,000 people living on Pine Ridge ranges from 85 to 97 percent, depending on the statistics. Oglala Lakota County, which encompasses most of the reservation, is the poorest in the US based on per-capita income — around 90 percent of residents here live below the poverty line. And voter turnout has always been low.

According to the National Congress of American Indians, the voter rate among Native Americans is five to 14 percentage points lower than that of other racial groups in the country, and the situation doesn't seem to be improving, say activists. 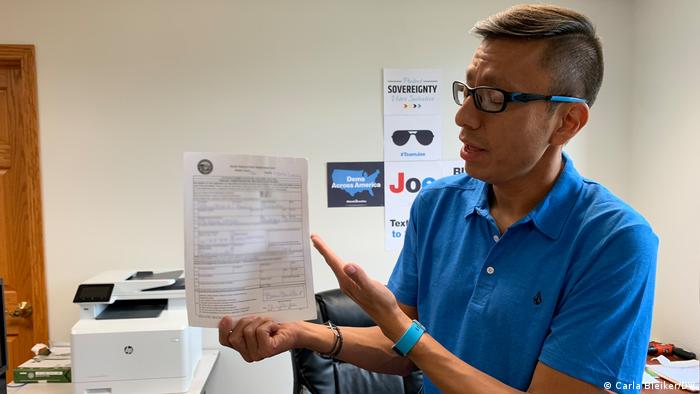 Kellen Returns from Scout, an activist from the Standing Rock Sioux tribe, says voter registration numbers have been decreasing in recent years.

"I've seen voter registration numbers [among South Dakota's Native Americans] go down since 2004," Kellen Returns From Scout, an activist from the Standing Rock Sioux tribe, says. "There's been a 60 to 70 percent decline."

In a move to reverse that trend, Returns From Scout has founded the Rapid City-based Protect Sovereignty Voter Initiative. After he wore a t-shirt with the words "Protect Sovereignty" while announcing South Dakota's delegate votes during the televised Democratic National Convention in August, calls started pouring in from people asking what that project was and how they could help. Returns From Scout and his friend and Lakota activist Cante Heart were taken by surprise — at this point, nothing but the slogan existed yet. But they were heartened by the enthusiasm and got to work. 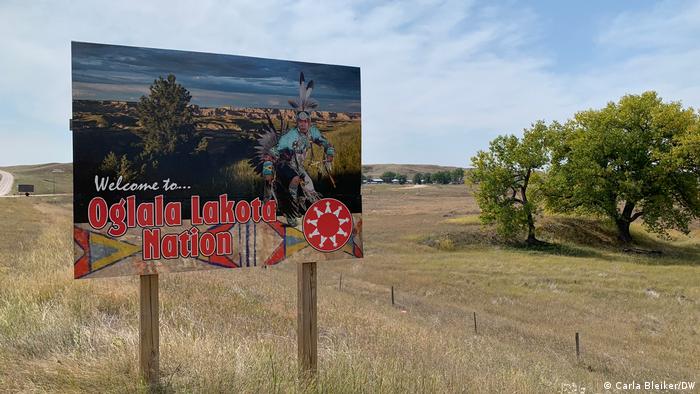 The Project Sovereignty Voter Initiative aims "to make voting a new tradition for our fellow tribal members because the best way to protect our sovereignty is to vote," Heart explains.

'You can't even be neighbors anymore'

A month later, they have amassed half an office full of supplies in Rapid City, the city closest to Pine Ridge: Printers to print registration forms, cell phones for volunteers, more hand sanitizer than a small convenience store has in stock on any given day. Returns From Scout, Heart and a few helpers have already used some of what they were given and have registered a couple of hundred voters on the reservation.

"We want to make voting a new tradition for our fellow tribal members because the best way to protect our sovereignty is to vote," Heart explains. "Being sovereign means we're able to govern ourselves, but for this, we need to vote people into office who acknowledge us and want to work with us."

That is not the Trump administration, both activists emphasize.

"We've worked so hard to build relationships [between Natives and non-Natives] and Trump has destroyed all that," Returns From Scout says in his office in front of a small collage of Biden campaign posters. "His election has divided the country to the point where you can't even be neighbors anymore."

Read more: Opinion: Donald Trump opts for a lurch to the right in the Supreme Court

One way that Heart is trying to build connections and foster respect for tribal communities under a president who is making it difficult is through performance. She regularly dances at the memorial for Native chief Crazy Horse, a popular tourist destination in South Dakota. On a hot, sunny Wednesday, she comes out onto the small outdoor stage at the Crazy Horse Welcome Center with her hair in two braids and a dress adorned with rows of metal charms. Heart is a "jingle dancer," named for the sounds her dress makes with every step she takes.

Her father plays the drum and Heart dances, first on the stage and later in a line around the small area where an all-white audience watches her, transfixed. In between dances she speaks about the Natives' struggle, how their land was stolen from them.

"I like performing and teaching people about my culture," Heart says. "It's my duty to inform people that Native Americans are still here, that we're fighting for our rights." 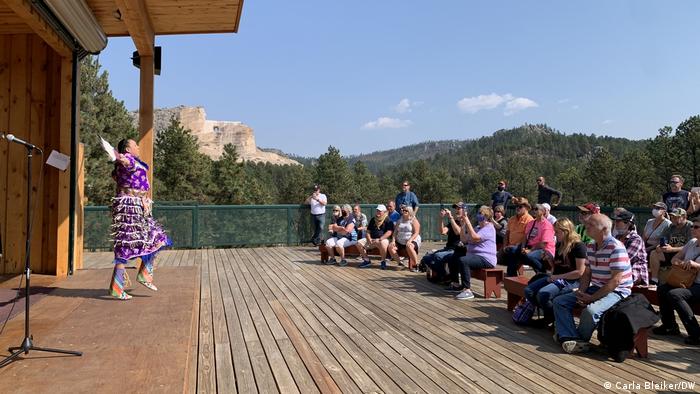 Heart is trying to build connections and foster respect for tribal communities under a president who is making it difficult through performance.

But for practically all the tourists present at Heart's performance, the traditional image of her in her jingle dress will be all they see of Native life. They won't see the dilapidated trailers dotting the hills across Pine Ridge reservation with rusting cars sitting outside.

They won't see the signs reminding everyone driving into tiny Pine Ridge Village to keep their distance and wear a mask "if you value your life" — the reservation is a COVID-19 hotspot and with poor healthcare and a host of pre-conditions, Native Americans are dying from coronavirus complications at a much higher rate than white Americans. Even the checkpoints set up on all roads leading into the reservation, where everyone who isn't an essential worker or resident is turned away, haven't changed that.

"We live here in third world conditions," Julie Richards says through the open window of her car in Pine Ridge village. She admits that she has never voted because in her eyes, no politician has made a difference for the Pine Ridge community, nothing has ever changed. But this year will be different: "We have to vote to get Trump out of office!," she says. "We live here in third-world conditions," says Julie Richards, a member of the Pine Ridge community.

Returns From Scout hopes that more people feel like Richards and decide to head to the polls this November. But first they need to be registered as voters, which is what his initiative is trying to help with. It's a struggle. Back in his office in Rapid City, he holds up a voter registration form and explains all the potential pitfalls that come with filling it out.

To register, you need a physical street address, which many residents on the reservation do not have. You can put a PO Box on the form, but then you need to explain where it is you're located. One resident has put on the form that they live a couple of miles from "Chattering Junction." Everyone on the reservation knows where that is, but will the auditor who receives the form accept it?

Another voter accidentally put their birthdate in the field below the signature instead of the day they signed the form, then crossed that out and wrote the right date. Some people wrote the name of their county on the left side of the pre-printed "County" label on the form, others wrote it to the right of that term.

All of these are minor details, but Returns From Scout is all but certain that they are grounds for rejection, since no standardized rules means that it's up to the discretion of each single auditor whether they accept the voter registration.

"The forms go to white auditors who don't have a very good connection with the reservation," he says. "There's lots of room for interpretation."

The arbitrary rules are reminiscent of how Black voters were kept from the polls during the Civil Rights era in the 1950s and 60s in the US. Asked about how he thinks the situation for minority voters who want to register has changed since then, Returns From Scout has a short answer: "It's gotten significantly worse."

Being shut out from the decision-making process is not just a problem for reservation residents who are struggling with voter registration. It is something that Native Americans across the US are confronted with again and again.

"Native Americans aren't on city council, they aren't on school boards," Returns From Scout says. "We have the same credentials as non-Natives, went to the same colleges, but they still won't let us in. Those are the people who don't want us here."

And that despite the fact that the Lakota were there first.

The largest US Protestant church has confirmed the investigation after a report found it covered up sex abuse allegations over decades. Some of the victims were as young as five.