DW: Your photo book is titled Divided We Stand. In which ways did your project, which involved traveling across the country for months, lead you to experience the polarization of the United States?

Mathias Braschler: You experience it every day because the country is deeply divided, even when you talk to people. The division is very deep. We always asked people whether the country was divided and there was hardly anyone who said no.

Monika Fischer: The rift often affects families or friendships. Many people have told us that if family members or friends have a different political opinion, they can no longer talk about politics at home.

MB: Yes, it's really a problem when there are, say, four children in a family and they meet for Thanksgiving and three of them are Democrats and one is Republican. You can no longer talk sensibly about politics at a family gathering. The climate is so heated that it has become really extremely difficult. 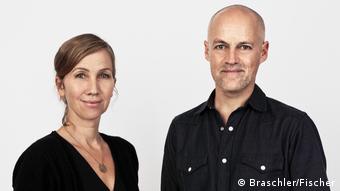 DW: You live alternately in Switzerland and New York. Did your road trip across the US change change your perception of the country?

MF: It certainly has changed. We had already done a similar trip in 2003 for the book About Americans. That was shortly after 9/11, and it rather felt like the people were united against an external enemy. This time the division felt a lot more present. We hardly met anyone who did not agree that the other side was lying, watching the wrong media or influenced by the wrong social media environment.

We were in New York City when Trump was elected. Nobody in New York expected that to happen; it was a shock that went through the city. The next day everyone fell into a great depression. That also meant that we were in a bubble: In New York hardly anyone had noticed what was going in our country — and that's what inspired us to drive around and see how it could get this far. We wanted to find out what people thought when they voted for Trump — or when they didn't vote.

DW: On your road trip you met a wide variety of people. Was there an encounter that left a particularly strong impression?

MB: It's the combination of encounters that made it so special. Of course you have people who leave a stronger impression, whether it's because they live in extreme poverty or because they have an extreme life story, like the former gang leader in L.A. But the combination of protagonists remains what impressed me the most, and that also defines the strength of the project. If you meet enough different people, then you really get an overall portrait of the nation.

MF: A special encounter was the one with Jamie. She is a Walmart employee. We saw her and selected her because she looked so interesting and expressive. We portrayed her and then did the video interview. One of the questions was: What would you say to Trump if you had a minute with him? And, as unprepared as she was, she shot off and immediately touched on all the sore spots of the United States. A very intelligent woman. She said that she spends a couple of hours every day reflecting on things; and she works at Walmart.

There were a lot of surprises and we noticed that many of the stereotypes were not true.

DW: Do you think the division will deepen through the upcoming US election? Or will people find hope again and reunite?

MB: It's a question of the outcome of the election. If Trump wins, it will get worse. American presidents in the past have often used major crises to unite the country. But Trump did not do that; he rather pushed polarization even further. If he wins, which I don't expect, things will definitely get worse.

MF: When we came back a year ago, we thought he would be re-elected. We met so many people who were for him, even though they found him totally unsympathetic and terrible as a person. Most of the time it was about a point that he represented that suited them. And then they would have re-elected him.

But now I think that with the coronavirus crisis, where he really failed, and the recent events related to the Black Lives Matter movement, people feel mobilized to vote and are realizing again that their voice counts.

Photographer couple Mathias Braschler and Monika Fischer live and work in Switzerland and New York. Their photo book Divided We Stand is published by Hartmann Books. The series of works are also on show at the Stapferhaus museum in Lenzburg near Zurich until November 15, at the MASI Lugano until November 22, and at the Lechner Museum in the Bavarian city of Ingolstadt from November 21, 2020 through March 7, 2021.

The interview was translated from the German original by Elizabeth Grenier.

How Angela Davis became an icon in East Germany

In search of identity: The new generation of photo artists from China

Coolness and confusion: Young Chinese photographers contextualize themselves in a country that is changing more rapidly than almost any other. An exhibition in Munich throws light on China beyond the coronavirus crisis.

The photographer extensively documented life in the former GDR and had his every move watched by the Stasi. Now, he has a retrospective of his work in Berlin.

'Divided We Stand': Portraits of a polarized country

What the FBI wanted with photographer Jerry Berndt 25.09.2020

Berndt was a political activist who photographed US social movements from the 60s to the 80s. His works are now on display in Hamburg.