Germany and Russia colluded to invade Poland, US envoy to Warsaw Georgette Mosbacher said in a tweet. Her comments follow claims by Russia's Vladimir Putin that Poland was on board with Hitler's plans. 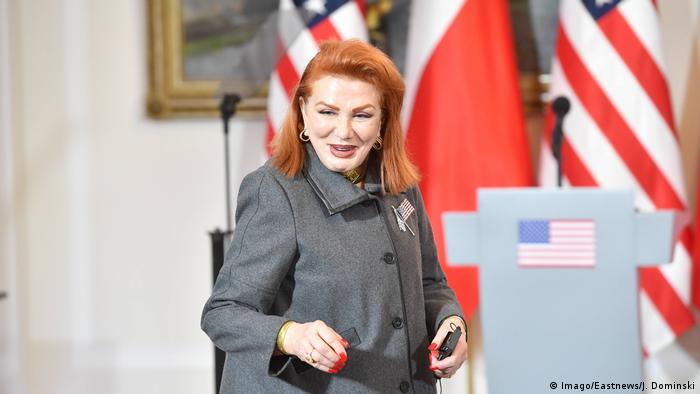 Germany and the Soviet Union were both responsible for the outbreak of World War II, said the United States Ambassador to Poland, Georgette Mosbacher, on Monday.

Her statements, made in a tweet on Monday, were responding to Russian President Vladimir Putin's claim that Poland was responsible for the start of the war.

"Dear President Putin, Hitler and Stalin colluded to start WWII. That is a fact. Poland was a victim of this horrible conflict," Mosbacher wrote.

"The Molotov-Robbentrop Pact served to prepare Nazi Germany's criminal military attack against Poland," Ambassador Rolf Nikel said in a Polish-language post. "The Soviet Union, together with Germany, took part in the brutal partitioning of Poland."

In turn, the Russian embassy in Poland seemed to dismiss the remarks made by US envoy Mosbacher.

"Dear Ambassador, do you really think that you know about history any more than you do about diplomacy?" they posted on Twitter.

Polish Prime Minister Mateusz Morawiecki on Sunday condemned Putin's comments as well, writing in a statement that it was unacceptable to cast perpetrators as victims.

Over the past week, Putin has made multiple comments denying the Soviet Union's role in starting the war, and tried to blame Poland for its outbreak. He also denied that Russia invaded Poland in 1939, purporting that Poland was on board with Hitler's Holocaust plans.

The Polish Foreign Ministry on Friday summoned the Russian ambassador over Putin's comments. "President Putin has lied about Poland on numerous occasions, and he has always done it deliberately," said Morawiecki.

World War II began in 1939 when Poland was invaded by Nazi Germany, followed by Soviet Russia two weeks later. Around 6 million Polish citizens were killed during the war.