Are we flushing away the answer to our fertilizer shortages? | Environment | All topics from climate change to conservation | DW | 14.05.2022 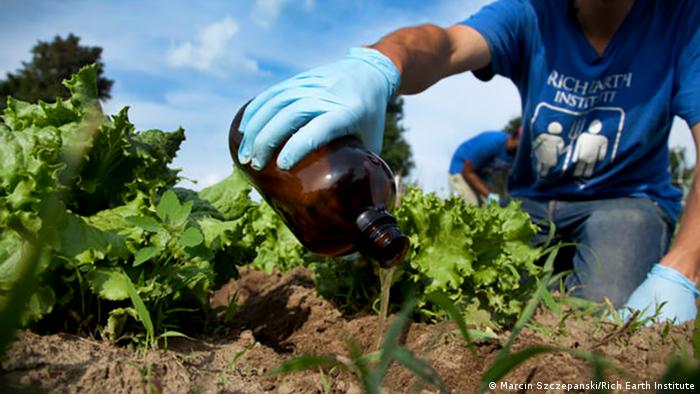 Applying pasteurized urine fertilizer to a bed of lettuce

One probably wouldn't peg Battleboro, a quaint town in the picturesque US state of Vermont, as the host of a "piss off" contest. But every year about 200 people compare who has collected the most urine to win a gold plated cup. And, more importantly, to fertilize crops.

The event is organized by the Rich Earth Institute, a local non-profit that pasteurizes donated pee and supplies it to farms to use instead of synthetic fertilizer. Urine contains nitrogen, phosphorus, potassium and micronutrients, all of which help plants grow but are usually flushed away.

That's why the institute has retrofitted most of its volunteers' homes with toilets that separate urine at the source so it can later be pumped out and transported where it's needed.

"[The volunteers] take a lot of pride in what they're doing," said Abraham Noe-Hays, the organization's research director. "They see it as another way of recycling." 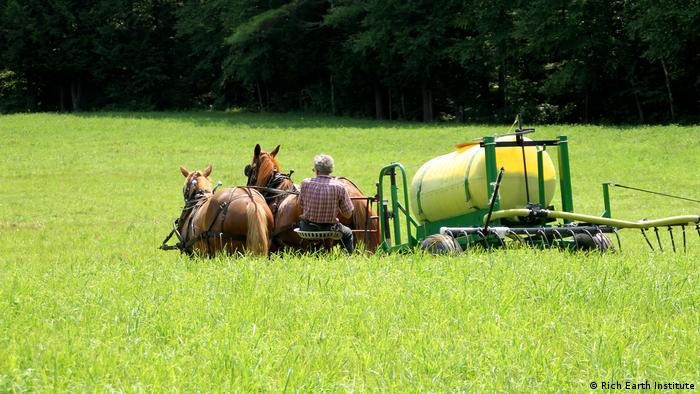 Turning pee into fertilizer isn't restricted to this community. Rich Earth's spin-off company is developing a system that can be used in buildings so it can expand the program to other places.

Further afield in countries like Sweden, France, Germany, South Africa and Australia other organizations are working to repurpose human waste in a bid to reduce reliance on commercial fertilizers, which have their own set of environmental and economic challenges.

Synthetic nitrogen fertilizers pollute groundwater and are a significant driver of climate change. Production and use of such fertilizers accounts for 2.4% of global emissions, according to a 2021 study.

Global phosphorus reserves are also shrinking. And farmers around the world have been facing shortages and soaring prices since Russia, a major fertilizer exporter, invaded Ukraine.

Scientists have long pointed to resources found in human waste as a way to reduce import dependency, says Prithvi Simha, a researcher with the Swedish University of Agricultural Sciences (SLU).

"When there is a shock to the supply chain, how do we grow food? By recycling urine, we add resilience to our food system," he said. 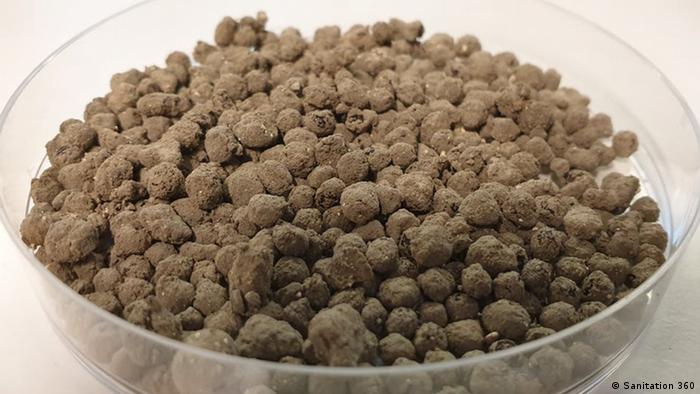 Sanitation 360 developed a way to convert pee into dry fertilizer

About a third of all the nitrogen and phosphorus used in agriculture globally could potentially be replaced by the nutrients won from urine, according to Simha. This percentage grows dramatically for countries like Uganda or Ethiopia, where there is a large population to provide urine, but not much synthetic fertilizer is used because it is too expensive.

From liquid gold to dry fertilizer

Simha is part of a team of researchers who developed a way to turn urine into a smaller volume of solid fertilizer that behaves and looks like the synthetic pellets most farmers currently use.

The SLU spin-off company Sanitation 360, based on the Swedish island of Gotland, equips toilets with cassettes that alkalize urine. The process allows the nutrients it contains to remain stable while a fan evaporates the water, leaving behind a dry powder.

"There's quite a lot of complex chemistry behind how we got there, but in reality it's quite simple to implement. That's why it works well both in the Global North and the Global South," said Simha.

Sanitation 360 has been working with a company that rents out portable toilets. It scaled up its urine collection from 1,500 liters (396 gallons) to 25,000 liters, and, next year, it is aiming for 250,000 liters. The fertilizer won from what it collects goes to local barley crops — and the beer made from this barley "is exactly like any other beer, of course," said Simha after a taste test. 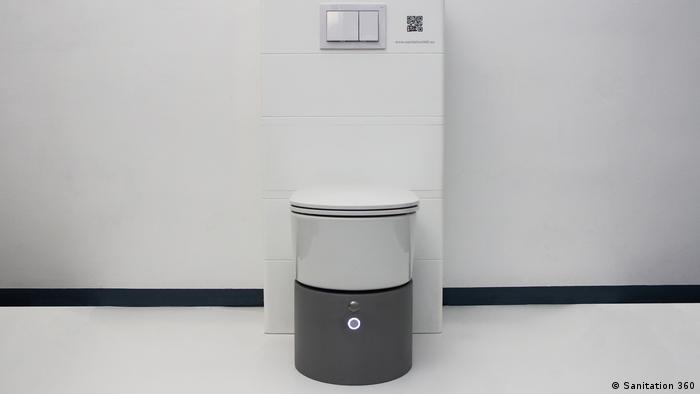 A Laufen toilet that uses Sanitation 360's technology to dry the urine has been installed in Malmo, Sweden

If urine fertilizer is to become mainstream, it needs to be able to compete against mass-produced synthetic fertilizers. That involves getting it certified by national regulators as some parts of the world still label urine separated at source as sewage. But it also involves making the technologies and equipment widely available. The urine-diverting toilet is a vital piece of the puzzle.

If we want to reuse pee for fertilizer, it needs to be separated from our feces, as well as toilet water, in the same way we separate recyclables like plastic from our other trash.

Urine diverting toilets can either be of the flush or dry variety and usually work by collecting the liquid waste in a special basin at the front of the toilet bowl. These models were actually first developed as a way to reduce water pollution. Urine makes up just 1% of wastewater in European treatment plants, but it is one of the main sources of nutrients like nitrogen, which pollute and damage rivers and lakes.

Urine diverting toilets are key to collecting pee at the source

Repurposing the urine diverted at the source into fertilizer is a no-brainer, says Tove Larsen, a senior scientist at the Swiss Federal Institute of Aquatic Science and Technology (Eawag).

"Otherwise you're extracting gold from your wastewater and instead of recycling it into industry, you're just throwing it away," she said.

So far, one of the major challenges with urine-diverting toilets has been that they are considered impractical to use and produce, according to Larsen. But a new model, developed by the Swiss company Laufen and Eawag, could change that, she says.

This model uses the "teapot effect." The plateau at the front of the bowl is manufactured in a way that allows the pee to trickle into a separate hole — similar to when tea trickles down the outside of the pot when poured at an awkward angle.

The flush is also designed to clean the plateau with minimal water, just enough to remove any odor. The major advantage of these new models is that they can be used and manufactured like any other ceramic toilet, according to Larsen.

For now, they are limited to just a few buildings around the world. But scientists hope that as these technologies slowly spread, recycling "liquid gold" will eventually be as easy for everyone as sitting down and, well, peeing.

Malawi: Turning urine into a source of wealth

How human waste is helping Mexican farmers and the environment

The Brazilian president wants to pave the way for further exploitation of protected lands. He is not known for protecting the environment or Indigenous rights.

Is water pollution at a tipping point?