Prime Minister Shinzo Abe has reportedly canceled a trip to Iran. He would have been the first Japanese leader to visit Tehran in 40 years, but he chooses the US security umbrella over the need to secure oil supplies. 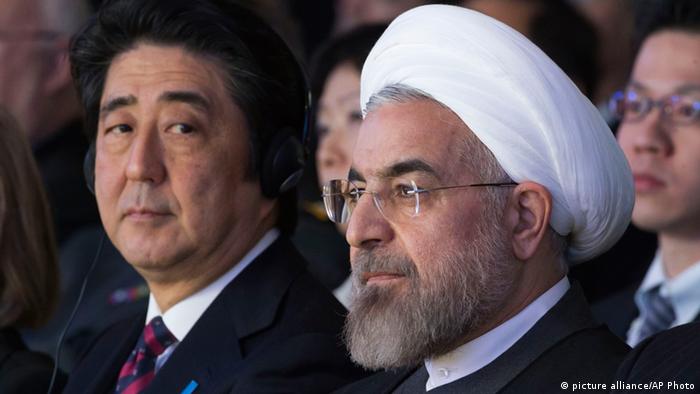 Japanese Prime Minister Abe canceled a scheduled visit to Tehran next week, apparently in response to pressure from the US on countries around the world to isolate Iran and squeeze its oil exports, Japan's Kyodo News cited government sources as saying on Wednesday.

However, Motosada Matano, a spokesman for Abe, told Reuters news agency nothing had been decided about the PM's overseas travel plans.

Iranian media reported in late June that Abe would travel to Tehran in mid-July for talks with Iranian President Hassan Rouhani. The visit would have been the first to Iran by a Japanese leader since Takeo Fukuda met the Shah in 1978.

Tehran appeared to be pleased that Abe would be stopping in Iran as part of a longer diplomatic mission to the Middle East and Europe, with the Islamic Republic News Agency (IRNA) announcing that the Japanese leader would express his support for the Iran nuclear deal, known as the Joint Comprehensive Plan of Action, which was signed in 2015 under the US administration of President Barack Obama.

In May, President Donald Trump announced that the US would withdraw from the agreement, describing it as "defective."

"The deal is defective at its core," Trump said. "If we do nothing, we know exactly what will happen. In just a short period of time, the world's leading state sponsor of terror will be on the cusp of acquiring the world's most dangerous weapon."

The other signatories to the deal – Germany, Britain, France, Russia, China and the European Union – have remained committed to the agreement and have attempted to get the Iranian and American governments to at least return to talks. Trump has instead increased pressure on his allies and demanded that they halt purchases of oil from Tehran.

That puts Japan in a very difficult position.

During his visit, Abe was expected to discuss trade with his Iranian counterpart, including oil. Tokyo has for decades considered Iran to be an important source of energy, an attitude that remains even though Iran now only provides 5 percent of the total annual shipments of oil to Japan, according to the Ministry of Economy, Trade and Industry.

With no fossil fuels of its own, Japan was effectively completely reliant on imports of oil and gas until it began to develop its own nuclear energy sector and, more recently, renewable energy sources. Yet Tokyo lives in fear of a major interruption to its energy supply – such as the one happened after the March 2011 earthquake and tsunami that destroyed the Fukushima nuclear plant and forced the government to mothball every one of the nation's reactors for safety checks.

Abe has to balance that, however, against the security guarantees that Washington provides. And in this instance, security has won out in the equation – although Tokyo did attempt to cover up the prime minister's back-tracking by suggesting that the timing of the visit was now "difficult."

"It was a pragmatic decision by the leader of a country that is in a particularly vulnerable geographic position in East Asia and experiencing significant friction with its immediate neighbors," said Jun Okumura, an international relations analyst with the Meiji Institute for Global Affairs.

"Japan cannot afford to have friction with the US simply because of the threat that is posed by North Korea and, more importantly and over the longer term, China," he told DW.

Okumura also played down criticism that Abe's decision showed him to be a "lap-dog" to the US president.

"I would not say that Japan is a lap-dog to anyone; I rather think that Abe is simply trying to stay out of the dog house," Okumura said.

Jeff Kingston, director of Asian Studies at the Tokyo Campus of Temple University, agrees that Japan is in a precarious geopolitical position – but he points out that Abe might be making a mistake if he believes that Trump will come to Japan's aid should a crisis erupt in Northeast Asia.

"Japan is in an awkward position in that it depends on the US for its security umbrella, although Trump seems to miss no opportunity to pull the rug from beneath Abe and diplomatically embarrass him," Kingston told DW.

"Despite that, Abe seems to keep running after him although, in truth, there is not a lot he can do because he doesn't get to choose the president. For Abe, it is more important to maintain Japan's security relationship and solidarity with the US," he added.

The Japanese government's announcement came just days before Mike Pompeo, the US Secretary of State, is due to arrive in Tokyo for talks after visiting North Korea.