Ukrainian refugees: Can Berlin cope with the influx? | Germany | News and in-depth reporting from Berlin and beyond | DW | 14.03.2022

Ukrainian refugees: Can Berlin cope with the influx?

The first German stop for most Ukrainians fleeing war at home is Berlin's main train station. Despite a surfeit of volunteers and the best efforts of aid organizations, the work remains challenging and heartbreaking. 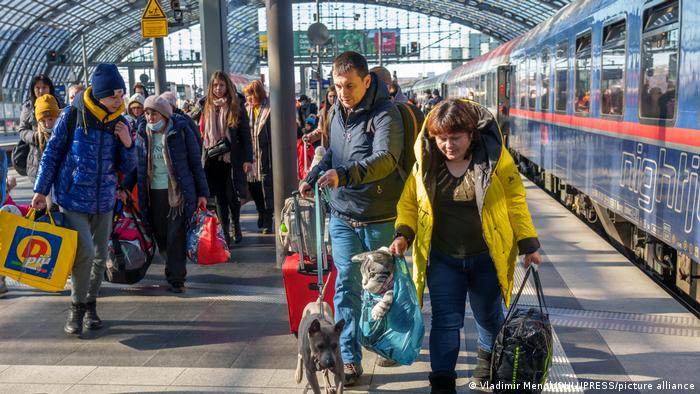 Berlin is often the first stop for Ukrainains coming via Poland

It is 1 p.m. and the large white tent opposite Berlin's central train station is already full. There are many voices to be heard and row after row of people sit on long wooden benches. One corner of the tent has been turned into a small play area for children. A lot of the people here have suitcases with them but some only have a plastic bag and the clothes they are wearing.

Zhanna N. is one of those on the benches. The Ukrainian woman in her mid-40s, who  prefers not to give her full name for security reasons, left Ukraine three days ago and has just arrived here in Germany.

"This is all just a huge tragedy for our country," she told DW. "It was a shock. So many civilians will die. It is only now that we are slowly realizing that this is war and also that we have no idea how long this will go on."

Zhanna looks tired and the black circles under her eyes tell only a little of the horrors she has lived through, since Putin's military invaded her country.

At first she and her daughter moved from the Ukrainian capital, Kyiv, to the western Ukrainian city of Lviv. After that, they crossed into Poland and then came to Berlin. Her mother, her ex-husband, her brother and other relatives remained in Ukraine. She hopes they will survive and also that she might reunite with other members of her family, who have also become refugees.

"My sister also left but she's not in Germany," she explained. "We are going to try and meet so we can be there for one another."

Berlin at its limit 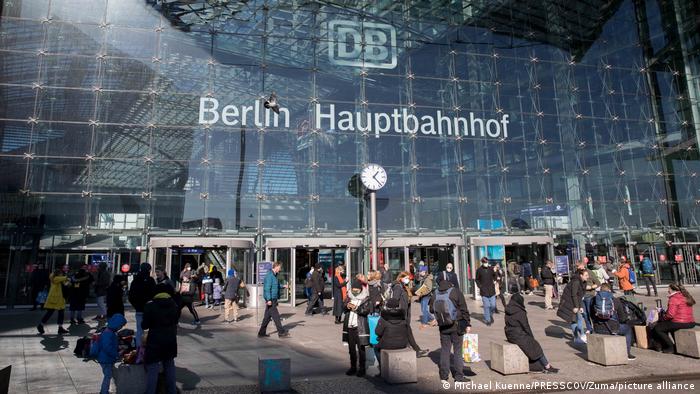 It's the same for thousands more Ukrainians. Every day, some 15,000 arrive in Berlin. For almost all of those who travel via Poland, Berlin is their first stop in Germany. Here at the German capital's central train station and at the main bus station in the west of the city, is where all the buses and trains from the border arrive.

It's proving to be a serious challenge for the city. Berlin's mayor, Franziska Giffey, believes the city-state is nearing its limits, as to what it can do for the refugees. Some of the Ukrainians are now being accommodated in halls usually used for trade fairs, she said. That just shows "we are at the limits of our capacities."

Berlin's authorities have asked that responsibility for the incoming refugees be better shared among other German states too. They have even asked for help from the German army. A lot of Germans are also volunteering to help deal with the unfolding humanitarian catastrophe here.

"Their hearts are there, the willingness to help is there and the solidarity is there," German Chancellor Olaf Scholz said about the countless private initiatives and the generosity of ordinary citizens.

You can see that here at the train station too, at the hastily assembled help center. The place is teeming with volunteers.

For those arriving from Ukraine, the volunteers are recognizable because they're wearing orange or yellow fluorescent vests. They offer the most important things first: Information, clothing, food.

Among the volunteers is Erika, a blonde woman aged around 20. She has Russian roots and has been in Berlin about a year. At the moment she is spending five hours daily at the train station helping out.

"A lot of those arriving are just really tired," she explained. "Others are completely traumatized and need somebody to tell them what to do now. Even if we don't know everything, we try to give them as much instruction as possible." 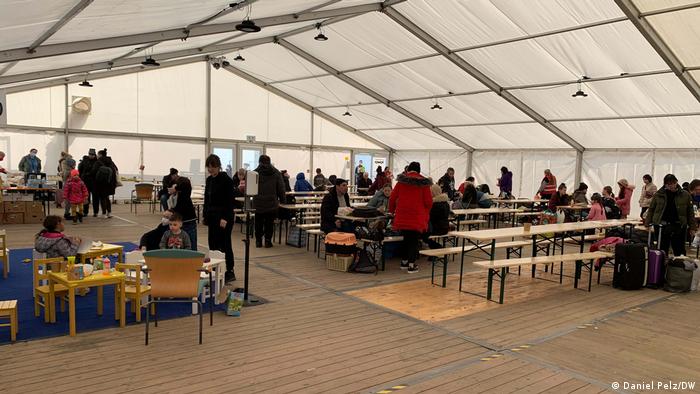 Some of the Ukrainians say they finally feel safe in Berlin

In the first days of the Ukrainian war,  it was only volunteers like Erika who were helping at the train station. In the meantime though, other aid organizations are playing a role, such as the Berlin City Mission, a large, Christian-based organization.

The Berlin City Mission's spokesperson, Barbara Breuer, is proud of what her fellow Berliners are doing.

"We are seeing a huge sense of solidarity here at the Berlin station," she noted. "A lot of people are just taking the day off and coming along, and then helping as much as they can."

At the same time, Breuer is cautious about the selflessness of the volunteers. She knows all about this because of her time as a volunteer.

"They really have to be careful about burn out," she explained. "A lot of the people have been coming here every day since this crisis began, working between 18 and 20 hours and then, in the evenings, they break down or cry, when somebody talks to them."

Such empathy for the Ukrainians fleeing their homes is a heavy burden to carry, she explained. 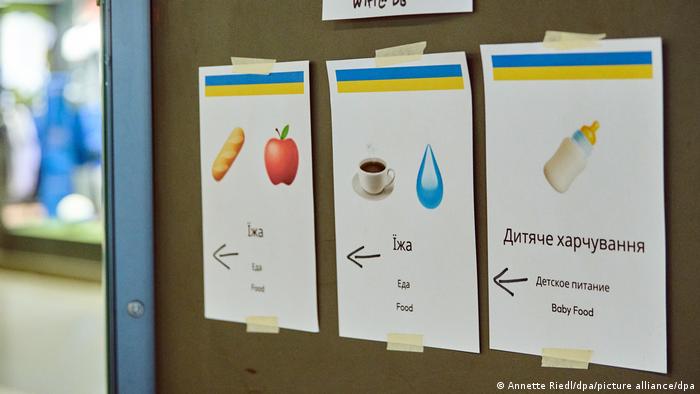 Back in the tent erected by the Berlin City Mission, we meet Ruslan S. He takes a deep drink from the fruit juice in front of him. He has no idea what will happen next, he said despondently.

"In Ukraine, I was only frightened," said the man, originally from Dnipro, the fourth-largest city in Ukraine. "The Russians are destroying our cities. I'm not that worried about myself really, more worried about my family."

Ruslan and his family came to Germany via Slovakia. They spent one night in a church there and then made their way to Germany. He feels like now they can finally relax.

"I really cannot go back to Ukraine," he explained. "So much infrastructure has been destroyed. And we just don't know what could happen next. No, my family won't be safe in Ukraine," he concluded. 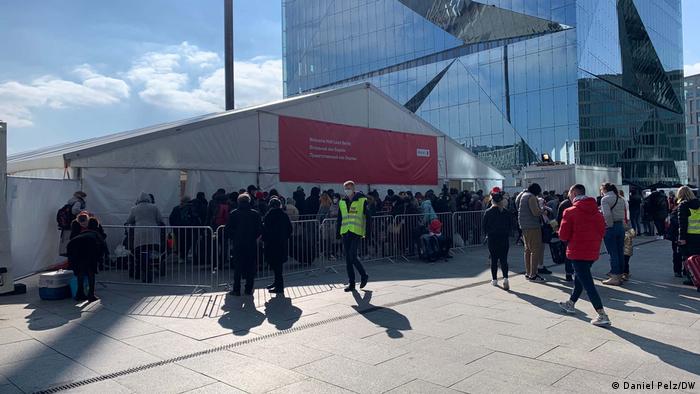 Ruslan is noticeable because he is one of the only men in the tent. The Ukrainian government declared martial law after the war started and forbade any men aged between 18 and 60 from leaving the country. They are all supposed to stay and fight Russia.

Ruslan's cousin, Vlad, is really angry about this. He lives in the United States and traveled to Germany especially to help his relatives. But his two other cousins couldn't get out of Ukraine even while their families have made it to Berlin.

"They miss their father. It's terrible," Vlad said. "How are they supposed to manage without him? Nobody knows what's going to happen."

While we talk, more buses arrive. Ruslan and Vlad watch as more people pack up their things and leave the tent. The buses will take the Ukrainians to government-run welcome centers and from there they are likely to be taken on to other German states.

But even as those people leave to get on the buses, the next train from Poland has arrived at the train station. It won't be long before this large, white tent is full again.

This story was originally published in German.

One of the poorest countries in Europe has taken in tens of thousands of Ukrainian refugees. That support, and fear of further Russian aggression, have brought the tiny southeast European nation international attention.

From Ukraine to Poland: Refugees at a crossroads

Tens of thousands of refugees have crossed the border into Poland. At a reception center in Korczowa, Ukrainians — along with students and migrant workers from Asia — are trying to figure out their next steps.