Ukrainians rush to Slovakian border in desperate bid to get to safety | Europe | News and current affairs from around the continent | DW | 04.03.2022

Tens of thousands of Ukrainians fleeing the war have headed for the city of Uzhhorod near the Ukrainian-Slovakian border. Many are traveling on to the Czech Republic, which the border region once belonged to. 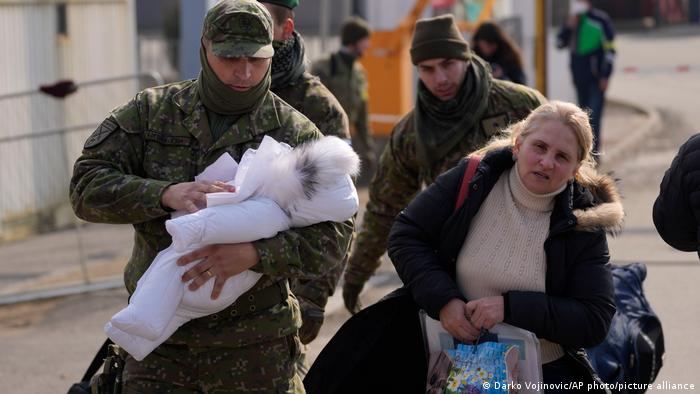 The cold winter sun rises over the Carpathian mountain range. A kilometer-long convoy of cars has formed in front of the largest Ukrainian-Slovak border crossing, Vysne Nemecke.

Hundreds of Ukrainians are already standing on the top of the hill where the road leads down to the Ukrainian customs — all of them are fleeing the war in their country, trying to cross the border and get to safety in Slovakia in the European Union.

The crowd mostly consists of women and children, from babies to teenagers. The toddlers are in strollers or in their mothers' arms. Most people are just carrying backpacks, large handbags or shopping bags.

There are hardly any men in line and those who are, are only here to escort their families to the border. Vasil Balchuk, a Ukrainian man in his 50s, has brought his wife and children here.

"My wife, daughter-in-law and children are going to relatives in the Czech Republic,” he says. "I'm currently serving in the territorial defense of Uzhhorod. If the Russians come here too, I will fight. I've trained in the army."

Like many of his compatriots, Balchuk firmly believes that the Russian army can be defeated by Ukraine: "We need to hold Kyiv for a few more days, then Putin will be forced to negotiate. And an independent Ukraine will survive."

Still, he believes the situation is too dangerous for his wife and children and prefers sending them to a safe foreign country.

Escape to the Czech Republic

The waiting time at the border seems endless, for hours the line of cars does not move at all or only at a snail's pace. The border clearance staff is slow, especially on the Ukrainian side. Meanwhile, more people from Ukraine keep arriving with the line of cars getting ever longer. Soldiers from the Ukrainian border guard struggle to maintain order.

Volunteer firefighters and aid workers offer water, tea and refreshments for those waiting. They've also set up a large tent for people to warm up a bit. But no one from the long queue in front of the border crossing heads there, afraid of losing their hard-won spot in the line.

"People, no pushing! We can't let you in until we get instructions," the commander of the Slovakian border guard unit keeps shouting. No exceptions are made, only diplomatic vehicles have priority.

Tatiana wants to cross the border with her four children. "We are going to Kolin in central Bohemia to visit my husband, he works on a construction site there," she explains in fluent Czech. There are many people here with ties to the Czech Republic and Slovakia, and that's where they want to go.

Carpathian Ukraine, today the Ukrainian region of Transcarpathia, was the easternmost part of what was Czechoslovakia between the world wars.

In 1945, however, it was annexed by the Stalinist Soviet Union in a violation of the 1943 Czechoslovak-Soviet State Agreement. As a result, thousands of residents left their homes for Czechoslovakia. After the collapse of the USSR, other Carpatho-Ukrainians joined them to work on construction sites and in factories in the successor states of Czechoslovakia, the Czech Republic and Slovakia.

Today, about 100,000 immigrants from Ukraine have Czech citizenship, and 200,000 live permanently in the Czech Republic. About 10,000 Ukrainians live in Slovakia with a big chunk belonging to the ethnic Ukrainian minority, which settled mainly in Presov and near the Ukrainian border. There, place names and street signs are both in Slovakian and Ukrainian.

In Uzhhorod, there are plenty of reminders of its Czech past like this bust of President Tomas Masaryk

In the Ukrainian city of Uzhhorod itself, there are several reminders of the Czech past. A district with buildings of the Czechoslovak government from the 1930s is a throwback to the time before 1945. There's also a monument to the first Czechoslovakian president, Tomas Masaryk.

The bridge over the Uh River is also named after him, as is a local school. "Masaryk's Jubilee School" says a sign in Czech at the entrance to the building.

Today, Uzhhorod has 100,000 inhabitants. Before the pandemic, the town with its picturesque location was very popular with tourists. Now, all hotels, guesthouses and hostels are fully booked by refugees from Ukraine.

"I don't know where to start working," says Natalia from the Hostel Kakadu. "We're completely overcrowded, and new people call all the time asking for accommodation."

The hostel, she says, is now a refugee camp, housing people from all over Ukraine, but mostly families with children and many with pets.

"This is the last cat. No more pets," Natalia tells the new arrivals. Although she could, she has not raised prices. "You shouldn't make money from war," she says. Many other locals see it the same way.

People in and around Uzhhorod believe that the war started by Russia will not spread here. "We are protected by the mountains of the Carpathians, which are up to 2,000 meters high, and the proximity to NATO countries like the Czech Republic or Slovakia," Oleksandr Macucha said during a discussion with friends over a beer in the evening. "

If the Russians want to come here, we will wait for them in the mountains. They won't get through," he adds

A friend of Macucha's isn't so sure. "The mountains can't stop bombers and missiles. They could attack us tomorrow," the slightly older Arseniy says.

'We are fighting for Europe'

Both the geographic proximity to Slovakia — and thus to the West —and the historic ties of the people on either side of the Ukrainian border has raised questions about why the region is being left to fend for itself.

"We have monuments to Masaryk here, we used to belong to Czechoslovakia. Why don't the Czechs, Slovakians and all of Europe come to our aid now?" asks Vasil, a cab driver.

In recent days, the numbers of Ukrainian refugees at the Slovakian border have been rising

An elderly Ukrainian woman at the border crossing asks Slovak President Zuzana Caputova for help. "Please help Ukraine, Madam President. We want to get to Europe. Putin is attacking not only Ukraine, but also you, Europe. In Ukraine, we are fighting for Europe."

Ukrainian refugees with a mission

At the border crossings, both the Czech Republic and Slovakia are helping the refugees. In the first week, about 70,000 refugees crossed the border into Slovakia. Most of them have moved on to Ukrainian relatives and friends in the Czech Republic, while only a few thousand have stayed in Slovakia so far.

"The main flow of refugees hasn't started yet. And it will be much, much bigger," an official from Slovakia's presidential office told DW. "But we are ready, we can accommodate tens of thousands of refugees from Ukraine in our country."