Ukrainian Catholics in Germany overcome despair and swing into action | Germany | News and in-depth reporting from Berlin and beyond | DW | 09.03.2022

Ukrainian Catholics in Germany overcome despair and swing into action

Russia's invasion left Ukrainians in Germany bewildered and sad — then they sprang into action. Congregations of the Ukrainian-Greek Catholic church all over the country are helping refugee efforts as much as they can. 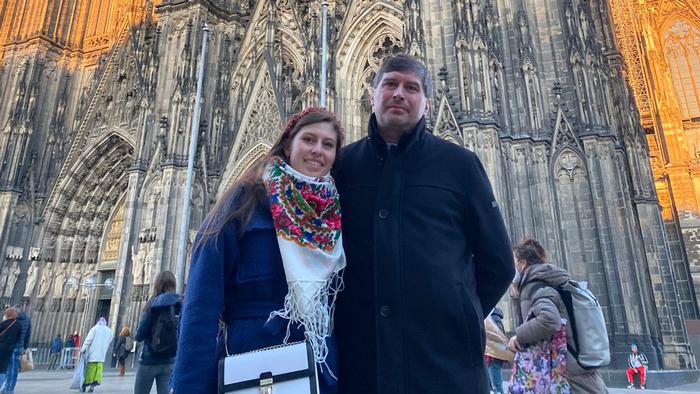 Mykola and Solomia Pavlyk are organizing help for their Ukrainian compatriots

Vladimir Viitovich,a priest with the Ukrainian Greek Catholic Church (UGKK), seemed stunned, almost at a loss for words. He had just received a call: "In a few hours, a train with 350 refugees from Ukraine will arrive here in Munich. We need to get ready."

Viitovich is no longer just the pastor of the Cathedral of the Intercession of the Mother of God and of St. Andrew: He has been comforting his parishioners in Bavaria — but he has also been busy organizing, carrying boxes and looking for volunteers. 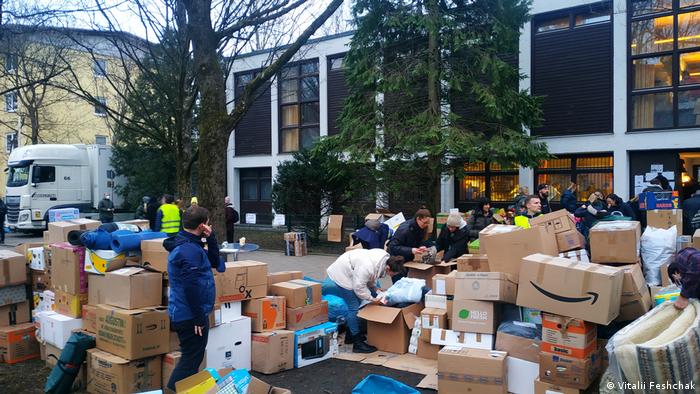 'There will soon be more. Many more'

The UGKK has a history going back more than 400 years. Its head is the Pope in Rome, though its liturgy and traditions differ from those in Germany's Catholic churches. For instance, many of the priests are married and have families.

In Ukraine, about 5 million people belong to this church, most of whom live in the west of the country. "In Germany, there are officially about 80,000," Andriy Dmytryk told DW. "But there will soon be more," he added. "Many more."

Dymtryk is chancellor of the UGKK-Exarchate, which covers Germany and Scandinavia. The church has about 50 congregations throughout Germany — nearly all of them are organizing relief efforts: collecting donations, sending supplies for Ukraine.

Many trucks worth of aid

One of them is the church of Christ the King in Düsseldorf, which sent eight large trucks within a week of Russia's invasion of Ukraine.

Pastor Mykola Pavlyk's daughter, 21-year-old Solomia Pavlyk, is one of the organizers. "You get the feeling that everyone wants to help because it makes them feel better," she said. The student describes the bewilderment of the first few days of the invasion,  the pain when she saw the images out of Ukraine, her deep concern for her relatives. "It really threw me. We just sat there and cried."

Next, they got to work. The actions Pavlyk describes are familiar to many communities: people driving long distances with cars full of relief supplies, including many Russian speakers. Dozens of volunteers. The student is astonished that many thousands of people are attending protests in support of Ukraine. "Three or four weeks ago we were there with only 50 or 100 people," she said.

The parish is also preparing to host refugees. Solomia Pavlyk is expecting an aunt and cousins. 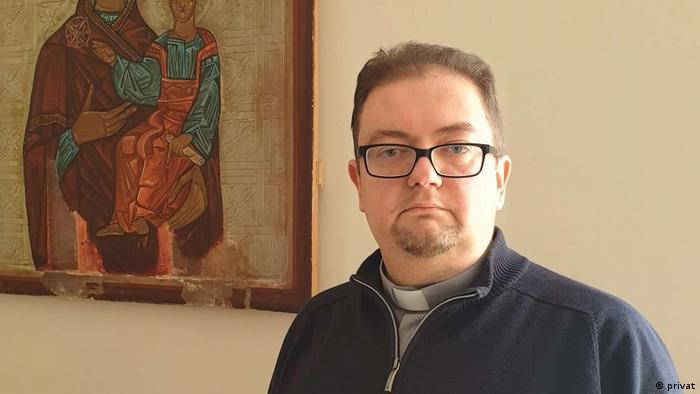 In Stuttgart, Natalia Bondar is one of the organizers. She herself is Ukrainian Orthodox but volunteers as a cantor at the Ukrainian Greek-Catholic congregation. She too describes how overwhelmed the community has been by the help.

"Of course, we are all stunned, frightened, shaken," she said. She added that she has elderly parents in Ukraine. "They don't want to leave," she said. "My father is 75 and wants to defend his house. He has two axes he plans to use as weapons." She added: "We trust in our forces, in Ukraine. We trust in God. We trust in the army."

It is one of the many small dramas in the present great drama. "No one person can handle this," said Natalia Bondar. So, she organizes, collects, and helps — to have something to do. In the meantime, the first refugees have arrived – two young women and three teenagers, who could only bring a bag each with them.

In Germany's Ukrainian communities, the energetic will to provide support stands alongside despair.

When the UGKK congregation in Berlin held a service calling for peace, Father Sergiy Dankiv took up the microphone with a request: "We especially need pastoral, psychological and therapeutic support. Now.". That applies to the newly arrived refugees, as well as to the helpers. 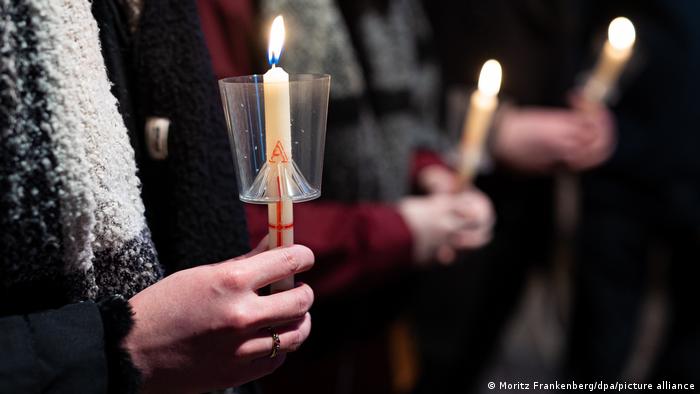 That need is confirmed by Dymtryk, who remains a parish priest in Ingolstadt. "When I get there, I first have to listen for two or three hours, comfort people in their suffering, try to ease their restlessness," the 44-year-old reports. Even the clergy have their limits. His organization plans to meet with German Catholic bishops to discuss how they can access more support.

Pastor Viitovich from Munich has an update about the 350 refugees who arrived on the train a few days earlier. "It was a long story," he said. They were first stopped at the border, then officials divided them amongst different contacts. "We could accommodate 30 of them at private addresses."

More refugees will be coming, he said. "We need all the help we can get." How are his congregants coping? Many of them have lived in Munich for a long time and still have relatives in Ukraine. Viitovich speaks of the fear people have for their homeland, their friends. The anger. Their faith also plays a role. But as a pastor, he sees their engagement in the relief efforts as "not so much a question of faith."

Many of the helpers said that, so long as they were there, they felt fine. "The work here, it's also a distraction — it helps pass the time," Viitovich said. "Sometimes it makes you want to cry."

Ukraine War: The role of the Orthodox Churches