Life in wartime Ukraine: Silence and violence | Europe | News and current affairs from around the continent | DW | 13.03.2022

DW correspondent Mathias Bölinger has been in Ukraine since the Russian invasion began. He reports from the capital, Kyiv, on the strange combination of business as usual and utter despair. 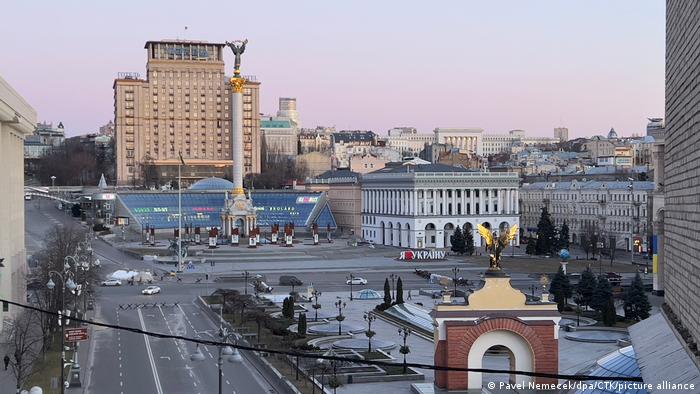 Kyiv is emptied of around half of its inhabitants, the government says

In Kyiv's hipster Podil district, there is a sandwich board advertising mulled wine, coffee, and tea. The sale of alcohol is forbidden under martial law, but a man is still selling coffee and tea through a basement window. We are astonished to see that he is open.

"How nice that you are still here!" we say. "Naturally, I am," he responds nonchalantly. But this is everything but natural. Though the Ukrainian capital was full of such places before the war, most of them are now closed. Behind his window, the man is like a relic from the past.

One thing characterizing this war is the uncanny convergence of things that do not fit together: silence and violence, daily life and fear. When the first Russian bombs landed in the last week of February, I happened to be in the east of the country, in Donbas, where fighting has been going on for eight years already. The violence had already escalated ahead of the invasion that Russian President Vladimir Putin was planning. Villages which had remained calm for years despite the conflict were suddenly being shelled. Many locals felt a sense of impending doom. 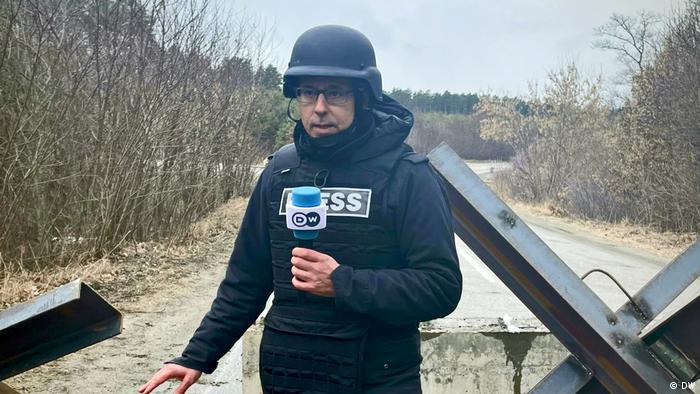 "The front passed through our village twice, but we never experienced anything like this," said Olena Makarenko, a social worker in the village of Vrubivka. Two shells came down not far from her own house. A tipsy man on the main square of Kramatorsk prophesied that there would soon be a real war, as if there had not been ongoing fighting for years already. Others brushed off the danger: "What can happen? We have long got used to the war," said a local politician.

Ukraine: Children in a warzone

On the day that Russia invaded, my colleague Nick Connolly was on the night train from Kyiv, coming to replace me. I had a ticket for the afternoon train back to the capital. Nick called me in the middle of the night: "It has begun," he said.

Since we were concerned that train stations might become targets, we decided that he should get off the train as soon as possible. He got off at the small town of Sakhnovshchyna, while our cameraman Zhenya Shylko and I got into the car and set off to pick him up.

When we arrived, people seemed unfazed by the news. They were calmly preparing themselves for what might come, waiting patiently in long queues in front of ATMs, buying supplies at the local stores. There were queues of cars at the gas stations.

"Take some food, you do not know when you will get some again," the saleswoman at the bakery told us. She had just come back from visiting her daughter in Vienna. We set off for the Ukrainian capital with three bags of pies.

I have rarely experienced such an idyllic cross-country drive. People stood chatting in the villages; there were fluffy clouds in the sky, which had cleared up after days of gray weather.

But from time to time, we could see billows of smoke on the horizon. Business as usual, but for how long?

Now, the impact of the war is visible everywhere, and Kyiv seems like a ghost town. Like the cafes and kiosks, almost all stores have shut except those selling essential items. There are concrete barriers on the roads and intersections, and anti-tank obstacles, made of crossed steel beams and nicknamed hedgehogs, are set up in front of the checkpoints where people are asked for their IDs. According to the government, some half of the inhabitants are thought to have left. Those who did stay do not hang around outside, usually going out just to shop or walk the dog. Sandbags and steel hedgehogs are now commonplace in Kyiv

Despite this, it is almost business as usual in many places. The supermarkets are still full, with only alcohol in short supply. In a luxury delicatessen that was popular among affluent Kyivans before the war, it is still possible to buy Spanish ham by the slice, and live lobsters swim in an aquarium. These, too, are probably relics from before the war whose lives the conflict has temporarily saved and not yet destroyed.

Twenty kilometers (ca. 12 miles) away is Irpin, a suburb in which people have been holed up in basements for days, many of them trying to figure out if they should attempt to make a run for it when no shelling can be heard. That is where a woman and her two children were killed a few days ago. They had almost made it when they were hit by a Russian shell. The picture of their bodies amid their suitcases went viral. We arrived a few days later with several other journalists, easily recognizable in the crowd of fleeing people by their bulletproof vests and helmets.

Irpin was popular with the urban middle class for whom Kyiv's traffic and real estate prices had become too much. They moved to new, brightly-colored apartment buildings, which were not cheap but cheaper than in the center. One square meter went for over €1,000 (ca. $1,100). Now, smoke rises from behind the buildings, and gunfire can be heard in the distance, as dozens of people clamber across wooden planks to cross the river. The bridge was destroyed long back to slow the Russian advance. This is one of the "green corridors" for safe civilian passage that news reports have been talking about. 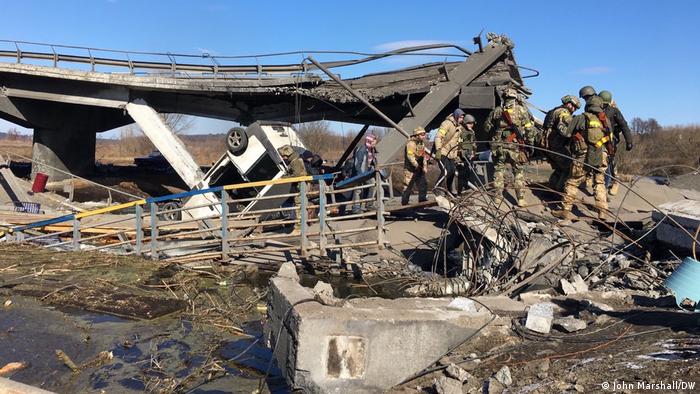 Today, the cease-fire is holding. A woman in her 30s named Daria, who set off early in the morning with her father from a village dozens of kilometers away tells us about the damaged military equipment she saw and the dead bodies they passed. She says that they were able to get on one of the yellow city buses that pick people up as soon as they reach Ukrainian-controlled territory. "The roads are destroyed. It was hard to get here. It's terrible." 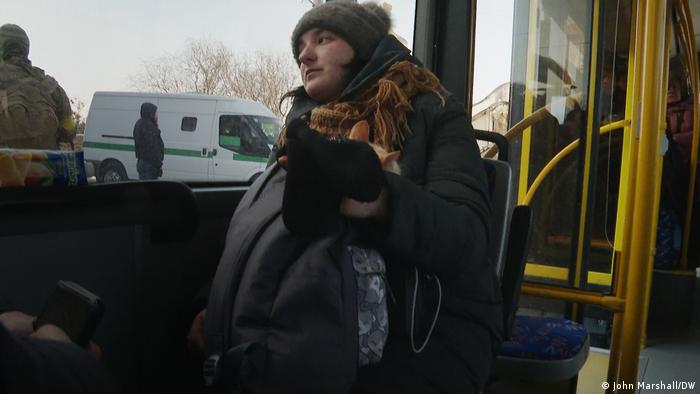 Daria fled her home with her father and cat

She says that she spent two weeks in the basement before daring to flee. She tells us that Russian soldiers held a gun to her head. And that they confiscated people's phones and ransacked apartments. Now that she has arrived here, she is a little less scared, able to dry her eyes and pet her cat, which she brought with her in a shopping bag. She is about to continue her journey on the yellow bus to her daughter who lives in another part of the city. In one of the districts where people are still able to shop in supermarkets, while wondering whether the war will come to them soon as well.