Ukraine′s Volodymyr Zelenskyy: From comedian to national hero | Europe | News and current affairs from around the continent | DW | 26.02.2022

Volodymyr Zelenskyy was seen by many as a comic actor who stumbled into the presidency. During the Russian war on Ukraine, however, the 44-year-old has matured into a respected statesman. 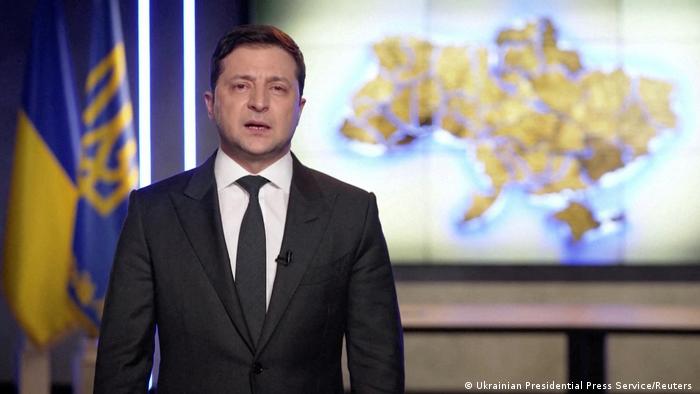 President Volodymyr Zelenskyy spoke in Russian during a televised address on February 24, 2022

An actor, a political satirist, underestimated even by his supporters, decides to switch careers and stand for the highest office in the country. It's almost inconceivable. And yet, this man has something many politicians lack — something that enables him to rise above himself and shine, especially in times of crisis: He is an outstanding communicator. Many of Volodymyr Zelenskyy's sentences will be remembered for years to come, and will eventually find their way into the history books.

On June 12, 1987, at the Brandenburg Gate in Berlin, the former Hollywood actor Ronald Reagan, who had by then been US president for seven years, declaimed the words that are repeatedly quoted whenever people refer to the period that ended the Cold War: "Mr. Gorbachev, open this gate… Tear down this wall."

Nearly 45 years later, a man with a similar entertainment background speaks to his countrymen in video messages as the national leader, addressing them as "Free people! Free country!"

Zelenskyy says things like: "We Ukrainians are a peaceful nation. But if we remain silent today, we will be gone tomorrow!" He is fiercely critical of the lack of support from abroad, saying, "We need an anti-war coalition. We are defending our country alone. The most powerful forces from all over the world are looking on."

Zelenskyy: 'We are alone in defending our nation'

From 'Servant of the People' to Ukraine's president

Ronald Reagan died 18 years ago, yet many in the US still revere him: To them, he is practically a saint. Zelenskyy appears to be building a similar status for himself in Ukraine. But it is not entirely clear what will happen to him in the coming days and weeks. Reports are circulating that Russia intends to kill him. Zelenskyy himself has speculated that one of the aims of the Russian attack is to overthrow him, and said the enemy has declared him their number one target.

Just a few years ago, Zelenskyy was an actor and entertainer, who satirized corruption and mismanagement in Ukraine by playing the Ukrainian president in the popular television series "Servant of the People." Elected in 2019, he has quickly developed into a serious statesman who seems effortlessly able to strike the right tone in a crisis. Perhaps it is precisely because, before becoming president, he was a comedic actor, presenter, and outstanding rhetorical talent, which enabled him to use words to achieve the greatest possible impact. 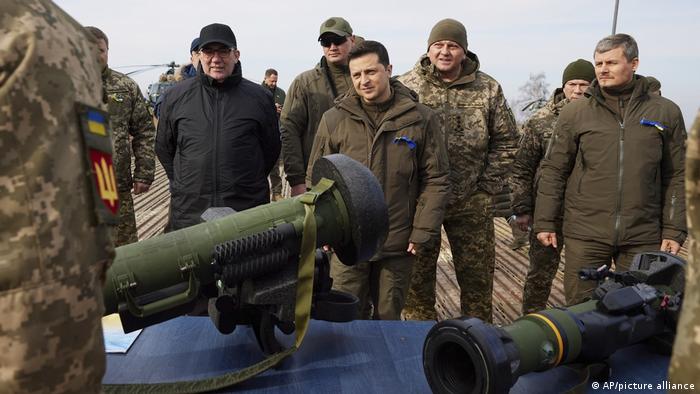 President Zelenskyy at a military drill in Rivne, northern Ukraine, on February 16, 2022

Zelenskyy as an outstanding communicator

Now that Russia has invaded, the situation in Ukraine seems increasingly perilous, and each of Zelenskyy's appeals has been more urgent and impassioned than the last. Observers regard the speech he made just after the Russian invasion began as the best of his life. Emotional, fearless, and resolute, he told the Russian troops: "If you attack, you will see our faces, not our backs!"

The Ukrainian president has also perfectly mastered the art of communicating via Twitter. Every few hours he tweets pithy statements to the world. At midday on Friday, for example, he thanked Sweden in Ukrainian and English for its military, technical, and humanitarian assistance, concluding that they were "building an anti-Putin coalition together."

It is part of the paradoxical story of this war that, while in military terms Ukraine is hopelessly outgunned by the attacking Russians, when it comes to rhetoric Zelenskyy defeats Putin hands down. Following the Russian president's confused, hour-long speech in which he recognized the separatist regions of eastern Ukraine as independent republics, Ukraine's Zelenskyy reassured his compatriots: "Don't panic! We are strong and ready for anything. We will defeat everyone, because we are Ukraine!", and in doing so forestalled mass panic.

When the Russian president speaks of baseless claims of "genocide" in eastern Ukraine, and rants about "denazification" as a pretext for war, it must seem like pure mockery, especially for Zelenskyy. The Ukrainian head of state — who grew up in a Russian-speaking family — is Jewish. His grandfather, who was in the Red Army, lost three of his brothers in the Holocaust. 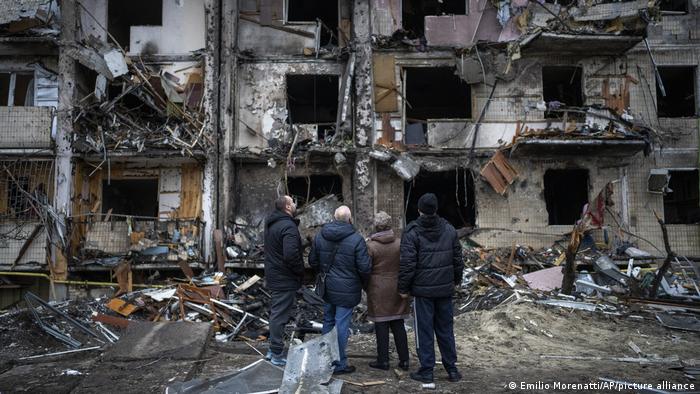 The capital city Kyiv has come under attack, and at least one military plane has been shot down

Zelenskyy has probably never been as popular in Ukraine as he is right now. Yet before the war with Russia, many of his countrymen were anything but satisfied with their head of state. He was unable to keep the overambitious promise he made when he took office three years ago: that he would end the conflict in eastern Ukraine.

The progress envisaged in the Minsk agreements — which aimed to resolve the conflict in eastern Ukraine — failed to materialize; instead, the accords gradually disintegrated altogether.

And then there was the scandal of the Pandora Papers, and the involvement, of all people, of the supposed Mr. Clean who was fighting the oligarchs. The investigative reports, conducted by an international network of journalists, revealed, among other things, that Zelenskyy had ties to offshore companies. According to the report, Zelenskyy's longtime business partner — who later became a top presidential aide — invested part of the income in London high-end real estate, while the president's wife Olena is said to be a beneficiary of one of the offshore companies. 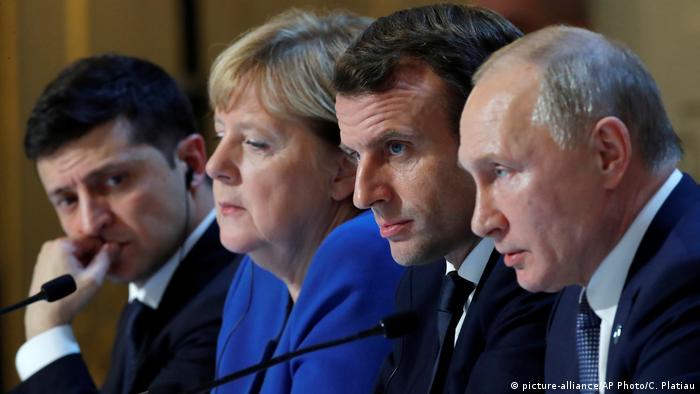 The Normandy format talks between the Ukrainian, German, French and Russian leaders (seen here in December 2019) tried to resolve the crisis in Ukraine's separatist regions

Incidentally, by the late 1970s Ronald Reagan was seen as yesterday's man. He had twice failed to win selection as the Republican presidential candidate, losing to Richard Nixon in 1968 and Gerald Ford in 1976. But then, in 1979, the Soviet Union invaded Afghanistan, the Cold War flared up again, and a year later Reagan won the US election against incumbent Jimmy Carter.

More than four decades later, after Russia's attack on Ukraine, the world is facing a new version of the Cold War. And Volodymyr Zelenskyy's role in it is yet to be determined.

Volodymyr Zelenskyy: 'Russia will have to talk to us sooner or later'