Fact check: Do Vladimir Putin′s justifications for going to war against Ukraine add up? | Europe | News and current affairs from around the continent | DW | 25.02.2022

Fact check: Do Vladimir Putin's justifications for going to war against Ukraine add up?

Shortly before launching a full-scale war on Ukraine, Vladimir Putin outlined his reasons for the attack. Russia, he said, must "defend itself" and "denazify" Ukraine. Much of this is false. 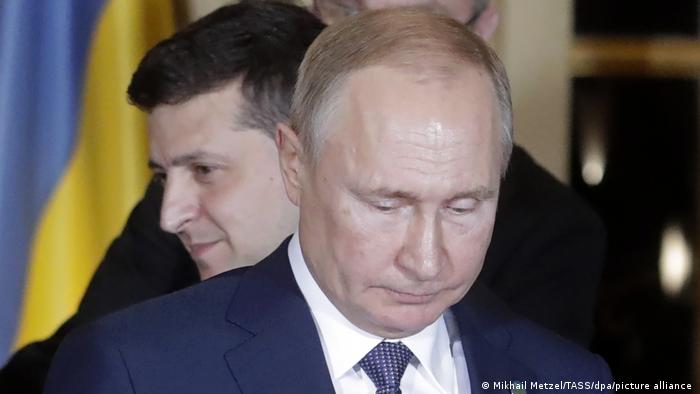 Does Ukraine need to be 'denazified'?

Claim: To stop the alleged mistreatment and "genocide," Russia must "strive to demilitarize and denazify Ukraine."

Putin's statement is a propaganda narrative that lacks any basis. Putin uses the term denazification, which refers to the Allies' policy for Nazi Germany after World War II. They wanted to rid the country of Nazi influences and remove incriminated individuals from their posts.

However, the comparison with Ukraine is wrong, Andreas Umland, an analyst at the Stockholm Center for Eastern European Studies (SCEEUS), told DW: "This talk of Nazism in Ukraine is completely out of place," he said. "The president of Ukraine, Volodymyr Zelenskyy, is a Russian-speaking Jew who won the last presidential election by a huge margin against a non-Jewish Ukrainian candidate."

Reactions from the Jewish community have been swift. The Auschwitz Museum and the US Holocaust Museum condemned Putin's "megalomania" and his exploitation of history for his false narrative.

While there are far-right groups in Ukraine, Umland said, they are relatively weak compared to those in many European countries. "We had a united front of all radical right-wing parties in the last parliamentary elections in 2019 where they won 2.15% of the vote."

Ulrich Schmid, professor for Russian culture and society at the University of St. Gallen in Switzerland, describes Putin's claim as "a perfidious insinuation." It is true that there were individual far-right groups during the Euromaidan protests in 2013 and 2014. Today, however, they play a subordinate role, said Schmid, who researches nationalism in Eastern Europe. "They exist, but in Russia itself there are at least as many far-right groups as in Ukraine."

Right-wing Ukrainian combat units fighting separatists in eastern Ukraine, such as the Azov Regiment, have been criticized in the past. The Azov regiment was founded by a far-right group, but was incorporated into the Interior Ministry's troops, the National Guard, in 2014, Umland said.

After that there was a separation of the movement and the regiment, which still uses right-wing symbols, but can no longer be classified as a right-wing extremist body. Right-wing extremist soldiers were noticed from time to time during training courses for military personnel, but those revelations came to light and caused a scandal, Umland argued.

Claim: Putin referred to the "expansion of the NATO bloc to the east, including moving military infrastructure to Russia's border." NATO, he said. "The war machine is on the move and, I repeat, it is approaching our borders."

What is correct is that since the collapse of the Soviet Union, 14 Eastern European states have joined NATO. Four of them border Russia. Ukraine was given a NATO membership perspective in 2008, but the country's accession has been on hold since then. And as German Chancellor Olaf Scholz, among others, emphasized during his visit to Moscow in mid-February, this is not on the agenda for the foreseeable future.

It is also true that NATO has made logistical preparations in its Eastern European member states, setting up airfields for the rapid reinforcement of troops. However, it did all this after 2014 in response to Russia's annexation of Crimea, which was illegal under international law.

NATO continues to respect the 1997 NATO-Russia Founding Act, which prohibits the additional permanent deployment of substantial combat forces in NATO accession countries. In response to deteriorating East-West relations, NATO began rotating four battalion combat groups in the Baltic states and Poland in 2016. However, these battle groups, totaling 5,000 troops, are far too small to pose a realistic threat to Russia, which has an estimated 850,000 active duty troops.

Outside the alliance, individual NATO member countries cooperate bilaterally. Moscow views the deployment of the Aegis Ashore missile defense systems with great suspicion. The system has already been deployed in Romania with Poland set to follow later this year. They can shoot down cruise missiles that could reach Russia in a short time, as former German army officer Wolfgang Richter told DW.

However, this would not be an unsolvable problem, according to Richter, who now works for the German Institute for International and Security Affairs (SWP), a Berlin-based think tank.

"This could be solved through concrete verification," he said. In other words, Russia could be given the opportunity to verify that there are no cruise missiles waiting to be launched in the Aegis Ashore silos. But Russia refused the offer to discuss arms control, Richter said: "Moscow chose war instead of a possible negotiated solution."

Is Russia's attack a defense case under the UN Charter?

Claim: "We have simply been left with no other option to defend Russia and our people than the one we must resort to today," Putin said. "The Donetsk and Luhansk People's Republics have asked Russia for help. In this context, in accordance with Chapter 7, Article 51 of the United Nations Charter (...) I made the decision to conduct a special military operation."

It is neither true that Russia must "defend itself" against Ukraine, nor is the United Nations Charter applicable here. This is part of Putin's narrative accusing Ukraine of conducting military operations and even preparing for war against Russia.

Shortly after Russia recognized the Donetsk and Luhansk People's Republics, they asked for help and Putin sent — in his words — "peacekeepers" to the separatist areas. De facto, however, this is a continuation of a creeping occupation that began in 2014. Russia has so far failed to provide any evidence that Ukraine attacked Russia, nor is there any independent information to that effect. In addition, there have been false flag actions — that is, faked attacks — which online investigators have exposed as staged in the separatist areas in eastern Ukraine. (Warning: disturbing images in blog post).

"The right to self-defense pre-supposes an attack by the other side. That is not apparent at all in the case of Ukraine," said Pia Fuhrhop, a researcher at SWP. "On the contrary, Ukraine has done everything in recent weeks to offer Russia precisely no pretext to claim a right to self-defense," she said.

Article 51 of the UN Charter guarantees UN member states the right to "individual or collective self defense" in the event of an armed attack. But this case does not exist with regard to Russia, said Marcelo Kohen, professor of international law at the Graduate Institute of International and Development Studies in Geneva.

"Putin's argumentation is baseless for several reasons," Kohen told DW. Firstly, he said, the two breakaway territories are not states under international law. Secondly, Ukraine had "not been acting violently" against the two territories prior to the invasion. "And thirdly, the massive use of force against military installations throughout Ukraine is unnecessary and disproportionate."

The Organization for Security and Cooperation in Europe (OSCE) has also condemned the Russian attack as a fundamental breach of the UN Charter.

Was there a 'genocide' in Ukraine?

Claim: The goal of Putin's so-called special military operation is "to protect people who have been subjected to mistreatment and genocide for eight years."

The term "genocide" is defined by the 1948 UN Genocide Convention as a "crime of deliberate extermination of a national, ethnic, religious group or members of a race."

There have been no reports of such targeted mass killings of civilians in Ukraine. All civilian casualties in the conflict, attributed to the fighting or the aftermath, have been meticulously documented by international observers since 2014. The OSCE Observer Mission, which has been traveling on both sides of the "line of contact" in eastern Ukraine since 2014, with Russia's approval, has found no evidence of any systematic killing of civilians. According to the UN High Commissioner for Human Rights' 2021 data, a total of approximately 3,000 civilians have died in the war zone in eastern Ukraine.

Most of those deaths occurred early on in the fighting but casualty numbers have been dropping since 2016. The latest available summary report from the OSCE's 2020 Monitoring Mission recorded 161 civilian deaths from January 1, 2017, to mid-September 2020 with similar numbers of casualties on both sides. The overwhelming cause of death was artillery fire, followed by landmine and munitions explosions.

"In the authoritarian system that Russia is today, there is no chance for critical media to somehow verify this. In this respect, justifying war without any factual background is enough for him," she said.

This piece was originally written in German.

Twenty years ago, Ukraine gave up its nuclear weapons in exchange for security guarantees from Russia and the West. Today Kyiv feels betrayed - and not merely by Moscow.

As US intelligence agencies sound the alarm, Germany has called on its citizens to leave Ukraine. German Chancellor Olaf Scholz is set to travel to Kyiv and Moscow this week, hoping for a de-escalation.

Thousands of Ukrainians have been killed in Russian rocket attacks since February 24. Still, Vladimir Putin claims his soldiers don't attack civilian targets. The facts show quite the opposite.

A nuclear threat from Ukraine? A Ukrainian invasion of Crimea? Ukrainian neo-Nazis? Russian President Vladimir Putin's May 9 speech contained new and familiar accusations amid the war in Ukraine. Most of them are false.