Many view the demonstrations, some in the form of vehicle convoys, as support for Moscow's invasion of Ukraine. But organizers say their goal is to highlight discrimination against Russians in Germany. 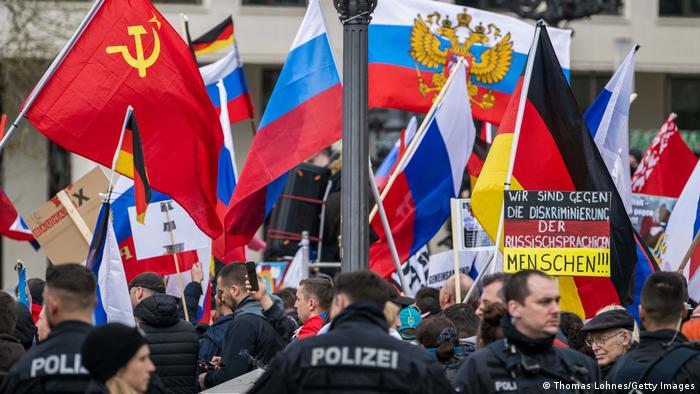 Several hundred people took part in Sunday's protest in Frankfurt, after similar rallies in other German cities a day earlier

Pro-Russia protesters rallied for a second day in Germany on Sunday, demanding an end to discrimination against the country's large Russian-speaking population since the conflict in Ukraine erupted.

Around 600 people marched in the financial hub, Frankfurt, with many waving Russian flags.

A similar-sized demo took place in the northern city of Hanover, police said, accompanied by a convoy of 350 cars.

However, the start was delayed because authorities ruled that the vehicles' bonnets could not be covered by flags.

Organizers said that they wanted to put a spotlight on the growing intolerance toward Russians living in Germany.

However, many observers have questioned whether the protests are not thinly
disguised shows of support for the war, and both rallies were met by counter-demonstrations in support of Ukraine.

One convoy with about 190 cars drove through the southwestern city of Stuttgart, with the motto "Against Discrimination Against Russian-speaking People."

City officials had warned participants beforehand that the event could not show support for the conflict, including the display of the letters V and Z, which have become associated with the Russian invasion.

The pro-Russia demos have sparked a backlash, with many seeing them as a show of support for the Kremlin.

The demo, billed as apolitical, was held on the same day that revelations of the alleged Russian atrocities in the Ukrainian town of Bucha came to light.

"For heaven's sake, how could you allow this convoy of shame in the middle of Berlin?" the Ukrainian ambassador to Germany, Andrij Melnyk, asked Berlin mayor Franziska Giffey.

Giffey replied that she understood his anger but could not penalize people for merely waving Russian flags.

Since Russia began its invasion of Ukraine in February, German authorities have registered 383 anti-Russian and 181 anti-Ukrainian crimes.

Germany is home to around 1.2 million Russians and 325,000 Ukrainians, plus more than 316,000 who have arrived as refugees since the start of the conflict.

Russia invades Ukraine: What you need to know

Casualties, shelling, Russian tanks and emergency meetings to coordinate the West's response. DW has an overview as a Russian war on Ukraine unfolds.

Tens of thousands in Berlin demonstrate for peace