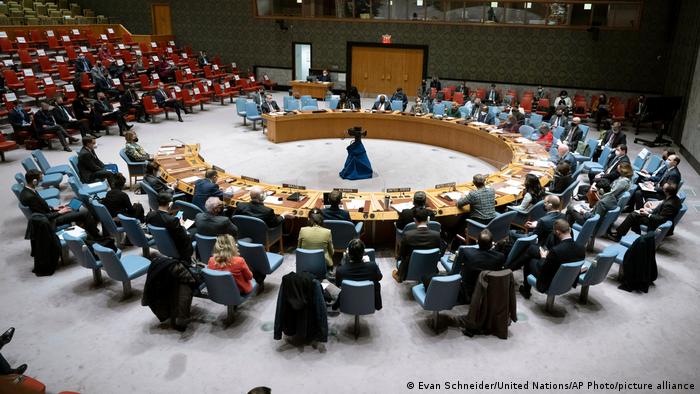 At an emergency meeting in New York, the US ambassador to the UN, Linda Thomas-Greenfield, said that Russia's "attack" on Ukraine "is unprovoked and violates international law."

Thomas-Greenfield shot back against Putin's claim that the troops were on a "peacekeeping" mission.

"He calls them peacekeepers. This is nonsense. We know what they really are," Thomas-Greenfield said.

"The consequences of Russia's actions will be dire, across Ukraine, Europe and the globe," she said.

The US envoy still insisted on a diplomatic path. "We continue to believe that the diplomatic table is the only place where responsible nations resolve their differences."

As the world reacted to Putin's announcement, top diplomats of EU members states are set to meet Tuesday in Brussels to discuss possible sanctions against Russia, while the EU's foreign policy chief Josep Borrell said sanctions would be imposed in the afternoon.

Ukraine: 'We are not afraid'

"The internationally recognized borders of Ukraine have been and will remain unchangeable regardless of any statements and actions by the Russian Federation," Kyslytsya told the chamber.

"We are on our land and we are not afraid of anything or anyone," he added.

As the world reacted to Putin's announcement, top diplomats of EU members states are set to meet Tuesday in Brussels to discuss possible sanctions against Russia, while the EU's foreign policy chief Josep Borrell said sanctions would be imposed in the afternoon.

DW correspondent in Kyiv, Nick Connolly, reported that while tensions were building, Russia's move to recognize Luhansk and Donetsk was still surprising to people on the ground.

"There's just a lot of shock here in Ukraine at Vladimir Putin's extraordinary speech yesterday full of grievances, historical grievance," Connolly said, adding that no one was really expecting Russia's recognition of the two separatist regions.

Connolly reported that many in Ukraine now await Russia's move, whether it will incorporate the territories within their separatist borders or the wider borders they claim, which are under Ukranian control and could spark a wider conflict.

German Chancellor Olaf Scholz halted the Nord Stream 2 pipeline project, saying it was only one "concrete" step and that further sanctions could follow, in reaction to Russia's recognition of the two separatist regions in Ukraine.

Scholz said that he was cofident that the EU would agree to a "robust and massive" sanctions package to levy against Russia.

Earlier, Germany's UN ambassador Antje Leendertse said in the meeting that Russia has revealed its true intentions, with its order to deploy troops to eastern Ukraine's separatist-held regions.

"Russia has repeatedly insisted that it was not party to the Ukrainian conflict. Today it unmasked itself and shows that it always has been," Leendertse told the Council.

"Even during the most difficult moments... we say: we are ready for negotiations," foreign ministry spokeswoman Maria Zakharova said in remarks aired on YouTube.

But Blinken condemned Russia's actions in a tweet, after speaking with Ukraine's Foreign Minister, Dmitro Kuleba.

"Russia’s move to recognize the “independence” of so-called republics controlled by its own proxies is a predictable, shameful act. We condemn them in the strongest possible terms," Blinken wrote.

Chinese Foreign Minister Wang Yi said on Tuesday that he had held a call with Blinken, where he repeated his country's position urging all parties to show restraint and to resolve differences through dialogue.

"The situation in Ukraine is worsening," Wang told Blinken.

Meanwhile, Turkey, which has close relations with both Russia and Ukraine, criticized Moscow's recognition of the two separatist regions, describing it as a "clear violation of Ukraine's political unity, sovereignty and territorial integrity.''

"We invite the parties concerned to act with common sense and comply with the international law," he added.

"Those actions are unacceptable, and we express our strong condemnation,'' Kishida told reporters Tuesday. "Japan is watching the development with grave concern,'' he added.

"A military clash against the wishes of the international community ... would bring huge ramifications in the politics and economies of not only Europe, but to the whole world,'' he added.

Moon instructed his officials to prepare for the economic fallout in South Korea if the Ukraine crisis worsens and US-backed nations levy stringent economic sanctions on Russia.

The Syrian regime became one of the lone voices internationally to openly back Russia's support for the two separatist regions.

"Syria supports President Putin's decision to recognize the republics of Luhansk and Donetsk and will cooperate with them," the state-run Syrian News Agency (SANA) reported, quoting the country's foreign minister, Faisal Mikdad.

"What the West is doing against Russia today is similar to what it did against Syria during the terrorist war," he was quoted as saying.

Russia has been a main ally of Syrian President Bashar Assad since war broke out there in 2011.