Spain and Great Britain are stalling on the German-orchestrated buyout of Opel, putting the deal's future in doubt. A German car expert has told DW there's no time left to arrange a new deal before Opel goes bust. 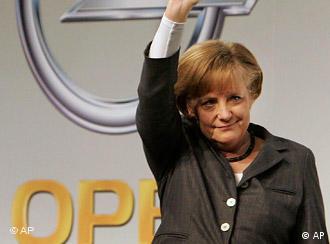 Angela Merkel's involvement in the Opel buyout could turn sour

Spain's Industry Minister Miguel Sebastian, on a visit to Berlin to discuss the future of Opel, has made it clear that his country will not commit to helping the Magna buyout under the current terms.

"We are not in the right place, to discuss the exact share of state aid that the Spanish government might offer," Sebastian said, after opting out of a special meeting in Berlin designed to address the rescue plan.

Spain is calling for Magna to guarantee the future of the Opel factory in Figueruelas, near Zaragoza before it commits to helping the Canadian car parts maker and its Russian backers take command of Opel from former parent company General Motors. 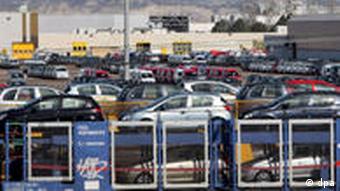 So far, Magna has only made such promises to German Opel factories, and has announced plans to cull around 10,000 jobs across Europe in a bid to restore Opel's profitability. Countries like Belgium, Great Britain, and Spain are worried that their Opel factories - and their economies, by extension - will suffer the job cuts, and are therefore unwilling to help Berlin push through the Opel deal.

The UK government is watching ongoing negotiations between Magna and British trade unions about the future of Vauxhall (the British badge for Opel) factories, saying that these are yet to produce "satisfactory results." British Secretary of State for Business, Peter Mandelson, called for changes to Magna's business plan in an interview with the Daily Telegraph newspaper, so as to avoid what he described as "negative consequences" for Opel's Vauxhall arm.

Speed of the essence?

German auto industry expert Ferdinand Dudenhoeffer believes that there is no time to re-evaluate the Magna buyout of Opel, saying the bid is Opel's only possible solution.

"It makes absolutely no sense to continue with General Motors, because the employees don't want that and it was unsuccessful over the last 15 to 20 years," Dudenhoeffer says. "If they go out and search for a new investor now, they will need at least 12 months to broker a new deal. And in that time, Opel will fall into bankruptcy."

Magna needs 4.5 billion Euros in state aid to complete its buyout, and wants to finalize the takeover deal with current Opel owners General Motors in the coming week. However, with European governments still wrangling over who should pay what, and the deal under European Union scrutiny to see if it is anti-competitive, this target is looking increasingly optimistic. 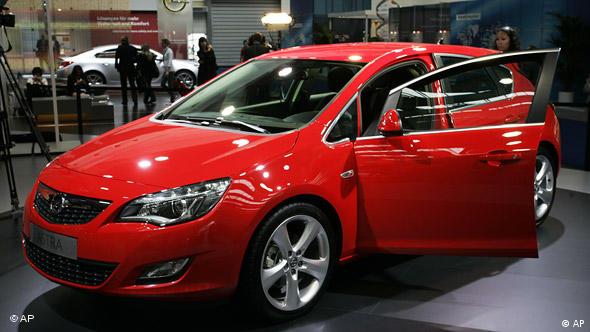 Dudenhoeffer says that German industry experts are baffled by the stance that Spain and the UK are now taking with regard to the Opel takeover.

"They had all this time in the last four months to initiate discussion on the Opel deal," he says. "They rejected, they didn't provide any money, and now they want to stop the deal and put the Opel factories - and the brand itself - in jeopardy."

Magna bosses will have another chance to woo the Spanish government on Tuesday at a meeting in Madrid.

"We expect clear progress to come out of this meeting," industry minister Miguel Sebastian said in Berlin. 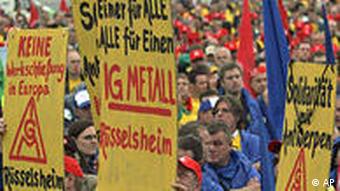 Protestors in Antwerp may need to take to the streets again, the city's Opel factory is still in danger

Spain is concerned that Magna plans to move the production of the Opel Corsa from the Figueruelas factory to Eisenach in Germany. Sebastian met with his German counterpart Karl-Theodor zu Guttenberg in Berlin on Friday, rather than attending the Magna discussions.

Representatives from Germany, Great Britain, Belgium, Austria, Hungary, Poland and the European Commission were present at the official meeting.

The future of Opel was a major issue during Germany's election campaign, and the Social Democrats have already seen the opportunity to capitalize, should the deal now fail.

The SPD state premier for Rheinland Palatinate, Kurt Beck, has already bemoaned the "alarming signals coming out of Berlin" on the future of Opel.

"Thousands of jobs are at stake - within Opel, and at Opel's suppliers."

Roughly half of General Motors Europe's 54,000-plus employees are based in Germany.

Spain is calling on Brussels to intervene in the restructuring of General Motors' European unit Opel amid fears that a politicized carve-up may lead to mass layoffs in car plants across the continent. (28.09.2009)

Germany has come under fire over its state aid to Opel at an EU meeting in Brussels. However, Germany's Economics Minister Karl-Theodor zu Guttenberg insists Berlin will seek a "good European solution" to the deal. (24.09.2009)

Belgian and German Opel workers come together in solidarity

Opel workers from Bochum have joined their counterparts in Antwerp to protest against the threatened closure of the carmaker's plant in Belgium. (23.09.2009)