Facing the harsh realities of global markets, Buenos Aires and Ankara have taken different paths to drive their domestic agendas. But, as global contagion fears recede, will Turkey follow Argentina and take its medicine? 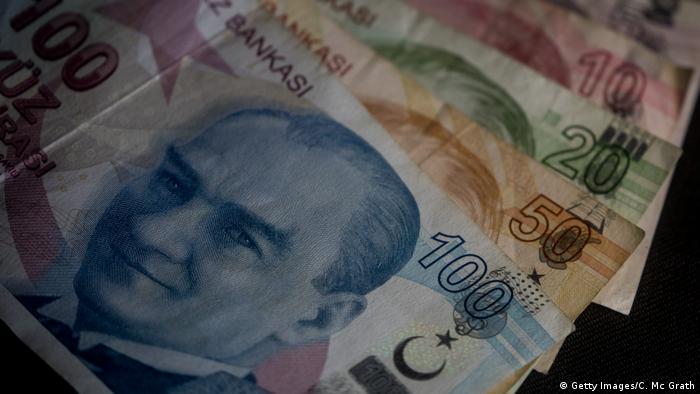 If you want to believe current market players, a repetition of the Asian financial crisis, which spread from Thailand's currency collapse in 1997, seems unlikely.

Linda Yueh, economist and author of "The Great Economists," for example, told DW that better-performing Emerging Market (EM) economies would "aim to show that they should be treated individually and this will limit contagion."

Economists like Yueh point in particular to reduced fears of contagion spreading from the ongoing currency crises in Argentina, India, but especially Turkey, as the dollar's recent upward drive slowed this week.

The Mexican peso, for example, was the biggest gainer among emerging market currencies after the US and Mexico agreed to rethink key parts of NAFTA, while the Polish zloty was up 0.9 percent against the US dollar, the Czech koruna was up 0.8 percent and the Hungarian forint rose 0.8 percent, alongside the Brazilian real.

This uptick among some of the EMs was in some part due to US President Donald Trump's slamming of the US Federal Reserve's decision to raise interest rates last week and a subsequent dovish speech by Fed chairman Jay Powell to central bankers at their Jackson Hole annual gathering in the United States.

But even this didn't help the ailing Turkish lira, which fell another 2.7 percent against the dollar and has plummeted 40 percent in recent months. The Argentine peso and Indian rupee also resumed their slide, hitting record lows as international capital flooded back into the US and out of relatively risky assets.

This in turn triggered currency falls in other EMs, such as Russia, South Africa and Indonesia, the latter two struggling with high capital account deficits.

But while Argentina moved fast to raise interest rates to a staggering 60 percent on Thursday, and bringing in the International Monetary Fund (IMF), Turkey didn't. Finance Minister Berat Albayrak in fact said this week he did not see a big risk to the economy or financial system.

And the markets smelled blood. "Turkey needs shock therapy like Argentina did: A massive rate hike, improvement in policymaking, an IMF program. But more pain is needed to get Turkish policymakers to act," Win Thin, Global Head of Emerging Markets at Brown Brothers Harriman in New York, told DW.

"Although, one should note that the Argentinian currency continues to weaken despite Argentine policymakers doing all the right things," he warned.

Will the Argentine peso go the way of the Turkish lira?

Will the Argentine peso go the way of the Turkish lira?

Turkey's currency has come under pressure amid concern over its banking sector, President Tayyip Erdogan's non-market-friendly policies and worsening diplomatic ties with the US.

The country is particularly vulnerable because of its high level of external debt. Its total debt-to-GDP is below the emerging market average, but Ankara is heavily dependent on foreign capital with 70 percent of its debt denominated in dollars and euros, compared to a 35 percent average for emerging markets.

Most lending to Turkey is from European banks, with the most exposed being Spain's BBVA, Italy's UniCredit, France's BNP Paribas and Holland's ING. Spanish banks' exposure to Turkish debt is equivalent to about 6 percent of Spanish GDP, while the exposure of Italian and French banks is limited and that of Britain and the US negligible.

Its current account deficit is almost at 6 percent of GDP and is one of the largest amongst emerging market countries. This makes it vulnerable to a shock if foreign investors pull out.

"Our EM currency volatility index shows that volatility is close to several year highs," Esther Reichelt, a forex strategist at Commerzbank in Frankfurt, told DW. "We are not surprised as none of the underlying causes of the lira crisis have been tackled. The Turkish government has instead tried to restrict capital flows, which can only dampen the underlying market pressures."

The continuing depreciation trend will fuel into higher inflation, she continues, which further reduces the purchasing power of the lira, resulting in additional depreciation pressure as long as the central bank does not react with decisive interest rate hikes.

"These would also be necessary to establish attractive financing conditions in order to ensure that international investors are willing to finance the huge Turkish current account deficit," she added.

The falling lira puts added pressure especially on Turkish companies with unhedged dollar- and euro-denominated debt and raises fears Ankara will fail to meet its external financing needs. Over the next year, about $77 billion (€65 billion) in foreign currency bonds and loans, 41 percent of total market funding, needs to be refinanced, ratings agency Moody's said, as it downgraded 20 Turkish banks this week due to market funding risks.

Much of the concern is indeed focused on domestic banks, which have increasingly used foreign markets to finance domestic lending. About a third of bank lending is in foreign currencies, mostly to companies.

Compunding Turkey's woes are falls in consumer and businesses confidence, leading analysts at Capital Economics  to suggest that the country's economy is already in a "steep recession."

Investors are now eagerly watching fresh inflation figures, due to be released next Monday, which are expected to rise again after hitting almost 16 percent in July.

In August, concerns about Turkey began to feed into global market sentiment, boosting safe-haven demand for Swiss francs and government bonds in developed markets, while the fall in the lira led traders to shy away from sovereign debt on Europe's periphery, including Portugal and Greece, over fears that its banks may be over-exposed to Turkish assets.

But most observers don't see a strong threat of contagion. "I downplay the notion of contagion," Harriman's Win Thin told DW. "Rather, emerging markets are suffering from deteriorating global conditions and there will be good stories along with the bad," noting what he called "idiosyncratic risks."

Commerzbank's Esther Reichelt agrees, argueing that in most other Emerging Markets' central banks have established "a strong credibility" with respect to their stabilizing monetary policies. "The South African central bank has already signaled it is willing to hike interest rates if the rand's depreciation increases inflationary pressure and the Indian central bank has already hiked pre-emptively. A credible and stabilizing monetary policy is the most important difference to Turkey."

In the opinion of Antoine Bouvet, Vice President of Rates Strategy at Mizuho International in London, EM economies are still "sensitive to the monetary conditions prevailing in US dollar markets," which is why rate decisions by the US Federal Reserve (Fed) are all-important.

"At the moment, the Fed is increasing rates and reducing the amount of dollar liquidity available so this tends to depreciate Emerging Market currencies as a result," he told DW. "Emerging Market economies are more vulnerable than others, for example because their domestic monetary policy has been set too loose for too long, so inflation has run out of control and confidence in the currency has weakened, he said, adding that this was the case in Turkey.

On balance, most experts agree that potential contagion signals can be managed better than during the 1997 Asian financial crisis because major improvements have been made across Emerging Markets, such as higher foreign currency reserves, flexible exchange rates and lower inflation.

Turkish inflation data come out on Monday and the next central bank meeting is on September 13. Esther Reichelt thinks that EM currencies will remain under pressure until then. "Unfortunately, we consider it highly unlikely that the Turkish central bank will take decisive steps to re-establish investor confidence and hence remain pessimistic with respect to the Turkish lira," she said.

Others believe that the longer the impasse in Turkey continues, the more the risk of financial contagion rises. "Investors might become more indiscriminate in their disinvestment of Emerging Market countries," Bouvet fears. He hopes that the "relatively small weight of these countries" will prevent the spread of their problems to the global economy.

"We would need the contagion to spread to large economies like China for it to become a global crisis, and so far authorities there have proved quite reactive after the 2015-16 scare," he concludes.

Germany's Social Democrats suggested the government in Berlin should use taxpayers' money to help Turkey. Reactions to that proposal have been negative here, and DW's Henrik Böhme says Turkey can only help itself. (22.08.2018)

The central bank said it will "provide all the liquidity the banks need" as the Turkish lira continues to tumble. Prosecutors have meanwhile threatened to go after those who "threaten economic security." (13.08.2018)

Germany is to remain under lockdown until at least February 14. Chancellor Angela Merkel and state premiers also agreed to mandate medical masks, rather than simple cotton ones, on public transport and in stores.