US and Mexico agree on NAFTA revamp, Canada ′encouraged′ | Business| Economy and finance news from a German perspective | DW | 27.08.2018

US and Mexico agree on NAFTA revamp, Canada 'encouraged'

US President Donald Trump has announced a breakthrough in talks on a new trade pact with Mexico, saying he hoped the "really good deal" would be joined by third NAFTA member Canada, which didn't take part in the talks. 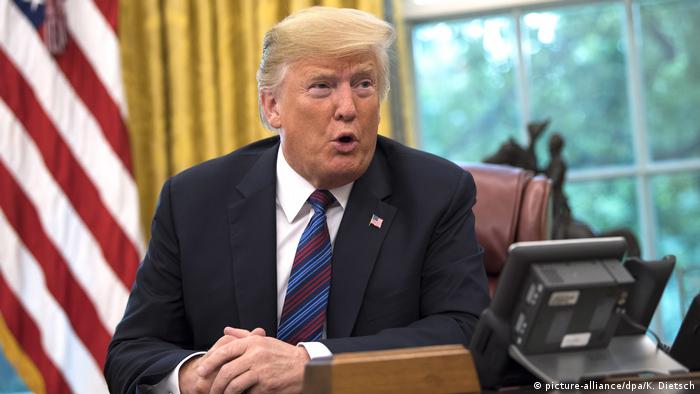 Following a final round of talks at the weekend, a tentative deal on crucial changes to the former North American Free Trade Agreement (NAFTA) has apparently been reached by US and Mexican negotiators.

President Donald Trump said Monday that the two sides had made the trade pact "much simpler," and that Canada was expected to join the talks in the coming days in order to reach a package for all NAFTA parties.

But Trump also said that he wanted the name of the 25-year-old treaty to be changed because it had "negative connotations," and admitted that talks with Canada might not be easy.

"With Canada, we will start negotiations shortly. We could have a separate deal or we could put it in the same deal," Trump said.

In his election campaign, the US president promised to redraft NAFTA or withdraw from the 1994 trade agreement. He described the trilateral pact as a disaster, blaming it for massive jobs losses in the US manufacturing sector.

US Trade Representative Robert Lighthizer and Mexican Economy Minister Ildefonso Guarjardo have been working for weeks to iron out differences including rules for the auto industry.

Talks ground to a halt in May, in part due to the July 1 presidential elections in Mexico. Canada was left out of the talks, waiting to rejoin negotiations later.

A key element of the US-Mexico talks has been content requirements for autos. The two sides agreed to stricter rules for Mexican car exports to the US, including requirements that 75 percent of the content be made in North America, and that 40 to 45 percent of the content be made with workers earning at least $16 (€13.7) per hour — a measure aimed at discouraging manufacturers from relocating to lower-wage Mexico.

The deal maintains tariff-free trade for farm products, but with new measures on labelling and health standards. It also maintains the existing investor dispute settlement regime for the energy and telecoms sectors.

"We think this is going to lead to more trade, not less trade," said Robert Lighthizer.

Despite the apparent breakthrough on those subjects, a deal with Canada is far from certain. Among the controversial issues to be discussed with Ottawa is a "sunset clause" that Trump wanted, and which would impose a review of the deal every five years. Moreover, the US might first have to drop its higher tariffs on steel and aluminum imposed on Canada and Mexico earlier this year.

Immediately after the agreement was reached on Monday, Mexican President Enrique Pena Nieto spoke to Canadian Prime Minister Justin Trudeau and urged him to rapidly rejoin the talks.

"I expressed the importance of them reentering the process with the goal of concluding an agreement this very week," Pena Nieto said on Twitter.

A spokesman for Chrystia Freeland, Canada's foreign minister, said Canada was "encouraged" by the "optimism" shown by the US and Mexico, but cautioned that a full NAFTA deal was not a foregone conclusion.

"We will only sign a new NAFTA that is good for Canada and good for the middle class. Canada's signature is required," he said.

Shortly after news of the revamped trade accord broke, Freeland's office announced she was cutting short her diplomatic trip to Europe to fly to Washington and resume trade talks with the US on Tuesday.

Even if Canada agrees to the NAFTA revamp, the trade pact still needs the approval of all three countries' legislatures. The US Congress is likely to be the first to vote on it in a session after the midterm elections in November — or next year, when it is possible that a Democratic majority will hold the reins of power. And Mexican negotiators are keen to seal a new deal before Pena Nieto hands power to President-elect Andres Manuel Lopez Obrador on December 1.