Turkey's Erdogan has said there is "no problem" with the EU and Germany after a rough-and-tumble year. He also commended EU countries for their stance against the US decision on Jerusalem. 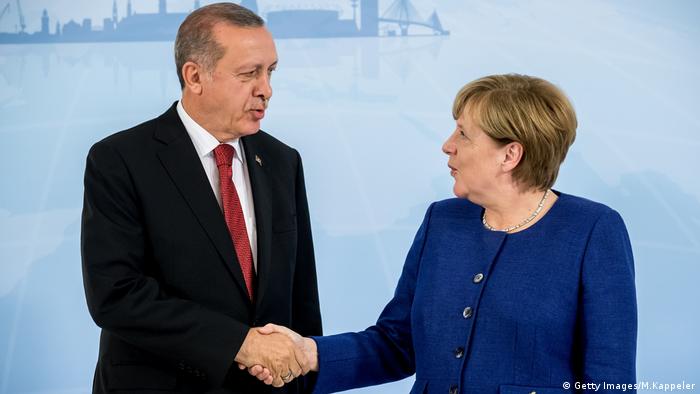 Turkish President Recep Tayyip Erdogan has expressed hope for good relations with the European Union and Germany, after a year of tense relations between Berlin and Ankara.

"We certainly desire good relations with the EU and EU countries," Erdogan told journalists aboard a flight back from a four-day trip to Sudan, Chad and Tunisia.

Ties between the Brussels and Ankara have steadily deteriorated over the past two years, with Turkey's EU accession process all but halted over deteriorating human rights and rule of law.

Turkey and Germany careened from crisis to crisis in 2017 as relations hit rock bottom over a series of issues.

"There is an expression that I always use. We need to reduce our enemies and increase our friends," Erdogan said.

"We don't have a problem with Germany, the Netherlands or Belgium. It's exactly the opposite, the leaders of those countries are old friends of mine," Erdogan said. "They did some wrong things to me, but that's a different matter."

Tensions between Berlin and Ankara have eased somewhat recently after the release from prison of a number of German nationals. But relations are still plagued by a war of words earlier this year and serious disputes, including the continued detention of Die Welt correspondent Deniz Yücel on trumped-up terrorism charges in Turkey.

Erdogan said that he may visit Germany, the Netherlands, France and the Vatican.

Erdogan said there were problems with the Netherlands, Germany and Belgium, but "our last discussions have been quite good."

"On the issue of Jerusalem, I wanted support from them; they are on the same page as we are," Erdogan said, referring to opposition to US President Donald Trump's decision to recognize the contested holy city as the capital of Israel. He said he called German President Frank-Walter Steinmeier recently to thank him.

Erdogan likes to present himself as the Muslim world's chief defender of Palestinian rights and has been leading the charge against the Trump administration's Jerusalem decision.

Erdogan calls on Jerusalem to be recognized as Palestinian capital

He said that after an overwhelming UN General Assembly vote this month against the United States' Jerusalem stance, he hoped to encourage a reversal of policy.

An investigative report links Ankara to a boxing gang in Germany accused of going after opponents of the Turkish government. The report ties a Turkish MP close to President Erdogan to violent criminal activity. (14.12.2017)

Germany's top diplomat Sigmar Gabriel has said a "smart" Brexit deal may serve as a model for relations with other non-EU states. However, the situation in Turkey must improve before it can enjoy closer ties, he said. (26.12.2017)