The Turkish army's attack on the Kurdish YPG militia is creating blowback in Germany and mobilizing diaspora communities. A sustained Turkish intervention in Syria against the Kurds could cause trouble for Germany. 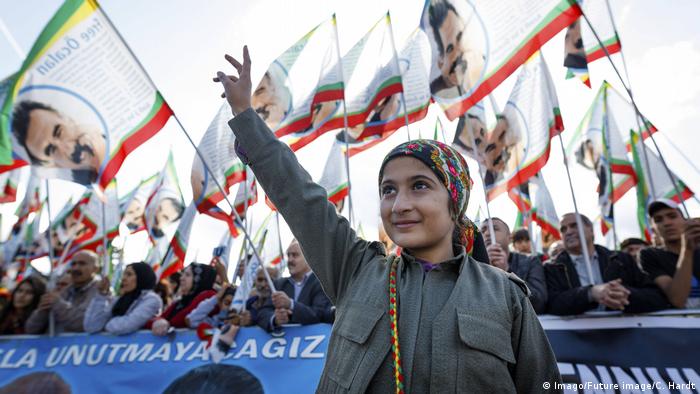 "We are all Afrin, we are all YPG," shout several dozen Kurdish protesters in front of the Russian consulate in the western German city of Bonn, waving flags of the self-declared autonomous region of Syrian Kurdistan.

It's one of dozens of rallies being organized daily across Germany to protest Turkey's military offensive against the People's Protection Units or YPG, a Syrian Kurdish group that controls the Afrin region in northwest Syria.

Evin, one of the protesters in Bonn, said she would take to the streets every day to defend Afrin, and would even allow her children to join the Kurdish nationalist cause. "I am a mother and I wouldn't stop my children from going to the mountains," she said, using the Kurdish euphemism for joining the Kurdistan Workers' Party, or PKK, which has waged an insurgency in Turkey for decades and has been banned in Germany since 1993.

Evin says the Kurdish protesters are not seeking conflict, but she worries that "racist" Turkish nationalists may become violent in response.

In a sign of how quickly things can escalate, Kurdish protesters demonstrating at Hanover's airport on Monday clashed with Turkish passengers exiting their flight. Separately on Monday, unknown assailants vandalized two mosques run by the Turkish-Islamic Union for Religious Affairs (DITIB), Germany's largest Islamic umbrella group with over 900 mosques tied to the Turkish government's Directorate of Religion, or Diyanet.

The incidents come as Der Spiegel reported that some Turkish mosques and imams in Germany invoked prayers for the success of the Turkish military against the "terrorists" in Afrin. The prayers were the same as those read at some 90,000 mosques in Turkey. Germany is home to 3 million people of Turkish origin. About a third are ethnic Kurds who came to work here in the 1960s and 70s, followed by another wave in the 1980s and 90s fleeing conflict and persecution.

German officials have long voiced concern about conflicts between Kurdish nationalists and the Turkish state spilling over into Germany, especially since the breakdown of the peace process between Ankara and the PKK in 2015 sparked an upswing in violence in Turkey.

More recently, Turkish military offensives against Kurdish cities in southeastern Turkey and a crackdown on the legal Kurdish opposition have left Kurdish nationalists with the feeling that they have few options besides the armed PKK movement.

"For the PKK in particular, the past couple of years have been a useful period to rekindle interest and mobilize people in the diaspora around the glorious narrative of victimhood and martyrdom," said Alexander Clarkson, a lecturer for German and European Studies at King's College London who specializes in diaspora communities in Germany.

The Turkish assault on Afrin appears to have been greenlighted by Russia. The United States has urged restraint, given that it has been backing Kurdish YPG militants, who it sees as its main ground allies in the war against the "Islamic State" militant group in Syria. But the US is in a difficult position, since Turkey is a NATO ally. The EU has also been fairly quiet.

"What Afrin does as a next step is, it adds the narrative of betrayal," said Clarkson, adding that this can be used to mobilize the Kurdish diaspora around the idea that the PKK/PYD is the only protector of the Kurdish people.

What remains to be seen is the scale of any counter-mobilization to the Kurds from Erdogan supporters and Turkish nationalists in Germany. Clarkson notes that while many Turkish-Germans may support the Afrin operation because of their opposition to Kurdish nationalism, the Turkish diaspora is composed of several political strands, some of which do not support Erdogan and are well integrated in Germany. Many of them will not want to be played as Erdogan's political tools, he said.

"Erdogan's interference in the Turkish-German diaspora has backfired," he said. "The more the Turkish government tries to exert control the more it alienates people within it."

German government under fire over Leopard tanks in Syria

Germany's government has faced a slew of criticism over German-made tanks that Turkey deployed in its push into Syria. Some politicians have called for an immediate halt to arms exports to Turkey and nixing a key deal. (23.01.2018)

Footballer Deniz Naki said that his car was shot at while driving on a highway in western Germany. Naki, who plays for a Kurdish club and has spoken out against the Turkish government, said he "feared for his life." (08.01.2018)