NATO allies clash as Turkey attacks US-backed Kurds in Syria | Europe | News and current affairs from around the continent | DW | 22.01.2018

Turkey's offensive against US-allied militias in the Afrin region of northern Syria is putting NATO in a difficult position. As tensions between the NATO allies escalate, analysts wonder how far Ankara is prepared to go.

NATO Deputy Secretary General Rose Gottemoeller arrived in Ankara Monday on a long-planned visit that was unrelated to Turkey's current military campaign against a Kurdish enclave in the northwest Syrian region of Afrin. But her trip provoked heightened interest, given that NATO's two largest armies stand on opposite sides in the operation.

Ankara says it wants to clear the Syrian border enclave of Kurdish YPG fighters; it considers YPG units to be allies of the Kurdish insurgents that have fought against the Turkish state for decades. But the YPG has the backing of the United States, which sees the Kurdish militants as its main allies in Syria against the "Islamic State" (IS).

Gottemoeller was briefed by Turkish officials who assured her, as Turkish President Recep Tayyip Erdogan has stated publicly, that the Afrin offensive would be "brief."  NATO officials in Brussels stressed Monday that Gottemoeller was not in Ankara because of the heightened tensions between Turkey and the US, nor would she be playing any kind of mediation role in the dispute.

The NATO deputy chief made no mention of the issue consuming Turkish media in her sole tweet about her Monday engagements in Ankara, which showed her at the mausoleum of Mustafa Kemal Ataturk, the founder of modern Turkey.

But many analysts say the standoff in Afrin is hotter than it looks. The influential Soufan Group, a US-based security intelligence strategy firm, said in its latest brief that the Turkish action is an example of the new coalition between Turkey, Russia and Iran, which are "united in a desire to block US interests in the country." The US will have to back down or ratchet up the conflict with its NATO ally Ankara, the Soufan Group suggests.

Marc Pierini, a visiting scholar at Carnegie Europe, knows Turkey well, having served as the European Union's ambassador there from 2006 to 2011. He told DW the Turkish president appears to be sacrificing what little goodwill there may be remaining in Europe for his own political aims.

"Essentially it's putting Turkey at odds with NATO in terms of how allies operate between themselves," he said. "That's the main effect. But I guess the risk is perfectly understood in Ankara and it's the price to pay to control the political scene."

Flexing military muscle in the assault on the Kurdish YPG fighters in Syria will likely go down well among Turks, Pierini explained. "It helps immensely in ramping up the nationalist narrative at home," he said. Erdogan has created a "huge operation to crush a somewhat small threat" which likely could have been resolved diplomatically, he added. But, sounding a note of warning, Pierini said the problem is that "nobody knows when and where it will end." 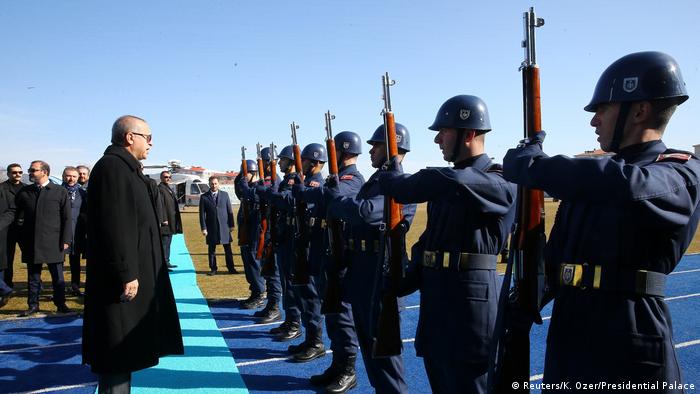 On the diplomatic front, Erdogan has not yet moved beyond calls he made last week for NATO to criticize US support for the Kurdish YPG forces in Syria. He has not instructed his diplomats to reiterate that demand at alliance headquarters, and NATO sources say Turkey has not initiated any briefings on its military action in northern Syria. In New York, the United Nations Security Council on Monday refrained from condemning the offensive or calling for its end. In Brussels, meanwhile, the issue has not been added as a formal agenda item for Wednesday's weekly North Atlantic Council meeting.

Turkish President Recep Tayyip Erdogan has spoken out against the US proposal to arm Kurdish fighters in Syria. His comments came during a brief press conference in the White House. (16.05.2017)