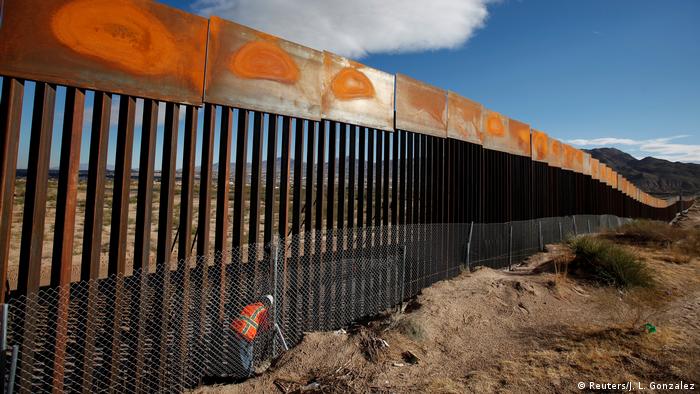 The current barrier, which has been going up gradually since 2007, is not as impenetrable as Trump's planned structure

A potent manifestation of US President Donald Trump's anti-immigration rhetoric, the southern border wall and the battle to pay for it has precipitated a record US government shutdown now in its fourth week. If the president does ultimately find a way to fund his impregnable barrier, one of the big losers will be a rich yet fragile ecosystem.

"The border area is a biodiversity hotspot, it's one of the most biodiverse areas in the world," Jennie Miller, a senior scientist with Washington DC-based non-profit conservation organization Defenders of Wildlife, told DW.

Miller co-authored an October article, "Nature Divided, Scientists United: US-Mexico Border Wall Threatens Biodiversity and Binational Conservation," which details the environmental damage caused by the existing 1000 or so kilometers (621 miles) of barriers —  a sporadic collection of fences, posts and spikes — incrementally constructed along the US-Mexico border since 2007.

The article, which was co-signed by 2,700 scientists from 47 countries, argues that the situation will be exacerbated by Trump's plans for a solid structure.

It's by no means the first attempt to flag up how 3,145 kilometers of hard barricades could negatively affect local flora and fauna.

"Trump's border wall will be a deathblow to already endangered animals on both sides of the U.S.-Mexico border," began a May 2017 survey by the Center for Biological Diversity titled "A Wall in the Wild."

According to Defenders of Wildlife, around 1,500 plant and animal species, including some 60 listed as endangered or vulnerable, are found within the five binational habitat corridors along the southern border. 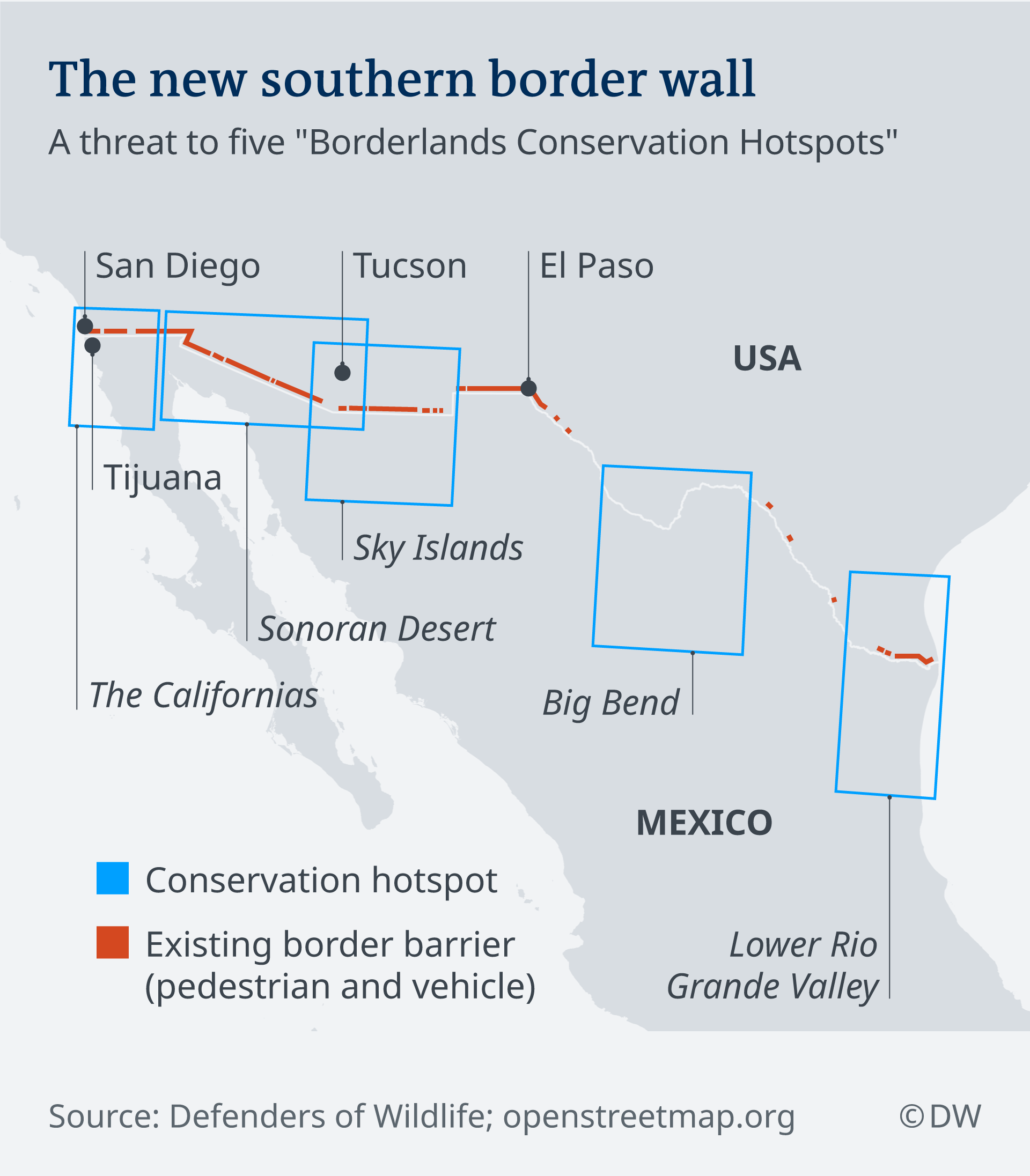 Blocking them off with a towering uninterrupted concrete barrier would, just by way of example, prevent red listed Peninsular bighorn sheep from accessing water and breeding sites between California and Mexico, and stop Mexican gray wolf and endangered Sonoran pronghorn from dispersing across the border to reestablish tattered populations.

Likewise, the National Butterfly Center, a sanctuary for 200 butterfly species in Texas — including the threatened monarch, whose Mexican population has declined nearly 90 percent since 1996 — is in the path of the proposed wall.

Apart from dividing animal populations, the wall also poses a threat to their lives during extreme weather events. "We have observed wildlife deaths as a result of the flooding," said Miller.

Fighting in the courts

Defenders of Wildlife are part of a coalition of conservation groups challenging the government in several lawsuits over its waiving of 28 environmental and public-safety laws — including the Endangered Species Act — to accelerate border wall construction across conservation zones and protected areas.

Although the Supreme Court refused to hear one case towards the end of last year, the plaintiffs say the legal fight is anything but over.

"As this issue continues to be a flashpoint both legally and politically, it will become difficult for the Supreme Court to ignore it," Jason Rylander, Senior Staff Attorney at Defenders of Wildlife, told DW. 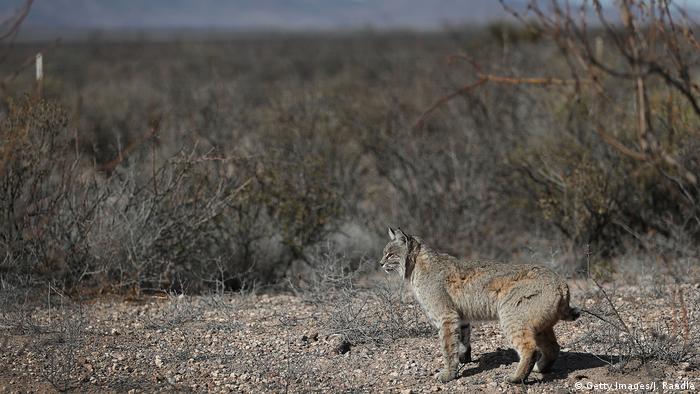 Conservationists and environmentalists in other countries where man-made barriers have been erected offer a sobering insight into the potential impacts of Trump's proposed wall.

Imad Atrash, director of the Palestinian Wildlife Society, has documented loss of biodiversity in the wake of the massive concrete barrier Israel started building as Palestine's Second Intifada against the country began in 2000.

Known by turns as a separation, segregation or apartheid wall, the structure has sliced through the land, destroying, Atrash says, vital nesting and breeding grounds for migration birds like the European honey buzzard, as well as habitat for mammals such as hyenas, foxes and wolves.

"The separation wall or fence between Jerusalem and Bethlehem destroyed all these habitat areas," he told DW.

In the early 2000s, he photographed a red fox digging a tunnel under a section of the barrier between Jerusalem and Bethlehem. He believes the animal was trying to reconnect with its mate.

"This is a real story of the wall separating animal families, the babies or chicks and their parents," he said after a long day in the field educating children about the area's rich but diminishing biodiversity.

Similar stories are being told across Europe, where 1000 kilometers of fencing has been erected in countries such as Hungary, Slovenia and Bulgaria since the start of the so-called migrant crisis in 2015. Designed to prevent people from moving freely, the barricades also block the path of animals.

"The effects of these fences will most likely be felt in the long-term, as they cut off gene-flow between populations and prevent wildlife from responding to changing environmental conditions," John Linnell, an Oslo-based researcher who co-authored a 2016 report on "Border Security Fencing and Wildlife," told DW.

He says large carnivores in the Balkans will be particularly vulnerable, and that one 349 kilometer section of razor wire fencing along the Croatia and Slovenia border has cut off part of the Dinaric Mountain range fragmenting areas inhabitated by three of Europe's five large carnivores, the brown bear, endangered gray wolf and Eurasian lynx.

Like Imad Atrash, who says that the segregation wall in Israel-Palestine must be pulled down if wildlife habitats are to be revived, Linnell argues for greater openness and connectivity in Europe.

"European habitats are very fragmented and the fate of wildlife depends on maintaining and improving the connectivity that we have," he said. This means mirroring the "EU ideals of free movement of people, services and goods."

"Only by working together can European countries achieve their conservation goals," he added.

But as signified by Trump's planned southern border wall, barriers and fences erected in the name of far-right populism are not concerned with inclusion. On the contrary, they're clear cases of every man, woman, child, and even animal, for themselves.

A couple of thousand tigers — many owned as pets — live in Texas. That gives the US state the second-largest population of the endangered species in the world, after India. It's a major challenge for tiger conservation. (28.06.2018)

LA lions to roam over freeway

Planning has started on the largest wildlife crossing in the world. The privately-funded bridge would allow the endangered Santa Monica mountain lion and other species to dodge safely the insanity of LA traffic. (17.01.2017)

Lions: An apex predator under threat

Lions were once found all over Africa, now they prowl the plains and open woodlands of just a few countries. Why are these charismatic animals so threatened? (20.04.2018)