As the US government shutdown reached its 20th day, Trump went to Texas to make his case for building a border wall. He wants $5.7 billion from US funds, and has said he might use emergency powers to finance the project. 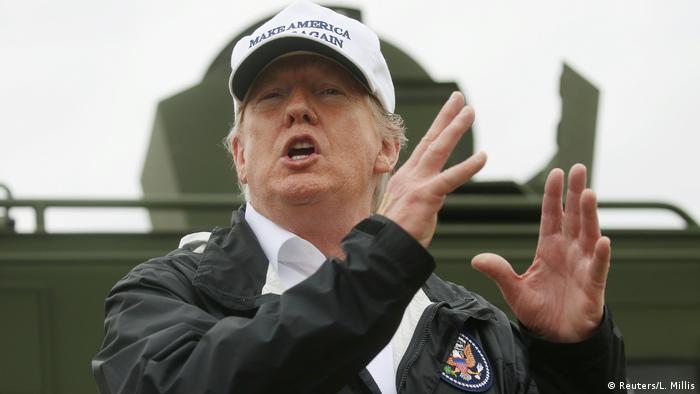 President Donald  Trump said he could use emergency powers to bypass Congress to pay for a wall along the US-Mexico border.

"We can declare a national emergency. We shouldn't have to," Trump told reporters. "This is just common sense."

Trump insists a government funding bill include $5.7 billion (€4.9 billion) to pay for a wall on the border but Congressional Democrats are opposing him.

'Ineffective,' or necessary 'for protection'?

DW's Alexandra von Nahmen was in McAllen, Texas, as Trump visited, speaking to supporters and opponents of the border wall.

"I live about two blocks from where the wall's supposed to be," one man told DW. "It's going to block access to a picnic area, to the National Butterfly Center, to the state park — and that was one of the main reasons why I moved to the valley 10 years ago, to be with the wildlife that's going to be blocked off. The wall's ineffective, we have very good border security now, there are better ways to protect us, but the wall is not going to help."

Meanwhile, wall supporter Hector said it was necessary "for protection, just like we protect our own homes with walls, fences. It's the same thing with the country: there's a lot of drugs, people coming over here, and Mexico wants them here because they send money back to Mexico. We are not a sanctuary country." Retired cop Joe concurred, saying he thought a wall would at least "slow" illegal migration.

The Washington Post suggested the White House was laying the groundwork for declaring an emergency that would let Trump build sections of a wall, possibly using funds from the Army Corps of Engineers. The White House has directed the Corps to review its budget, including $13.9 billion in emergency funds earmarked last year by Congress, to see what money could be diverted to building a wall.

Trump has started to claim that he never said during his election campaign that Mexico would directly pay for the wall: "Obviously, I never said this, and I never meant they're going to write out a check," the president told reporters at the White House on Thursday. "But they are paying for the wall indirectly, many, many times over, by the really great trade deal we just made." 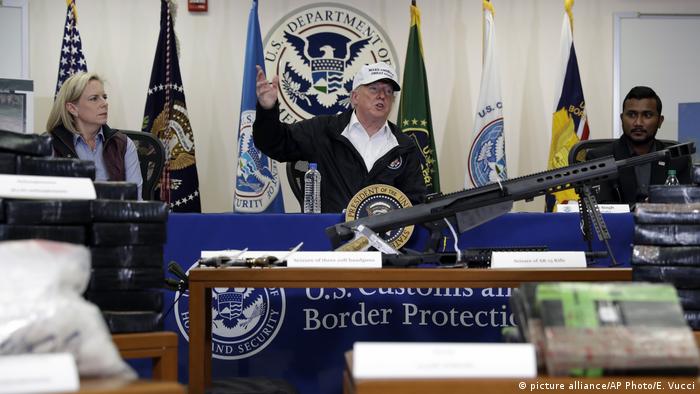 Trump spoke in a room with confiscated arms and drugs

However, the Washington Post wrote that Trump did say Mexico would pay for the wall: "at least 212 times during his campaign and dozens more since he took office."

"I will build a great, great wall on our southern border," he declared on June 16, 2015 at Trump Tower in New York. "And I will have Mexico pay for that wall. Mark my words."

On Thursday, at his press conference in Texas, Trump claimed undocumented immigrants and illegal drugs were streaming across the border. However, statistics show illegal immigration there is at a 20-year low and drug shipments mainly passed through legal ports of entry. 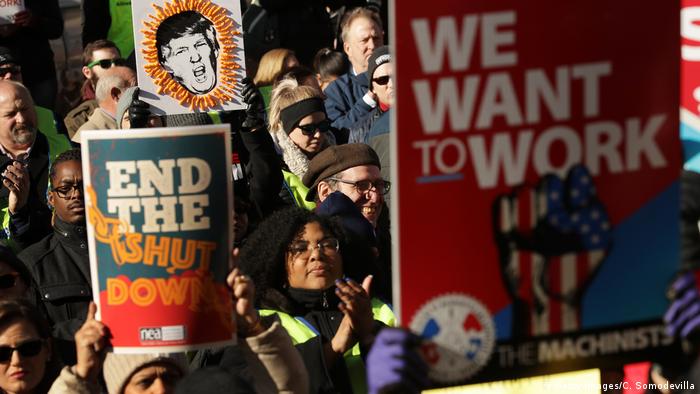 Hundreds of federal workers demonstrate in Washington against the shutdown

Staying home to deal with the shutdown

The impasse between the president and Congress over the funding bill has left hundreds of thousands of federal employees without pay, and a quarter of the federal government closed down.

Trump tweeted that he will not attend the World Economic Forum in Davos, Switzerland, later this month "because of the Democrats' intransigence on border security."

US President Donald Trump has threatened to declare a national emergency to build a border wall if he can't get congressional funding. Democrats said Trump was in need of "an intervention" from Senate Republicans. (05.01.2019)

US President Donald Trump has ordered the deployment of National Guard troops to the Mexican border. Trump has said the situation at the southern border has "now reached a point of crisis." (05.04.2018)