A couple of thousand tigers — many owned as pets — live in Texas. That gives the US state the second-largest population of the endangered species in the world, after India. It's a major challenge for tiger conservation. 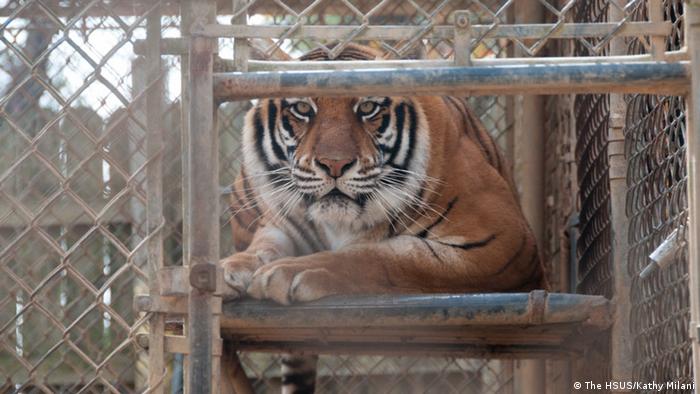 Texas is well-suited to keeping a pet tiger. Its hot climate means a tiger can live outside year round, while the amount of cheap ranching land provides plenty of space for a big cat to roam.

"You're not going to have a tiger in New York as easily," says John Gramieri, general curator at Austin Zoo, which has a 17-year-old Bengal male tiger given to the zoo as a four-month-old cub by a truck driver who bought it just off the highway.

In Texas, it is easier to own a tiger than a dog that's been labeled as dangerous. It's estimated there could be from 2,000 to 5,000 tigers living in this southern state of the United States — meaning Texas could have more tigers than the roughly 3,800 tigers living in the wild globally.

At the heart of Texas' surprising tiger situation is a very American notion of it being an individual's right to own any pet — a right the government should not interfere with.

"You hear the argument: I have a right to own an animal on my property — I have property rights," says Nicole Paquette, vice-president of wildlife protection at the Humane Society of the United States. "People want something unique. They look for the exotic." 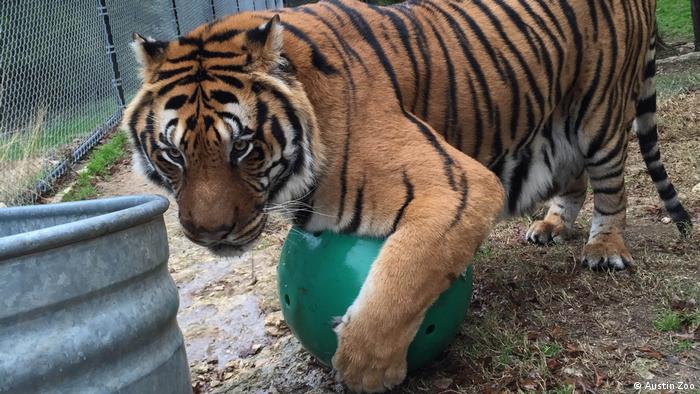 Tigers are the largest feline — of nine subspecies, three have gone extinct, and the remaining six are endangered. In the wild, tigers still prowl far east Russia, northeastern China, Malaysia, Sumatra and India.

Many of Texas' tigers are in zoos and animal sanctuaries. But others are kept as pets in backyards, and usually aren't registered with authorities — making it hard to enforce animal-welfare standards.

"In the wild, a tiger's territory can be 20 square miles [52 square kilometers] or more," Callison says. "If they spend their entire captive lives in a space equivalent to that of a bedroom, the physical and psychological damage is extensive."

At the same time, no one really knows just how many tigers there are in Texas or across the country. Some estimates put the United States tiger population around 7,000, but others say numbers are inflated by animal-welfare activists to raise money. 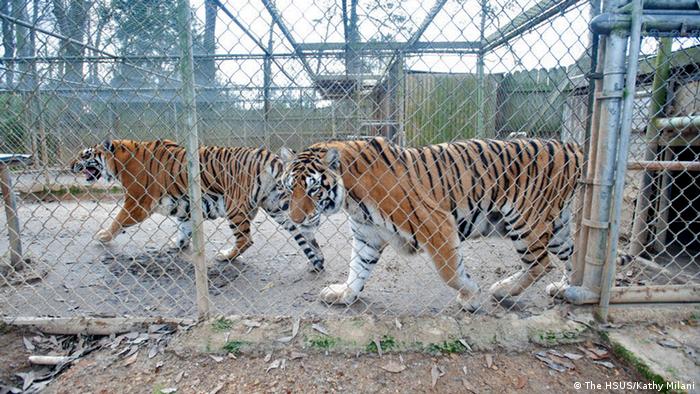 Tigers at a roadside zoo in Texas

"Admittedly, these numbers are estimates," says Pamela Boich with the Texas Human Legislation Network, which lobbies for animal-welfare laws. "But it's enough to make it a problem," she adds.

The United States Endangered Species Act of 1973, designed to protect species from extinction as a consequence of economic growth and development, applies only to animals taken from the wild.

As a result, the regulatory burden for exotic pets typically falls to individual states. And while states have gradually established regulations around exotic pets, too often these prove ineffective, observers say.

In 2001, Texas passed a law requiring owners of exotic pets to register them. But enforcement is left to the state's 254 counties, each of which implements its own measures. This has made it difficult, if not impossible, to track unregistered tigers.

"Owners of tigers don't want their existence known, so neighbors aren't always aware they are living next to one," says Ben Callison, a former animal sanctuary director and long-term animal welfare activist.

"We rescued an abandoned tiger living in a small and flimsy chain-link enclosure in Kansas that law enforcement had no idea existed. Just down the road was a children's daycare."

Texas is well-positioned for cross-border trade in tigers with Mexico, Callison notes. Exotic animal seizures at the border used to be mostly birds and reptiles coming from Mexico — but the trade has reversed, with mostly tigers and cats bred in the US being smuggled into Mexico.

"White tigers are really popular, and so are made to breed as often as possible, even with relatives, leading to birth defects and animals not surviving — it's really horrific." 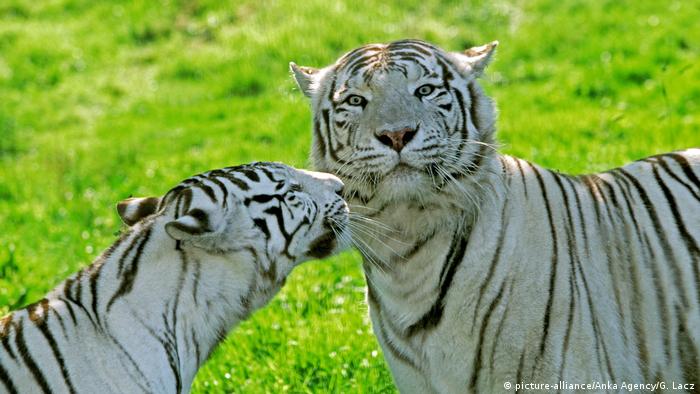 White tigers are a pigment variation of the Bengal subspecies

Another conservation concern is how Texas' backyard tigers can undermine the Convention on International Trade in Endangered Species of Wild Fauna and Flora (CITES), a multilateral treaty to protect endangered plants and animals.

Tiger body parts are highly sought-after in traditional Eastern medicines, which helps fuel the billion-dollar trade in exotic animals. The convention seeks to curtail such trade in vulnerable species.

"China has tiger farms, and pushes back against criticism of these by saying the US has captive tigers," says Leigh Henry, director of wildlife policy with the World Wildlife Fund.

About 30 percent of illegal tiger parts seized comes from farms, Henry explains. Since the world's wild tiger population is so small, such unregulated breeding can push up demand. "That's why we want the US to take a stronger stand," Henry concludes. 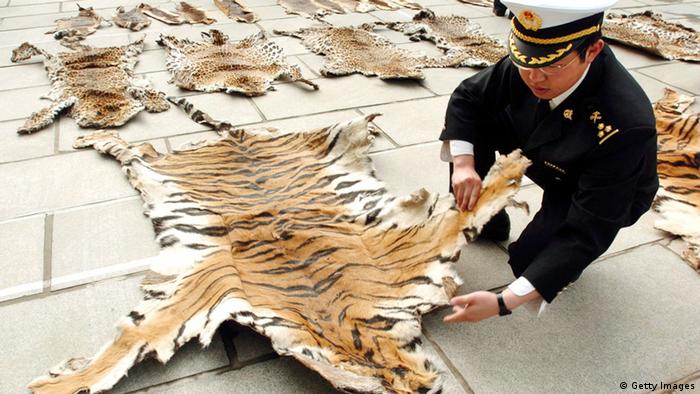 Those lobbying for more regulations in Texas and across the US ultimately want a federal ban on the breeding and new ownership of dangerous animals.

However, that's a hard sell, they say, due to widespread distrust of big government and suspicion that it could eventually lead to stricter restrictions on animal welfare that would impact farmers and the meat industry.

Nevertheless, animal advocates point out that animal welfare in America has come a long way from the 1970s, when animals had very little protection.

"Some people don't want to see any captive wildlife at all — I don't subscribe to that," Boich says. "If animals can't survive in the wild you have to look after them."

"If you let people see them, they can change people's hearts."

Read more: What the Asian tiger teaches us about ourselves

A fresh study by the International Fund for Animal Welfare has highlighted the vast quantity of live animals and their body parts that are available for sale online and the threat this poses to their survival. (23.05.2018)

Bloodhounds and other sniffer dogs have been helping to track down villains for centuries — but when space is tight, Africa's "sniffer rats" could be perfect for the job. (27.03.2018)

When the US announced plans this week to allow the import of elephant trophies, global outrage echoed loud, and President Donald Trump soon put the decision 'on hold'. But are there arguments for controlled slaughter? (17.11.2017)

Not content with a humble hamster or cuddly cat, some opt for a more exotic pet like a snake or monkey. But taking wild animals into your home is rarely a good idea. (29.03.2016)

While some of the world's most iconic species are threatened due mainly to poaching, others have recovered thanks to the efforts of wildlife experts. The World Wildlife Conference could decide the future of some species. (23.09.2016)