Bloodhounds and other sniffer dogs have been helping to track down villains for centuries — but when space is tight, Africa's "sniffer rats" could be perfect for the job. 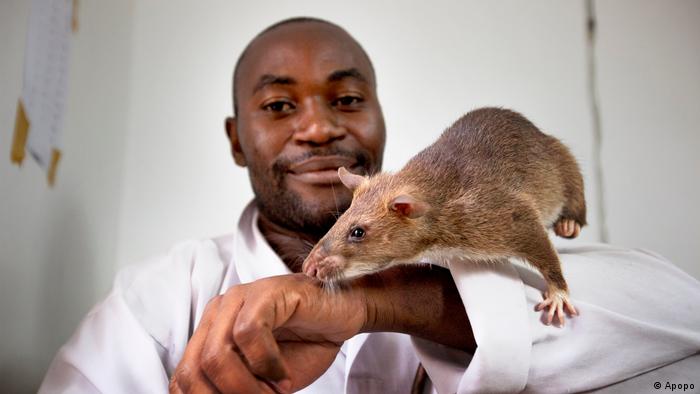 In a boot camp deep inside Tanzania, an elite squad of tiny sniffer troops is being drilled for combat duty against transnational wildlife criminals.

Weighing in at just over a kilogram (2.2 pounds) each, several African Giant Pouched Rats are busy with intensive training in the city of Morogoro, west of Dar es Salaam.

Enticed by bananas, peanut butter and other tasty treats, the rats are being taught to detect the presence of illegal wildlife and timber products hidden in ships and smuggled out of Africa's major ports to customers in Asia, Europe and elsewhere.

Though the rodents may end up with miniaturized GoPro cameras strapped to their heads, their most important weapon was bestowed by nature, in the form of an acute sense of smell. They can be trained to sniff out almost anything, from TNT explosives to early traces of tuberculosis in humans. 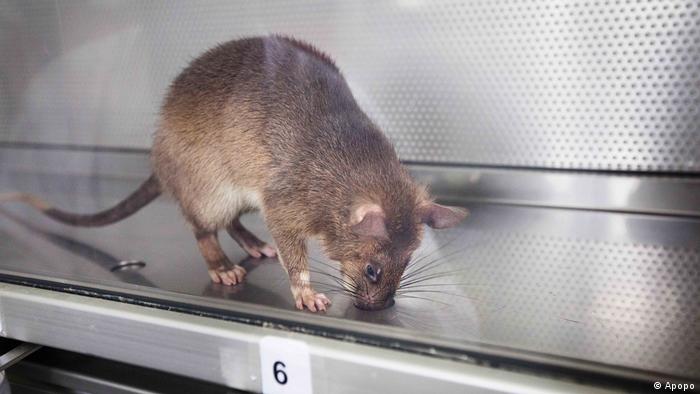 "There is something fishy here guys ...". Julius the sniffer rat indicates that he is on to something.

Their other main advantage is size. Unlike sniffer dogs, African Giant Pouched Rats can squeeze into very tight spaces — such as shipping containers stuffed with illicit hardwood timber, disguised beneath other products to throw customs officers off the scent.

Future sniffer rats could also help to ferret out smuggled rhino horn. Earlier this year, South African Environment Minister Edna Molewa confirmed that more than 1,000 rhinos were killed in South Africa in 2017 — the fifth year in a row that has happened.

In Morogoro, older relatives of the latest rat recruits have already proved their worth sniffing out abandoned landmines, as well as cases of human tuberculosis in a project pioneered by the Belgian non-profit organization Apopo.

Now the project is diversifying to see if the rats can be used to curb the multi-billion dollar flow of animals and plants by transnational crime syndicates.

Just over a year ago, the South Africa-based Endangered Wildlife Trust (EWT) announced it was teaming up with Apopo on a pilot project aimed at detecting illegal pangolin and timber samples.

Cindy Fast, head of training at Apopo's Morogoro laboratory, says several rats have completed the early phases of a rigorous training program, though progress was delayed by legal snags in obtaining pangolin scales to train the rodents.

Nevertheless, the rats are hard at work, learning to "signal" the difference between African ebony wood and up to 18 other items commonly used to mask its odor in shipping, such as coffee beans and textiles. 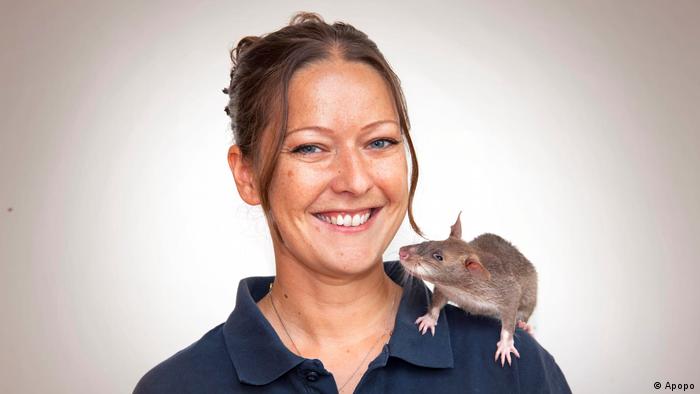 Dr Cindy Fast from UCLA has been conducting behavioral experiments with various animal species for more than 10 years. Since 2016, she has been head trainer at the Apopo training center at Sokoine University of Agriculture.

So how do you train a rat to find, and bring to the attention of a human handler, something fishy hidden in a shipping container? The bananas and peanut butter help, Fast explains.

Training starts very early for the baby rats, which are socialized to humans for one or two weeks before they are weaned from the mothers at six weeks.

The first phase involves "clicker training" where the young rats are taught to associate the delivery of a food reward with the sound emitted by a metallic clicker device held by the human trainer.

The trainers observe the rats closely as they scurry about a custom-built glass chamber. Inside the chamber there is a long metal tray with 10 separate compartments, all holding different target items, with small holes that allow the rats to get a good whiff of what they are searching for. 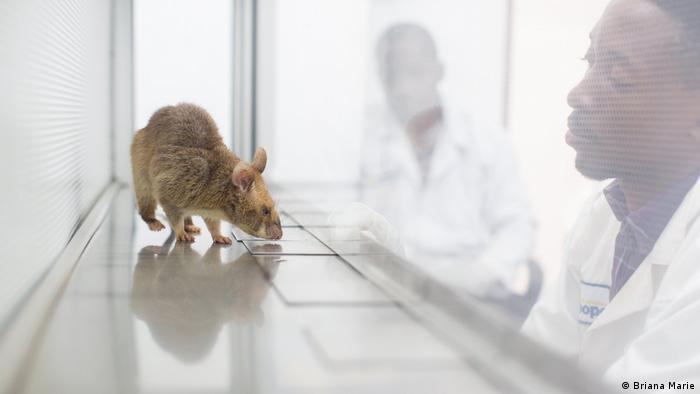 During the early stages of training, samples are placed in some of the 10 compartments - including samples of pangolin scales or ebony.

"The rats are trained using a standard learning and behavior principle of 'shaping,' whereby behavior is reinforced with a positive outcome," says Fast. "For our rats, the positive outcome is a tasty food reward."

To get this reward, there is a small aperture in the glass chamber which allows the trainer to feed them via a syringe. 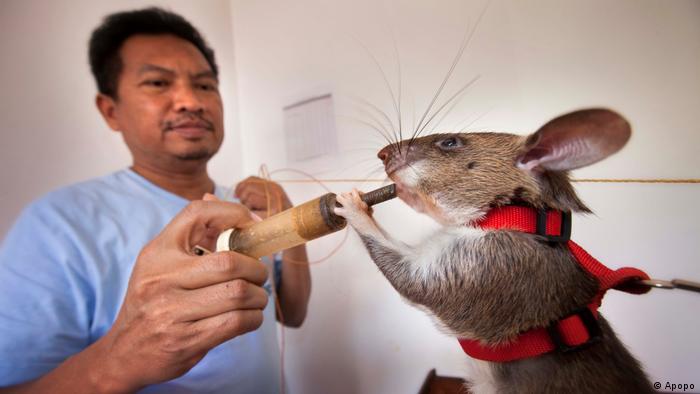 A sniffer rat is rewarded by trainer SokHeng Hul

"Once the rats reliably approach the feeding hole after the clicker is sounded, we then begin shaping their behavior within the training chamber.

"We gradually introduce non-target odors into the holes. The rats initially hold their nose over these holes, but when they fail to earn food for this behavior they gradually learn to rely on the smell of the item in the hole to predict when their response will earn them a reward."

Some of the Apopo rats have also been trained to scratch the floor with their feet to provide a visible signal to the handler.

But training rats to find rhino horn is still a way off.

"It is too early to speculate about timelines for training with other wildlife contraband," Fast says. "Before branching out we will need to complete the current laboratory, followed by the mock field environment proof-of-concept tests.

"Depending on the results from these phases, we might then conduct trials in a real field environment. This could take up to five years and must show promising results before expansion to other wildlife items would be reasonable." 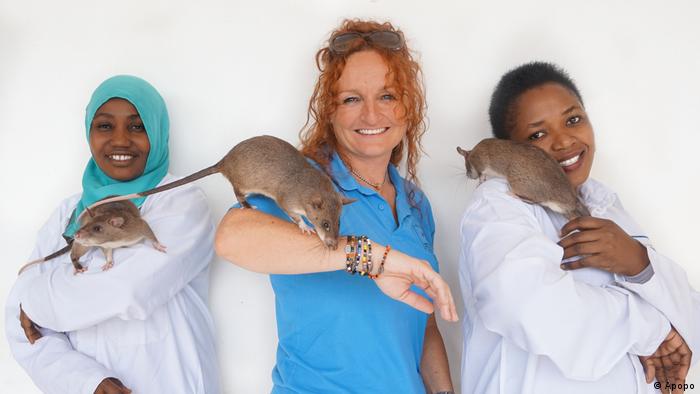 "So far the rats are proving their ability to detect target odors and I have no doubt that this experiment will be successful, but the challenge will be around how they indicate a suspicious discovery," says Pires.

One suggestion is attaching mini GoPro cameras to the rats, with a handler checking the live feed.

With these miniature sleuths are on their scent, wildlife smugglers will have to work much harder to cover their tracks.