The pangolin is under threat of being hunted to extinction by poachers in Southeast Asia's illegal wildlife trade, who hunt it for its meat and its scales. A new center in Cambodia is doing all it can to save the animal. 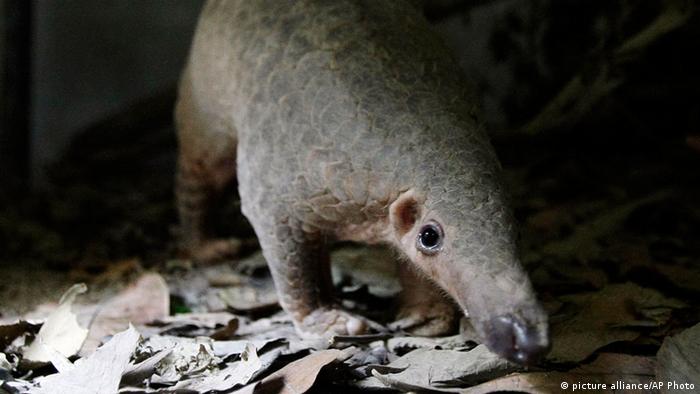 A week old baby pangolin sniffs at the air and snuggles down next to its mother. She curls around him to keep him warm. The mother pangolin is brown, scaly and about the size of a small dog. She's also missing part of her front limbs.

She was captured last year by hunters involved in the illegal wildlife trade. But, she was rescued by rangers and brought to the Pangolin Rehabilitation Center in Cambodia's Takeo province. The facility opened up at the end of last year.

Roth Utdom is the animal keeper at the center. Every day he carries a bucket of ants and termites into the outdoor cage, where the pangolins live. He's proud of the new pangolin baby. 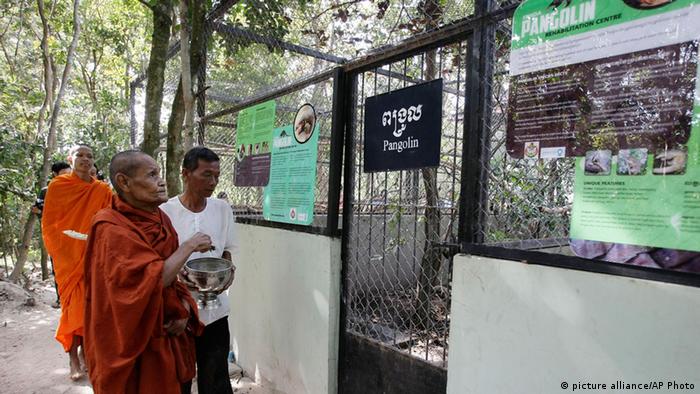 "I'm very happy to have raised the pangolins well enough that they can now breed,” Utdom told the news agency AP. "Pangolins are very difficult to care for."

Roth drops the termites and ants onto a plate and the pangolins dig in.

The keepers look after rescued pangolins which can't immediately be released back into the wild. Many of them are missing limbs because they were trapped in hunters' snares.

There is a huge market for pangolins in China, Vietnam and South Korea, where living specimens can sell for 75 euros ($100) per kilogram. Dry scales from the pangolin can fetch as much as 602 dollars ($800) per kilogram.

Pangolin scales are ground into powder and used as a remedy for a variety of ailments including rheumatism. It's also offered to new mothers to encourage lactation.

Nick Marx, who works for the Wildlife Alliance in Cambodia believes the biggest threat to wild pangolins nowadays is hunting. "They are so valuable," Marx told AP. "They fetch such high prices that they are very heavily hunted."

Marx said his group alone has confiscated more than 100 live pangolins from the illegal wildlife trade in Cambodia during the past decade. They have also seized countless dead pangolins, scales, foetuses, and pangolin body parts.

"They are slow moving and very inoffensive. They have no real defence and are easy to capture," said Marx. "They are also easy to transport." 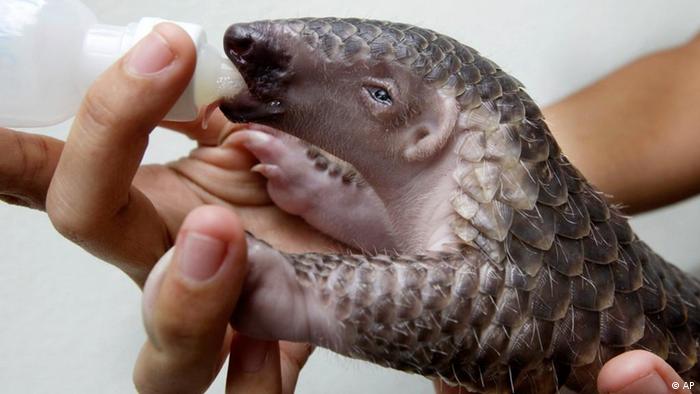 A baby pangolin is fed with milk by a zookeeper

Three of the pangolins currently living at the center were rescued back in June 2012 in Pursat province, in western Cambodia. Forest rangers were tipped off by members of the local community that someone had captured pangolins and was trying to smuggle them out of the forest in a car.

Peov Somanak of the Cambodia Forestry Administration told AP how the group of poachers were caught. At the scene, rangers reached under a car's fender and pulled out three nylon bags, tied off with rope. Inside each one, a pangolin had curled itself into a protective ball. Live pangolins fetch a better price on the market, so they are often kept alive after they are captured.

Somanak explains that the rangers don't release the creatures immediately after rescue any more because they are often injured and traumatized.

"We have often tried (in the past) to release pangolins into the wild without treatment. Most of them, we experienced, died after being released a few days," said Somanak.

CITES also has a role to play

The decline in the worldwide pangolin population comes despite an international ban on hunting the animal. The Convention on International Trade in Endangered Species of Wild Fauna and Flora (better known as 'CITES') strictly prohibits pangolin trade across borders.

At the CITES conference, which ended on March 14 in Bangkok, delegates gathered to discuss strategies for curbing the illegal wildlife trade. Simon Stuart, the chair of the species commission at the International Union for Conservation of Nature, was a delegate at the conference. In an interview with DW, he explained that CITES has delivered more power into the hand of animal protection groups. 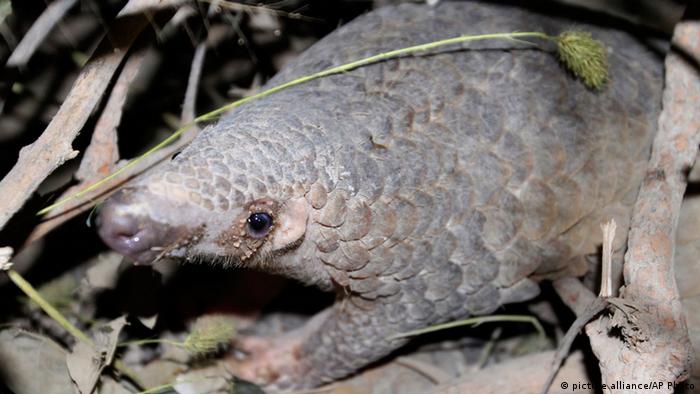 Pangolins are sometimes stuffed full of flour before being sold, in order to improve their weight and sale price

"There are a growing number of environmental groups in all of these countries that are getting fed up with the illegal wildlife trade," he said. "There’s also a negative incentive. CITES has the ability to impose trade sanctions on these countries if they don’t clamp down on the illegal trade and if they fail the inspections."

But, according to Stuart's organization, the pangolin has received very little conservation and research attention. There is limited knowledge of their ecology, biology and conservation needs. This means they rank low beside better-known cases of animal exploitation, such as the poaching of elephants for their tusks or shark finning.

Stuart says consumers need to be especially vigilant when purchasing products harvested from wild animals. He said that the IUCN's Red List of Threatened Species can provide guidance if people aren't sure which animals are being illegally exploited.

The premature death of at least 50 one-horned Indian rhinoceroses in the northeast Indian state of Assam has triggered concern among activists who call for improved conservation efforts. (21.01.2013)