Trump and May reaffirm commitment to NATO in White House visit

US President Trump has pledged "lasting support" to the UK after his first meeting with PM May. Trump reiterated his belief that torture works but will defer the decision on its use to Defense Secretary Mattis. 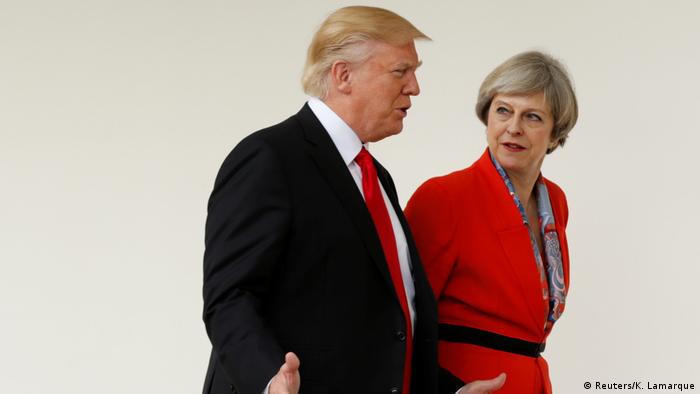 British Prime Minister Theresa May and US President Donald Trump held a joint press conference on Friday during the new president's first visit with a foreign leader.

The meeting signifies a pivotal moment in trans-Atlantic relations, which were rocked by Trump's election and his controversial comments concerning NATO and the United Nations.

May told reporters that Trump was "100 percent behind NATO" and that the two leaders reaffirmed their "unshakable commitment" to the military alliance.

'Torture doesn't work,' say those in the know

Trump's previous comments suggesting that Washington might not come to the aid of countries that did not meet their defense spending targets rattled European allies.

Trump also offered "lasting support" to the United Kingdom and said he will work with May to lay the groundwork for a bilateral trade deal between their countries. He said Britain leaving the European Union would be a "fantastic thing."

In response to a question concerning his views on torture, Trump said that although he believes torture is effective, he won't order the use of such interrogation methods.

Instead, the new US leader said he would defer the decision to Defense Secretary James Mattis, a retired general who strongly opposes the torture of prisoners.

"He has stated publicly that he does not necessarily believe in torture or waterboarding, or however you want to define it ...I don't necessarily agree," Trump said.

"But I would tell you that he will override because I'm giving him that power. He's an expert," added the president.

Mexico, US call about wall

Trump also said he had a "friendly" hour-long unscheduled phone call with Mexican President Enrique Pena Nieto on Friday, but asserted he would renegotiate trade deals.

The call came after Pena Nieto scrapped a meeting in Washington over Trump's insistence that Mexico will pay for a multibillion-dollar border wall. Mexico has insisted that it will not pay and balked at the Trump administration's suggestion yesterday that a border tariff would help cover the costs.

The Mexican presidency released a statement saying that both leaders agreed to not publicly discuss the issue over who will pay for the wall but called the call "constructive and productive."

During the press conference, the UK and US leaders attempted to highlight their common ground but clearly differed in their approaches to the continuation of Russian sanctions.

Prime Minister May took a tougher stance on the sanctions, saying that the UK wanted to see the measures remain until the 2015 Minsk agreement for a ceasefire in Ukraine was fully implemented.

Trump, on the other hand, said it was "very early to be talking about that" and said he wanted to have a "fantastic relationship" with Russian President Vladimir Putin, as well as other world leaders. He added that it was possible this may not occur. There have been concerns among European allies that Trump will lift the sanctions.

Russian President Vladimir Putin and Trump are likely to discuss sanctions when the speak on the phone on Saturday. Tensions are high in the over US intelligence agency reports that Russia meddled in the US election campaign. 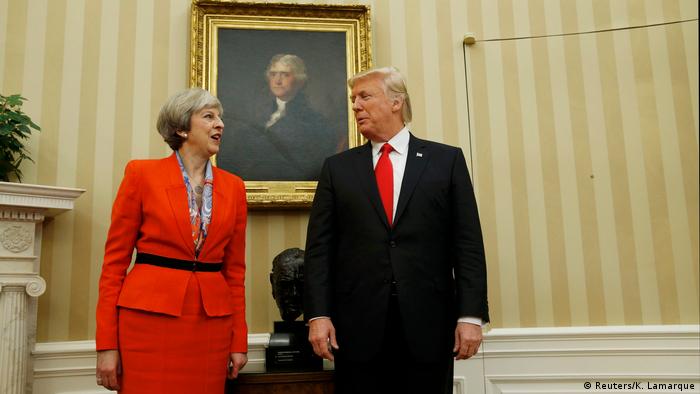 A Scottish cup and state visit for Trump

During Friday's joint press conference, the British prime minister announced that Trump accepted an invitation by Queen Elizabeth for a state visit later this year.

Earlier on in their meeting at the White House, Trump and May posed next to a bust of Winston Churchill in the Oval Office. Trump said "it's a great honor" to have the bust back in the office.

Contrary to prior accusations by current British Foreign Minister Boris Johnson, the former US President Barack Obama had not removed the bust from the White House, but moved it to another area of the building.

May was expected to give Trump an engraved ceremonial cup exchanged by Scottish highland chiefs, referencing Trump's Scottish ancestry. His mother was born on the island of Lewis. For first lady Melania Trump, May brought a hamper of apple juice, marmalade, Bakewell tarts and shortbread cookies.

British PM May turns to Turkey for trade talks

UK Prime Minister May is to meet with Turkish leaders in Ankara to discuss trade and security, a day after talks with the new US president. Her visit comes as the UK seeks to strengthen its hand in Brexit negotiations. (28.01.2017)