Troika says Greek crisis is worse than expected | Europe| News and current affairs from around the continent | DW | 24.10.2011

According to a report from the European Commission, the European Central Bank, and the International Monetary Fund, EU leaders need to reorganize Greece's financial rescue measures to stop a downward spiral. 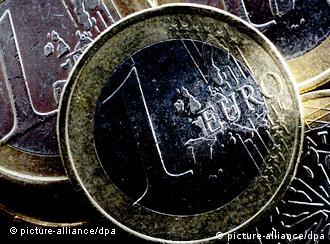 There are no simple fixes to Greece's problems

The collective report from the European Commission, the European Central Bank (ECB), and the International Monetary Fund (IMF), known as the troika, which was first shown to EU finance ministers and has now been revealed to the heads of state, reveals a true tragedy.

Greece will need further financial assistance from the international community for another 10 years before the country can start raising money again on the financial markets. Originally, Greece was supposed to be back on track by 2013. The troika estimates that the financial needs of Greece in the next decade will be in the region of 252 billion euros ($351 billion). That's in addition to the 110 billion euro bailout that has mostly been distributed since its approval in 2010.

In July, European leaders approved a second bailout of 109 billion euros. Around half of that amount is being covered by private creditors. Toc achieve this, private and state-owned banks are set to forfeit around 21 percent of the money they are owed from government bonds.

Since this will likely not be enough to make a long-lasting impact on Greece's debt, eurozone countries are calling on banks and other creditors to pull their weight even more. Debt relief of 50 to 60 percent is now being discussed, and negotiations are under way with the banks. 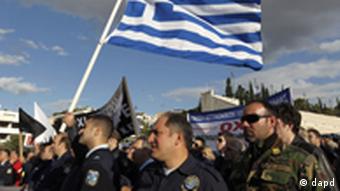 The austerity measures are not popular in Greece

If approved, the second Greek bailout would need to be raised from 109 to 114 billion euros.

German Chancellor Angela Merkel says that "Greece must be placed on a new foundation." Other European countries - with Spain and Italy being implied - must also be protected in this way.

The troika also said that despite the painful austerity measures and drastic tax hikes, the state of Greece's public finances has not improved. The deficit will remain at about 10 percent this year. Economic performance is collapsing, and many economists are warning that Greece is "saving itself to death." As economic performance continues to spiral downward, income from taxes sinks right along with it, while more unemployment benefits are paid out.

That's why it is becoming more and more difficult for Greece to get a handle on its debt, and why no investor has any interest in Greek government bonds. It's a vicious circle, and Greece is searching for a way out.

Despite the dire prognosis from the troika, eurozone finance ministers have decided to release the next 8 billion euro-installment of Greece's bailout package. Even the head of the IMF, Christine Lagarde, who took part in the negotiations in Brussels, gave her approval.

Releasing the funds stands in contrast to the previous position of the finance ministers, who only wanted to pay when Greece's debt sustainability had been proven. But according to EU diplomats, the remaining 16 eurozone finance ministers didn't have much of a choice. Had they not released the money, Greek Finance Minister Evangelos Venezelos would have run out of money to pay police officers and teachers before Christmas. The eight billion euros should last until at least the end of the year.

'Not just a Greek crisis'

In Brussels, Greek Prime Minister Giorgos Papandreou said the Greeks are a proud people who expect respect for their drastic austerity measures.

"Greece has shown time and again, that we can make the necessary decisions to make our economy more sustainable and in line with the rules," he said. "This has proven to be a European crisis, not just a Greek one." 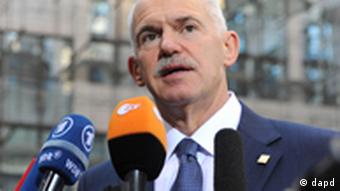 Papandreou says the eurozone is in this together

However, since Greece was the initiator of the European debt crisis, the Germans are arguing that the country should be placed under permanent monitoring by the troika. The quarterly visits for check-ups on Greece's finances cause too much disquiet and media interest. A better solution, argues Germany, would be a continual and therefore more subtle monitoring of Greece's budget.

It is already clear that even trimming Greece's public debts by 50 percent would only reduce the problems, not solve them. Debt relief, together with a bailout package, would reduce Greece's total debt from 160 percent today to 120 percent in 10 years, according to calculations from the EU.

That would still be twice as much debt as is actually allowed under EU agreements. The troika's report, according to one participant of the negotiations in Brussels, was a beneficial shock that showed everyone involved how critical it is that decisions are made.

EU leaders have been discussing solutions to the eurozone debt crisis in Brussels. Banks are to be propped up with government aid as a last resort. But other crucial decisions have been put off until Wednesday. (23.10.2011)

Europe's finance ministers have agreed banks must accept substantially bigger losses on their Greek debt bonds to ease the eurozone debt crisis. Banks could face writedowns of up to 60 percent on their debt holdings. (22.10.2011)

The looming second banking crisis raises the question whether banks have learned anything from the Lehman debacle only three years ago. They have indeed learned a lesson, writes Mark Blyth, but you may not like it. (17.10.2011)