Greece, Lehman, and the politics of Too Big To Fail | News and current affairs from Germany and around the world | DW | 17.10.2011

The looming second banking crisis raises the question whether banks have learned anything from the Lehman debacle only three years ago. They have indeed learned a lesson, writes Mark Blyth, but you may not like it. 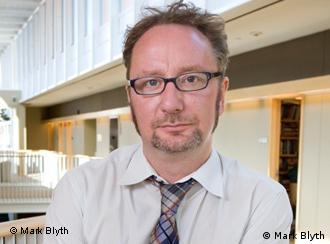 Mark Blyth is professor of International Political Economy at Brown University in Providence, Rhode Island. He is currently working on a new book that questions the political and economic sustainability of liberal democracies, called "The End of the Liberal World?"

The collapse of Lehman Brothers in 2008 introduced three new concepts to the public: Moral Hazard, Systemic Risk, and Too Big To Fail. The first was well-known but misunderstood, the second wasn't supposed to exist but did, and the third has helped morph the legacy of the 2008 banking crisis, the explosion of government debt across Europe, into a secondary banking crisis with a pernicious twist that is perhaps the real lesson of Lehman.

Before the 2008 crisis, 30 years of "markets-are-good" thinking produced an understanding of the economy where agents with rational expectations reacted to "the fundamentals" to produce efficient market outcomes. Armed with such ideas, regulatory authorities let banks regulate themselves. After all, it was their "skin in the game," so who better than the self-interested banker to look after the interests of the bank?

This way of thinking presumed that the risks banks took were both calculable and individual. The risks one bank took did not impact the risks the others took. Bank "A" was riskier than bank "B" given their assets, hedges, and strategies. So, the thinking went, if we make individual banks safe, best achieved by letting them manage their own risks, then we make the system of banks safe.

The only remaining regulatory problem was to make sure that if banks got into trouble they were not bailed out. Doing so would generate moral hazard: the general expectation of bailouts. This would lead to excessive risk taking by all banks because the costs of the bailout would fall on the public while the benefits of excessive risk would reside in the bank. Lehman Brothers was the poster child for moral hazard thinking. The US regulatory authorities let Lehman fail so as not to generate moral hazard. The immediate result was everyone discovered something that shouldn't exist: systemic risk.

Systemic risk is the risk that cannot be seen before the system fails because it comes from the inter-linkages of the system's parts. When Lehman failed anyone who sold Credit Default Swap protection or held Collateralized Debt Obligations containing similar assets to Lehman was immediately impacted. Bank "A's" risk, it turned out, was Bank "B's" risk after all through the daisy-chain of counterparty responsibility. Lehman's failure rippled through the system, impacting instruments and assets ostensibly unconnected to Lehman. Calculable risk gave way to blind panic as investors sought protection from the unknown.

The birth of immoral hazard

Fearing the meltdown of the global payments system the lesson of Lehman was quickly learned: some banks were "too big to fail." The conventional view of moral hazard didn't take account of that possibility: that one firm could bring down the whole system. Once you admitted that possibility, the insurance policy the regulators didn't want to issue became a de facto guarantee and a license to print money. Moral hazard, like risk, was no longer an individual property. It too went systemic. It became an immoral hazard.

Fast-forward and the consequence of bailing, recapitalizing, plugging revenue gaps has been the transformation of the private bank debt accrued in 2008 into the public debt of 2011. We are lectured that this is the result of profligate spending, and that is true in part - the spending was on the banks. But the origin of the eurozone crisis goes back to core banks' purchases of sovereign debt a decade earlier.

Germany is the China of the eurozone

When the euro was introduced German dominance of the European Central Bank allowed the periphery to get Germany's credit rating with the result that while core/periphery yields narrowed there was still a spread, and if you were a core bank, you could dump all your boring low-yield German and Dutch debt, load up on periphery debt (since it was all guaranteed by the ECB) and pocket the spread times a few billion exposures.

Doing so pumped massive amounts of core savings into periphery markets, which enabled them to buy goods from the core. As China is to America, so Germany is to the euro periphery: the money pump that criticizes the buyer of their products.

When the periphery was hit by the crisis in 2009 and investors figured out the ECB wasn't a real central bank since it had no lender of last resort function, periphery bond yields exploded as prices fell. Core banks that had loaded themselves with periphery debt a decade earlier now found themselves horribly exposed.

If any of the periphery states defaulted it would trigger a bank run around the eurozone that would end up back on the balance sheets of the core banks of France and Germany who held as much as 20-30 percent of GDP in these bonds. But that is not all. The systemic inter-linkages hidden in sovereign and bank CDS contracts, European short-term bank debt exposures, and above all, sovereign bond haircuts, each threaten to overwhelm the balance sheets of the core banks, which is why a sovereign debt crisis is now a secondary banking crisis in waiting.

There are two ways to avoid this crisis. The first is to build an effective European quasi-treasury through an expanded European Financial Stability Facility (EFSF), pool risk in eurobonds, reduce the real debt of the periphery, and stop squeezing via austerity the very economies that can only pay back the debt if they grow out of it. Given the politics of the moment none of this is likely to happen. So the second-best solution, if you cannot get out of the way of the coming flood is to build higher flood defenses, hence the call for European banks to recapitalize.

But recapitalization presents the core banks with a problem: less profit. If you have higher capital reserves, you have less working capital with which you can trade and lever-up. In short, you would much prefer the periphery to pay down debt so you can avoid the haircut, and you would much prefer the EU to throw cash into the EFSF than expect you to build a bigger seawall.

So we face another Lehman moment. The sea is rising and the wall isn't high enough so it should be in the self-interest of the core banks to take precautions and raise more capital to withstand the flood - right? Haven't they learned anything from 2008?

Actually, they have. They have learned from Lehman that they are now bigger and more systemically important than ever. So if they refuse to recapitalize, then the problem is simply passed back to the state to sort out.

Oddly, Germany's entire banking industry has just joined forces to attack the EU's recapitalization plan. In effect, playing the immoral hazard card. They know there is trouble coming, but sorting it out themselves would cut into profits. Far better to pass it back to the state with a reminder of the consequences of their failure. The lesson of Lehman has indeed been learned - it's good to be too big to fail.

We used to live in a world where banks bailed out sovereigns, but now sovereigns bail banks that are too big to fail - and the banks know it. Capitalizing upon this is now a business model. It's a truly immoral hazard.