EU leaders have been discussing solutions to the eurozone debt crisis in Brussels. Banks are to be propped up with government aid as a last resort. But other crucial decisions have been put off until Wednesday. 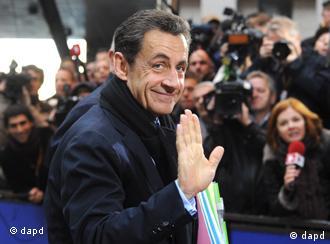 There was an air of bonhomie on arrival on Sunday

Despite the tough negotiations there was room for sentiment at the crucial European Union summit in Brussels. The meeting kicked off with an air of bonhomie as German Chancellor Angela Merkel gave French President Nicolas Sarkozy a teddy bear for his newborn daughter Giulia.

Merkel and Sarkozy continued in this harmonious vein at their news conference on Sunday, but there were no announcements on crucial decisions. Merkel again asked people to understand that those would not be made until the next summit on Wednesday.

"We have to be very thorough here and look at every detail carefully. But we also have to be determined. We are acutely aware of our responsibility," Merkel said.

What is clear is that Greece needs debt relief on a much bigger scale than first thought, possibly of up to 50 percent. Some European banks will need capital injections to be able to survive such drastic losses - a situation that would be exacerbated if bigger countries like Italy had problems on a similar scale. 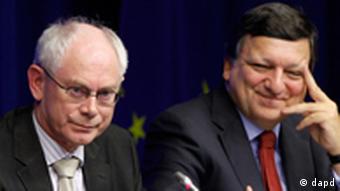 When the banks were rescued after the Lehman Brothers collapse in 2008, each European country looked after its own banks, but that is all set to change, as some state guarantees would simply no longer be enough.

And that calls for a European solution, although nobody yet knows what exactly that solution will entail. It's clear though that the banks will have to boost their equity by more than 100 billion euros ($139 billion), ideally without burdening taxpayers further.

"The banks have to make an effort to boost capital of their own accord," Merkel said. "If that doesn't work, national governments will have to help. And if a country can't provide that help, we should consider using the EFSF [European Financial Stability Facility] if some kind of collateral can be provided."

But France and Germany are still arguing about how to boost the EFSF so that it can actually provide that aid.

Meanwhile pressure is growing against Italian Prime Minister Silvio Berlusconi to speed up efforts to reduce the deficit. At 120 percent of gross domestic product (GDP), Italy has the highest level of debt after Greece. Usually, a debt rate of 90 percent of GDP is already seen as critical.

Merkel, Sarkozy, EU President Herman van Rompuy, and EU Commission President Jose Manuel Barroso have all been leaning on Berlusconi over the weekend, because they believe his efforts to consolidate Italy's debt are not enough to get the country out of the firing line.

After talks with Sarkozy and Merkel, Berlusconi joked that he had never failed an exam before. Merkel said it was a talk "among friends," which was taken as a sign of candor. 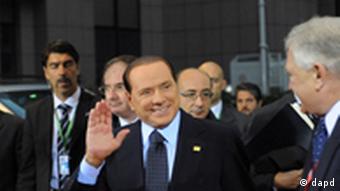 Berlusconi came under a lot of pressure over Italy's huge debts

Eurozone governments agree that budgets and economic policy have to be more coordinated and that discipline is essential so that imbalances and indebtedness do not get out of hand.

British Prime Minister David Cameron, however, fears that non-euro countries will be affected by common eurozone decisions, without having any influence themselves. Barroso has a similar view.

"There must not be a split between the eurozone and the rest of the EU," he said.

But Cameron added he was glad that Britain had decided to keep the pound. Swedish Prime Minister Fredrik Reinfeldt agreed. "There has probably never been greater support for the Swedish currency," he said.

EU leaders at the summit barely saw the small number of 'Occupy' demonstrators gathered outside the barriers at the summit venue. But the leaders are very much aware of the protests against austerity measures in countries with weaker economies, like Portugal, Greece and Spain.

"Merkel and I have are finding ourselves responsible for decisions affecting countries where nobody voted for us," Sarkozy said about his role as the disciplinarian in Europe. "Everybody has to understand that that throws up democratic problems. There are a lot of social problems and suffering in those countries."

Opinion: The debt party is over

Bank recapitalization, financial levers, and the Greek bailout are all topics at the Brussels summit. But politicians should be talking about how to get out of the 'debt economy', says DW's Christoph Hasselbach. (24.10.2011)

According to a report from the European Commission, the European Central Bank, and the International Monetary Fund, EU leaders need to reorganize Greece's financial rescue measures to stop a downward spiral. (24.10.2011)

The Greek parliament has granted the wish of international creditors and passed a further set of harsh austerity measures, much to the dismay of protesters who took to the streets in a second day of demonstrations. (20.10.2011)