Lawmakers have passed a bill to outlaw the centuries-old Muslim practice of instant divorce in India. While conservative Muslim sections slammed the move, liberal groups hailed it. Murali Krishnan reports from New Delhi. 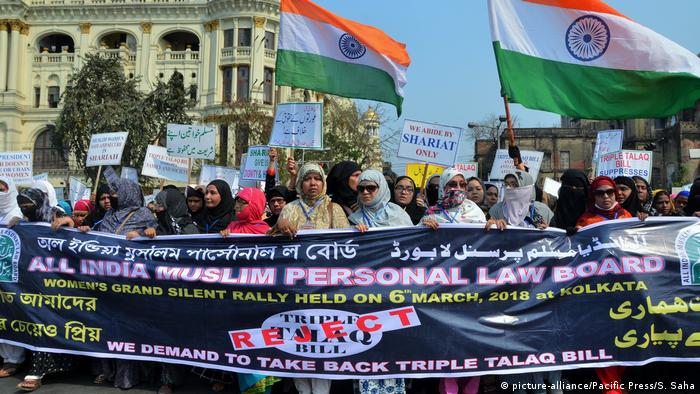 The victory for the government was a narrow one, as lawmakers in the upper house supported the bill by 99 votes to 84. The more powerful lower house approved the bill last week.

For over a year, the Hindu nationalist Bharatiya Janata Party's (BJP) government had been trying to criminalize the practice of "triple talaq," in which the husband utters the word divorce three times in succession to his wife to end the marriage.

PM Modi lauded the parliament for putting an end to the "archaic and medieval practice" and correcting a "historical wrong."

The "triple talaq," or instant divorce, practice has been denounced by rights groups and feminists — Muslims and non-Muslim feminists alike — as a violation of human rights. There have been complaints about Muslim men divorcing their wives over text messages, Skype, emails and phone calls.

Many Muslim-majority countries, including India's neighbors Pakistan and Bangladesh, have already banned "triple talaq." But the practice was permitted in India as the country's constitution allows different religious groups to set their own laws governing matters like marriage, divorce, maintenance and inheritance.

The government first tabled the legislation in the Lok Sabha (lower house of Parliament) in December 2017, following a Supreme Court judgment in August of that year, which ruled that the practice was a violation of the fundamental rights of Muslim women and the basic tenets of Islam. But the ruling BJP party could not pass the bill because it did not have the requisite support in the upper house.

Many Muslim politicians and some opposition parties have denounced the passage of bill. The Indian National Congress, the main opposition party, demanded that the bill be sent to a parliamentary committee for further deliberation and scrutiny.

Critics of the bill say that a three-year jail term for people practicing instant divorce could be misused to target Muslims.

Supporters of the practice argue that the issue has deliberately been made controversial by Modi's BJP. They say that Hindu nationalists want to interfere in Islamic faith and practices with the aim of homogenizing India.

S Q R Ilayas, a member of the All India Muslim Personal Law Board (AIMPLB), dubbed the bill "very dangerous."

"Who will take care of the wives and children once the husband goes to jail?" he questioned.

The AIMPLB's opposition to banning instant divorce mainly stems from its staunch resistance to any government involvement in Muslim affairs, which it says is needed to preserve the community's distinct identity in Indian society.

The organization feels triple talaq has acquired focus because the Modi administration wants to interfere in their religious affairs with the aim of introducing a uniform civil code in India.

Some liberal groups also find the legislation discriminatory. "Why should only Muslim men get punished for abandoning their wives; why not Hindu men also?" asked Kavita Krishnan of the All India Progressive Women's Association.

"This cannot be a criminal offense," Shabanam Hashmi, a feminist activist, told DW.

Opposition parties are planning to request the president not approve the bill.

A 'sigh of relief'

But many Muslim organizations also hailed the decision. The Bharatiya Muslim Mahila Andolan (BMMA), a women's rights organization that spearheaded the abolition of triple talaq, said the ban was "long overdue."

"We have been fighting against the subjugation of women in the name of religion. This law will provide relief to thousands of women. It is historic," Zakia Soman of the BMMA told DW.

Sofia Khartum, another Muslim women activist, told DW that finally the "fear of instant divorce is no more."

"We can now take a sigh of relief. I know thousands of women who have suffered due to the practice of instant divorce," she said.

Women's rights groups and activists say that Muslim organizations should not bring religion into the instant divorce debate as it is a human rights issue. "There is no place for triple talaq either in any civilized society or even in Islam. But in India, the people who claim to be the torch bearers of Islam have been forcing this down. They have kind of validated this triple talaq," says Shabnam Hashmi, the founder of ANHAD, an organization that fought to have the practice abolished.

"Issues of identity and economic survival have put the basic rights of women on the backburner. Definitely there is politics and there are patriarchal vested interests in continuing instant triple talaq," Maimoona Mollah of the All Indian Democratic Women Association told DW.

Activists fear that even after the parliament's decision to outlaw the custom, domestic abuse will not end in India. They argue that it's necessary for the government to strictly enforce measures to improve literacy levels among Muslim women and raise awareness of the laws put in place for their empowerment.