A march organized by far-right groups for Poland's Independence Day has drawn thousands onto the streets of Warsaw. The event has grown over the past years amid reservations about Western liberalism. 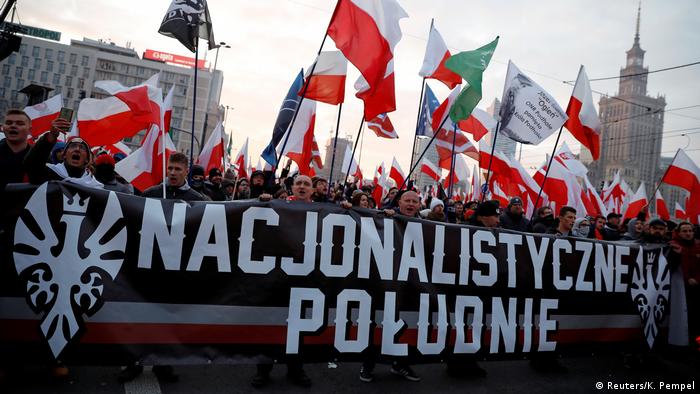 Tens of thousands of Poles on Monday took part in a march in Warsaw organized by nationalist groups to mark Polish independence.

Although the yearly march is organized by far-right bodies, many families have also joined the event in recent years, seeing it as a simple display of patriotism. City authorities estimated the number of participants at 47,000, while organizers boasted a far greater tally of 150,000.

The symbol of the march this year was a raised fist holding a rosary, which the organizers called a symbol of Roman Catholic resistance to growing calls for gay rights in the country.

"We have to return to our roots. Our world has abandoned God and Christianity," Robert Bakiewicz, the head of one group organizing the march, told participants. "We will die as the nations of western Europe are dying."

Some marchers chanted "No to the European Union" as they proceeded through the streets of the Polish capital. 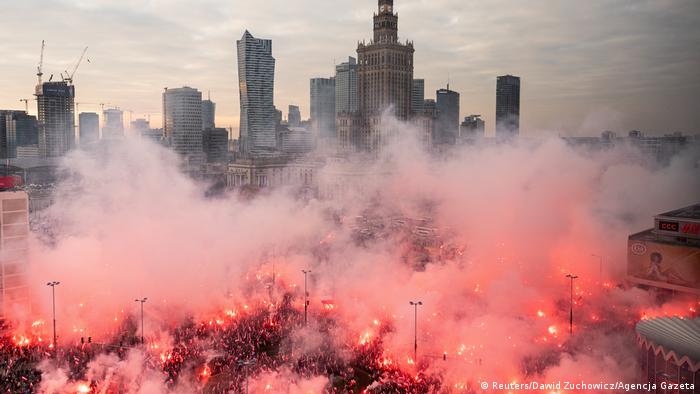 Marchers let off red flares, with red one of Poland's national colors

Two years ago, there was international outrage after some participants carried banners with white supremacist slogans.

Last year, which was the 100th anniversary of Poland's independence, leading government figures also joined the march, though they walked ahead of the main crowd to dissociate themselves from the nationalists.  Their participation was seen widely as a bid by the ruling conservative Law and Justice (PiS) party to win over the hard-right nationalist groups and prevent them from forming a political party of their own.

The bid failed, however, with hard-line nationalists in 2018 creating a party now called Confederation that won 7% of votes in October elections, gaining a place in parliament for the first time.

This year, PiS leaders steered clear of the march, with the party holding its own separate events to commemorate the anniversary.

The PiS came to power in 2015 espousing the revival of Catholic and patriotic values and a rejection of Western liberalism, tenets that are seen by some as dangerously close to those of the far right.

The commemorations were all held to mark the anniversary of the establishment of the second Polish republic in 1918 after 123 years of foreign rule.

New legislation tabled by the right-wing Polish government would ban sex education and criminalize "the promotion of underage sexual activity." Teachers who flout the ban could face up to five years in prison. (16.10.2019)

Left-wing parties have held a rally in the Polish city of Bialystok against homophobia. An LGBT rights march in the city last week came under attack from far-right groups. (28.07.2019)