Final results from the parliamentary election confirm the conservative Law and Justice party has won a narrow majority in the lower house. PiS also fell shy of the lower house seats needed to overhaul the constitution. 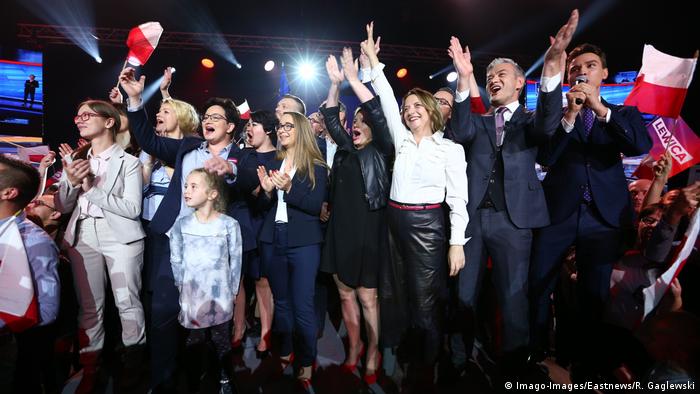 The conservative Law and Justice (PiS) party has narrowly won Poland's legislative election, according to final results, falling short of the landslide victory it would have needed to overhaul the constitution.

PiS also retained 49 seats in the 100-member Senate, with opposition parties taking the slim 51-seat majority. But in the more powerful 460-member lower house, the Sejm, PiS held on to the 235 seats necessary to retain its majority.

Opposition leader Katarzyna Lubnauer tweeted that PiS' domination of the Senate was dead: "Thanks to the agreement of opposition parties, the opposition will have the majority."

With a majority in the Senate, the opposition can now block or delay PiS legislation and torpedo nominations to some of Poland's highest institutions, such as the civil rights ombudsman.

But Law and Justice leader Jaroslaw Kaczynski said that support from voters was a clear message for the party to continue pushing for its policies, such as a judicial overhaul that the EU condemned as a threat to the rule of law.

The EU has previously taken Poland to court for gutting the judiciary, and officials from across the bloc have criticized PiS' exclusionary policies.

According to a report from the Organization for Security and Cooperation in Europe (OSCE), a democracy monitor in which 57 countries participate, coverage by state media favored the PiS in the run-up to Sunday's elections. Jan Petersen, the head of the election observation mission, said observers had noted a high level of polarization in the public and private media.

Petersen said voters' ability to "make an informed choice was undermined by a lack of impartiality in the media, especially the public broadcaster." He said rhetoric used by "a number of leading political figures is of serious concern in a democratic society."

Recently the PiS has targeted LGBTQ+ communities to fire up its Catholic base, calling equality efforts an "invasive foreign influence" and attempting to tie them to the Soviet domination of Poland through 1989. The OSCE reports that the PiS also used state media as a mouthpiece to praise its own candidates and cast opponents in a negative light.

In a further sign of deepening divisions, the Confederation Liberty and Independence — a catchall for laissez-faire capitalists, euroskeptics and nationalists — won seats in parliament for the first time, narrowly topping the 5% threshold needed to enter the legislature.

Partial results show significant losses for the dominant conservative and center-left blocs, while the Greens, Liberals and euroskeptic parties made gains. The European Parliament is set for a new balance of power. (26.05.2019)

Robert Biedron is a politician for openness and a hero to Poland's left. The challenge the current mayor of Slupsk poses to the country's establishment has drawn comparisons to French President Emmanuel Macron. (10.09.2018)