Homophobia in Poland still deeply entrenched | Europe | News and current affairs from around the continent | DW | 23.07.2019

Homophobia is more widespread in Poland than in most other eastern European countries, research suggests. But there is also a sense of optimism in the LGBT community despite efforts by conservative MPs to undermine it. 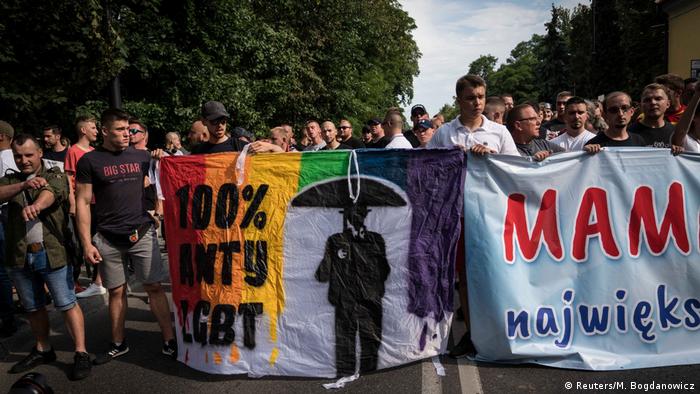 When Polish writer Jacek Dehnel was a still in school, there were officially no homosexuals in the country. "A few years ago," he tells DW "I returned and saw openly gay couples; everybody knew about them." Dehnel, born in 1980, last year married his partner, fellow writer and translator Piotr Tarczynski, in London – as same-sex marriages are not permitted in Poland. But Dehnel concedes that much has improved lately. Today, he says, there are openly gay and transsexual MPs and mayors in Poland.

Even so, LGBT people are frequently insulted and attacked. Dehnel tell DW that "local lawmakers keep proclaiming that certain parts of Poland are now LGBT-free – just like areas were once declared Jew-free." The writer says this is extremely hurtful, even for those with particularly thick skin. Dehnel therefore urges LGBT to support each other, and to publicly come out.

At last week's first ever Pride Parade in the Polish town of Bialystok, Dehnel witnessed how deep-rooted and virulent anti-LGBT sentiments still are. Polish nationalists and hooligans insulted and spat at the protesters. They hurled rotten eggs, fireworks, stones and even urine-filled bottles at them.

On his Facebook page, the author described the scenes unfolding before his eyes: "We can see how about 10 meters away a group is being attacked by thugs. A tall man wearing a red balaclava covering his entire head is kicking people, including teenage girls. Some run away, and other angry 'knights' show up." 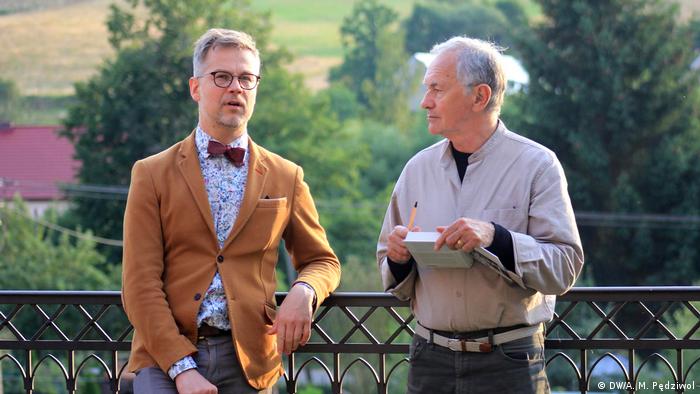 Dehnel, who was meant to hold an opening speech at the parade, had to wait until Polish police officers had finally brought the situation under control. He says "I am neither a protest-march speaker, nor a gay-rights activists, nor an old sage – but merely a writer, who happens to be gay."

Poland's conservative politicians are partially to blame for homophobic incidents like these. These lawmakers "tap into their voters' prejudices to stoke fear of a supposed threat," explains Michal Bilewicz, the director of the Center for Research on Prejudice at Warsaw University. He says that in 2015, they engaged in fear-mongering against migrants. In 2018, they targeted Jews (in the context of a heated international debate over the controversial amendment of Poland's Institute of National Remembrance law), and most recently stoked hatred of the LGBT community.

Bilewicz says that "in Poland, homophobia indicators are higher than in western Europe and even other parts of Eastern Europe – with the exception of Russia and the Caucasus." Bilewicz explains that "75% of Poles say they do not know any homosexuals." This is particularly true for Poland's Podlasie province, where the town of Bialystok is located. In this part of Poland, few LGBT people are open about their sexuality for fear of negative repercussions.

Michal Bilewicz says that "when there are no direct encounters between such people" there is no opportunity to reflect on one's prejudices. This, he says, leads to the problem that "politicians then declare migrants, Jews or LGBT people to be enemies." Which, in turn, leads to violence. Bilewicz therefore says "the best cure against prejudice is to know someone from this group, like a neighbor, salespersons or teacher." Then, he says, people soon realize we are not all that different from one another.

Poland at a crossroads

Jacek Dehnel says Polish society has become more liberal in recent years – despite the electoral victory of the national-conservative Law and Justice (PiS) party four years ago. According to a recent survey, 56% of Poles say they approve of civil partnerships, while 41% back same-sex marriages. Dehnel recalls that "10 years ago, just 16% were in favor."

And in spite of the violent clashes at last weekend's Bialystok Pride Parade, he is optimistic about the future: "There used to be just two or three such marches per year in Poland; this year there will be 25."

He says the Bialystok and Lublin marches were a first, and that a few years ago, holding them there would have been unthinkable. Dehnel says today, more and more LGBT people are coming out. "Some do this to become role models for teens who are still unsure about their sexual identity," he explains. Adding that role models are very important, as "LGBT teens are six times more likely to consider suicide than their non-LGBT peers – and we know that thinking such thoughts often lead to the real thing." This is what Jacek Dehnel underscored at his Bialystok Pride Parade speech.

He says Poland is at a crossroads: "Either there will be a liberalization, just as there was in deeply Catholic Malta, where after a political transition same-sex marriages are now legal." Or, he says, Poland will take the route of "Catholic fundamentalism akin to Islamist countries."