Mayor Rafal Trzaskowski said he wanted the city to remain "open" and "tolerant." The LGBT community in Poland has come under sustained attack in recent months by the ruling right-wing Law and Justice party. 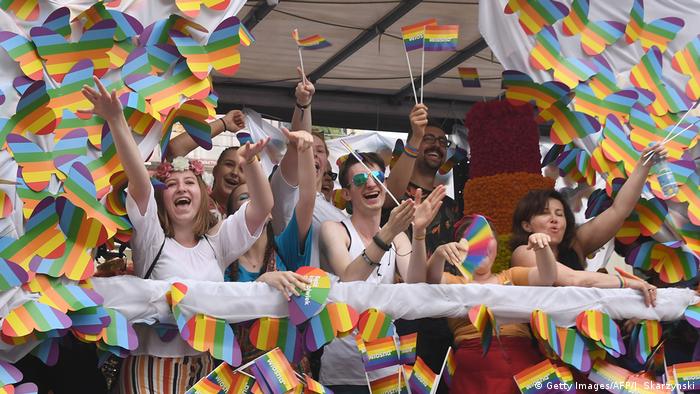 Tens of thousands of people marched through Warsaw with rainbow flags on Saturday, demanding equal rights for gays and lesbians amid government efforts to discredit the LGBT movement as a threat.

Mayor Rafal Trzaskowski told a crowd of marchers that support for pride marches was commonplace in many European cities and that he wanted the Polish capital to remain "open" and "tolerant."

"Not everyone has to go to the Equality Parade but everyone should respect minority rights," he said.

Trzaskowski thanked diplomats who attended the march from several Western countries, including the United States and Canada.

City officials said some 47,000 people showed up to the event, the largest gay pride parade in Central and Eastern Europe.

Poland's right-wing government has rejected calls for recognizing equal rights for same-sex couples as a threat to traditional family values.

The leader of the ruling Law and Justice party, Jaroslaw Kaczynski, has described the LGBT community as a foreign import. Several conservative town councils have designated themselves "LGBT-free."

"There is lots of hate in the public media and by the ruling party, but you also have a growing movement of people realizing we are fighting for our lives," Hubert Sobecki, leader of the Love Does Not Exclude group that supports marriage equality, told The Associated Press.

In neighboring Lithuania, some 10,000 people took part in a pride march in the capital, Vilnius. Several thousand people also attended a similar parade in the Bulgarian capital, Sofia.

Lesbians attacked on London bus for refusing to kiss for men

Four men have been arrested after two lesbians were beaten up in what London police have called a disgusting homophobic assault. One of the victims described how the men taunted and punched the couple before fleeing. (07.06.2019)

Taipei is due to take a series of decisive steps this week to legalize same-sex marriages before the May 24 deadline set by the island’s top court. However, deep divisions in public opinion may stall the process. (16.05.2019)