Taiwan set to legalize gay marriage despite legislative hurdles | Asia | An in-depth look at news from across the continent | DW | 16.05.2019

Taipei is due to take a series of decisive steps this week to legalize same-sex marriages before the May 24 deadline set by the island’s top court. However, deep divisions in public opinion may stall the process. 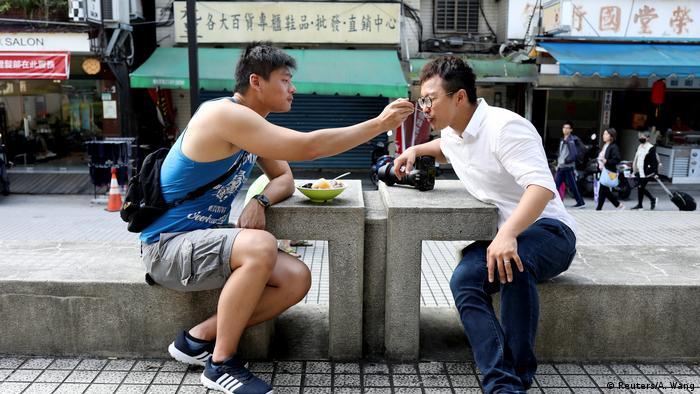 Over 1,500 pro-marriage equality supporters gathered outside Taiwan's legislature earlier this week as lawmakers tried to smooth out differences among three competing draft bills on same-sex marriage. Many of the protesters are hoping to be able to legally marry their same-sex partners on May 24, the deadline to legalize homosexual marriages mandated by Taiwan's constitutional court in a landmark ruling in 2017.

Gay rights organizations had hoped the government would legalize same-sex marriage by directly amending marriage clauses in the civil code, a step considered by many as the truest form of equality. However, the central government and Taiwan's ruling Democratic Progressive Party (DPP) failed to propose any law or changes that would pave the way for the legalization of gay marriages following the court ruling.

With the lack of government action, anti-marriage equality groups initiated a number of referendums last year and voters overwhelmingly backed the notion of defining marriage purely as a union between a man and a woman, leaving little support for the government to legalize gay marriages.

On Friday, the legislature will vote on three draft bills to determine the fate of Taiwan's three-decade-long fight for marriage equality. The government's bill is viewed by most gay rights groups as the most progressive because it is the only bill that uses the word "marriage" to define same-sex relationships and offers limited adoption rights to same-sex couples.

On the other hand, anti-marriage equality groups have proposed two other draft bills, which aim at using "same-sex union" and "same-sex familial relationship" to define a homosexual relationship, while only permitting a form of guardianship. One of the proposals even allows family members or relatives within three degrees of kinship from either side to request the annulment of homosexual relationships under the pretext of fake unions.

Hoping to reach a consensus on several controversial clauses, legislators gathered on Tuesday to closely review all three draft bills. However, discussions almost broke down after an opposition legislator backing one of the conservative draft laws claimed that he couldn't accept the government's version and demanded that his proposal be forwarded to the legislative session scheduled for Friday.

Additionally, legislators also failed to reach an agreement on critical issues such as the kind of relationship gay couples were permitted to have, how they would refer to each other and whether a person could adopt his or her partner's non-biological children. Since all three draft bills failed to address the issue of transnational partnerships, one of the opposition parties, New Power Party (NPP), proposed to exempt same-sex couples from government regulations that didn't allow Taiwanese LGBTQ individuals to have a legitimate relationship with partners from countries where gay marriage was not permitted.

On the same day, Taiwanese president Tsai Ing-wen came out to support the government's draft bill, calling it a version that combined demands from all sides. She admitted that same-sex marriage remained a highly divisive issue in Taiwan, but also called on all sides to respect different opinions.

Most anti-marriage equality campaigners do not approve of the draft bill proposed by the government, as the bill's second clause uses "same-sex marriage" to define homosexual relationships. In their opinion, it is clearly disrespectful of last year's referendum result. Yu Shin-yi of the Coalition for the Happiness of our Next Generation, an anti-gay marriage group, told DW that the government was "bullying" the public's opinion by proposing a draft bill that contained the word "marriage."

According to her, the government's decision of not including referendum results from last year was "a clear sign that they are prioritizing political consideration over the public's collective opinions."

Victoria Hsu, the chairperson of Taiwan Alliance to Promote Civil Partnership Rights, thinks the legislative session on Friday will become a "voting competition" between different parties. For her, the inclusion of the phrase, "same-sex marriage," and same-sex couples' adoption rights would be a test of the ruling party's commitment to the issue.

"If the legislature decides to use 'same-sex union' or other names to define same-sex marriage, it could cause same-sex couples to not be properly registered as 'married couples,'" Hsu explained to DW, adding that this "would be a clear violation of the constitution, and if it happens, it would mean the ruling party has failed to effectively utilize its majority in the legislature."

Hsu thinks the government and ruling party should also consider possible political responses to Friday's legislative decision, emphasizing that many have been expecting the legislature to pass a same-sex marriage bill that would put a temporary end to discussions about the divisive issue in Taiwan.

"The LGBTQ community and their supporters would be very angry if the legislature passed a same-sex marriage bill that's unconstitutional," Hsu said, adding, "In that case, I think the controversy could have an impact on the 2020 presidential election and put Taiwan's civil society, LGBTQ community and the ruling party in disadvantageous positions."